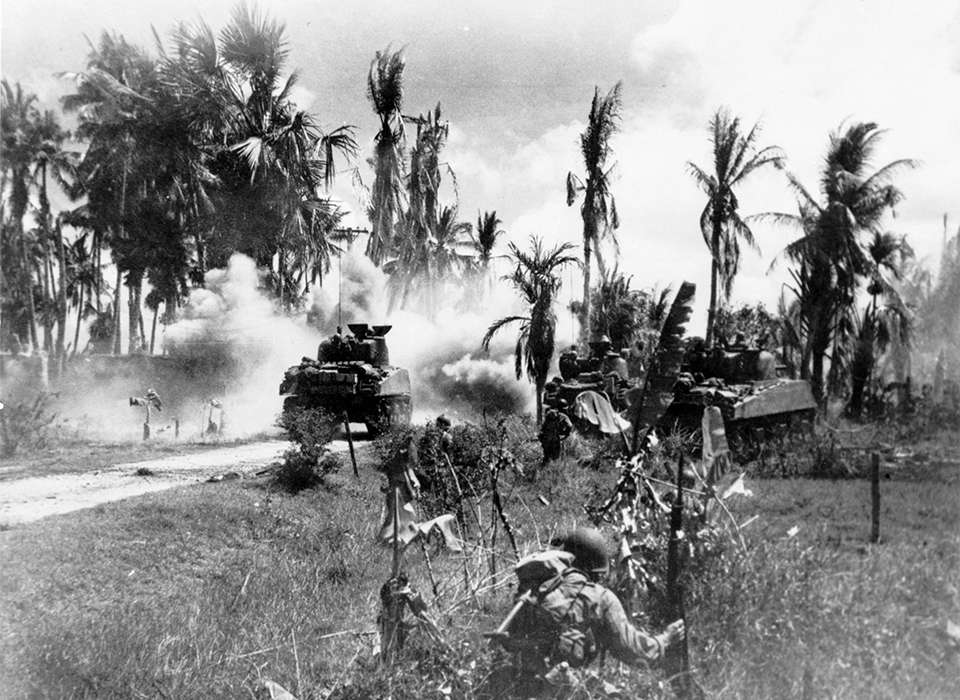 The final liberation of the Philippines came at the end of World War II in 1945. National WWII Museum. (Public Domain)
Books

When the Japanese bombed Pearl Harbor on Dec. 7, 1941, they had another strategic target as well. On Dec. 8, 1941, they bombed the Philippines, with invasions to the north and south of Manila that quickly followed. Thousands of American, British, and Filipinos would eventually be killed, tortured, or imprisoned.

Amid the horror of this war many heroes were born, often rising from humble beginnings.

Known for his works on history and the military, writer Robert Mrazek, who authored the Amerasian Homecoming Act, which brought 19,000 children of Americans who served in Vietnam to the United States, brings readers a heartfelt and stirring story of the unsurpassed heroism of a passionate young woman.

Triumph of the Human Spirit

Born in 1915, Loring May Ebersole (later to be called Florence) was the daughter of a Filipina mother and American father who fought in the Philippines during the Spanish-American War.

At the age of 7, Florence was sent with her sister Norma to Union Church Hall in Manila. Life for “mestizas” (half white and half Filipina) was not always easy. They were considered racially inferior, but Florence exceled in her studies and learned to be very resilient and independent; she overcame doubters. Her academic accomplishments and later commendable professional work ethic were hallmarks of a strong foundation and zealous temperament.

In 1941, in her early 20s, she landed a job as a civilian stenographer at the U.S. Army Intelligence Headquarters in Manila. It was here that she met her future first husband, Charles “Bing” Smith, who was working for the military’s counterpart in the same building, the Office of Naval Intelligence.

Their marriage did not last a year. Bing was killed in action in February 1942 when his boat was hit while supplying American and Filipino troops trapped on Corregidor Island and the Bataan Peninsula.

Florence did not immediately learn of her husband’s death, but with the headquarters shutting down, she knew that the resources Bing had left her wouldn’t last long. On her own, and with a strong survival instinct, she needed to find work in a city and country now under Japanese occupation.

Kiyoshi Osawa, a Japanese businessman, was put in charge of the Philippine Liquid Fuel Distribution Union. While the majority of his employees were Japanese, he had a fondness for the Philippines and didn’t have a problem hiring Filipino workers. Hiding her American affiliations, Florence was hired to work in the office handling vouchers for gasoline, diesel fuel, and oil distribution to local businesses and the public.

A Pivotal and Poignant Plan

Ironically and perhaps fatefully, during this time, Florence learned that her former boss, Maj. E.C. Engelhart, had been taken prisoner at Cabanatuan Prison and that he and his fellow POWs were being treated badly. Others had been sent to an internment camp on what had been the campus at the University of Santo Tomas. They were in dire need of medicine and food.

Florence wanted to ease their misery. Her heart was with her American and Filipino connections. Her hope was that the Philippines would be liberated, but they just had to hold out until that day arrived.

Intelligent and resourceful, it didn’t take Florence long to figure out that by carefully falsifying records at her workplace, she could divert gallons of fuel, a valuable black-market commodity, into money that could then be used to get medicine and food. She couldn’t do it alone. And that’s when she weighed the risks and connected with the Philippine Underground, a growing resistance movement.

It was a dangerous move. Testing her plan with an initial divergence of 25 gallons, Florence was gratified to learn that stealthy couriers managed to get money into the prison.

Always under tension and fear of discovery, Florence, together with her resistance collaborators, was eventually diverting 250 gallons a week. She was now a successful saboteur and impacting the lives of hundreds of POWs.

One Person Can Change Lives

The book is set against the historical background of the Pacific theater during World War II, and readers get an inside glimpse into the horrors and personal tragedies that ensued.

Beloved by many Filipinos and seen as their savior, Gen. Douglas MacArthur’s personal political ambitions come into conflict with President Franklin Delano Roosevelt’s. The larger picture of America’s resolve to win the war plays in the background as the riveting narrative focuses on Florence and her extraordinary heroism.

In October 1944, Florence was arrested, imprisoned, and tortured by her Japanese captors. Based on the details in the book, it was providential that she survived and never betrayed the resistance nor named individuals who helped her. Ultimately, she was sentenced to three years of hard labor.

Following the Battle of Manila, Florence was liberated by American forces in February 1945 weighing just 80 pounds.

Her story continued to a new life in New York, meeting Bob Finch, starting a family, and enlisting in the U.S. Coast Guard Women’s Reserve. She was one of the first Asian American women to wear a Coast Guard uniform.

Florence Finch was a war widow turned war warrior. Her incredible, long overdue, breathtaking story is inspiring. There were military accolades to follow, including the U.S. Medal of Freedom. Her grit, determination, compassion, and fight make her more than a historical hero. Florence Finch is a woman worth knowing, a strong woman who risked it all: a hero for all ages.