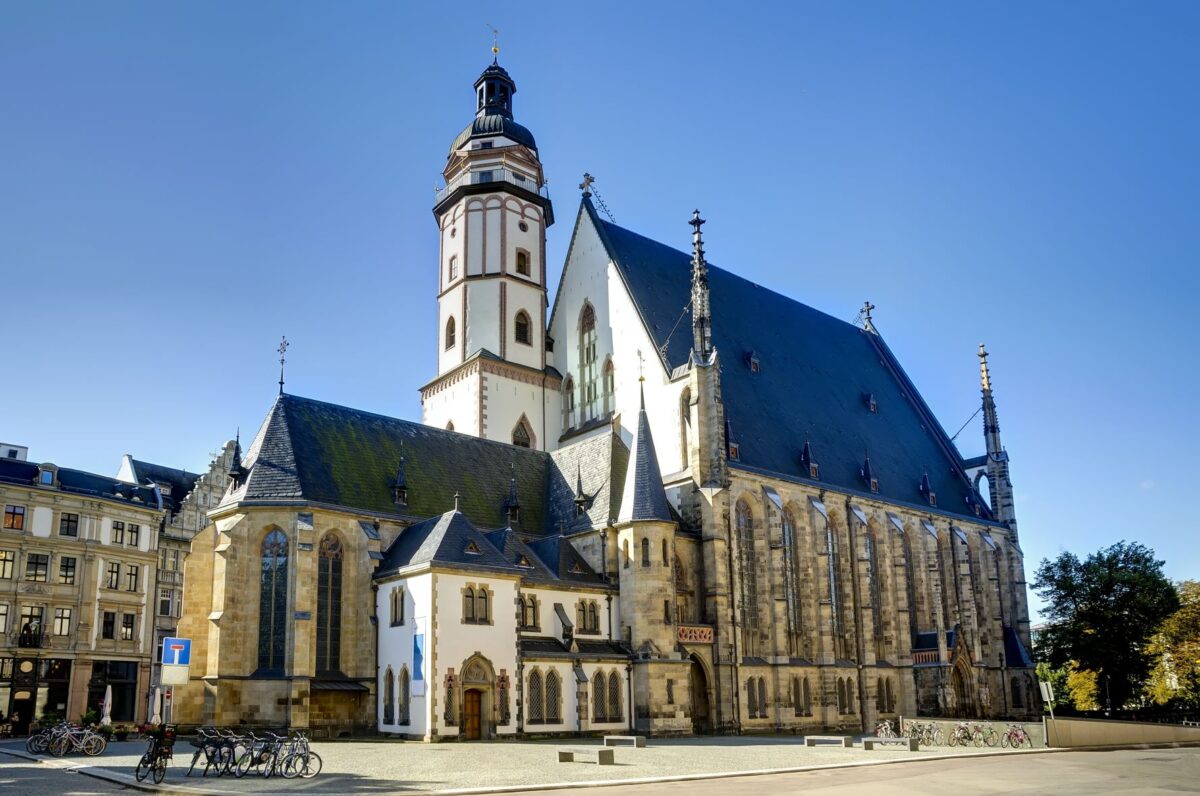 St. Thomas Church where Bach served as choir master and is the setting for "The Great Passion" by James Runcie. (Christian Draghici/Shutterstock)
Books

Book Review: ‘The Great Passion’: A Youth’s Introduction to the World of Bach

Classical music fans will relish this read. Anyone who has suffered the loss of a loved one will understand the depths of grief portrayed.

Together, the two major themes of glorious sound and unbearable sorrow fuse to create a heartfelt and moving narrative. Readers will be refreshed and renewed by this inspiring and faith-filled story set in Germany during the 1700s.

Heartstrings will immediately be pulled at the book’s beginning, where we find the grieving 13-year-old Stefan Silbermann. An only child, he has lost his mother. Stefan’s father, no doubt grieving himself, sends his son to a distant school, St. Thomas in Leipzig, advising him not to dwell too heavily on his mother and to embrace a new environment where he can study and learn.

However, Stefan is haunted by her absence. With his shock of red hair setting him apart, matters are made worse by bullying classmates. He feels unwelcome and unloved. His soul aches for comfort and sanctuary. He wonders how he will survive this place.

But St. Thomas is a place of religion and music. There is singing and the playing of instruments, and young Stefan is in the choir. His spirit is lifted.

Author James Runcie’s graceful and lyrical text is a treat. Here’s a sneak peek at Stefan soaking in a musical score along with a row of other young choristers:

“There were so many different entries, and it came in a rush of sound, as if the singers couldn’t wait to tell us the news of Christ’s resurrection. The prefect, Schmid, sung a tenor aria accompanied by an oboe played with such beauty and longing that I had a moment of hope, in which I imagined that nothing could harm me while this cantata lasted; not the fear of my new school, nor the loss of everything I had known and loved.”

Stefan catches the attention of the school’s cantor, Johann Sebastian Bach. This new pupil has a beautiful singing voice. Bach sees so much promise that he quickly elevates him from the choir to a soloist position.

Stefan’s life dramatically changes. As a strong disciplinarian, Bach literally forces the best from his young protégé while introducing him to a world of music that envelops him with promise and joy.

Being singled out as a stellar soprano brings with it envy from his classmates, most notably from David Stolle, the son of one of the area’s most famous bass singers.

Their relationship seems doomed to failure, marked by constant harsh confrontations and little solace for Stefan.

Under Bach’s caring but firm tutelage, Stefan’s musical prowess blooms and grows ever bolder. In addition to singing, he begins working as a copyist for the prolific Bach and his many musical works.

A saving gift for Stefan is when he is drawn into Bach’s immediate family and away from the cruelty of dorm life. Here, he finds comfort in Bach’s wife, Anna Magdalena, who becomes a surrogate mother figure, musical mentor, and friend. Bach’s eldest daughter from his first marriage, Catharina, invites Stefan on butterfly-collecting excursions in the nearby lush forests.

Much of Bach’s psyche remains a mystery in the novel, but as oboist Gleditsch remarks:

“He speaks in music. Always remember that about musicians. German is not their first language. Music is. That’s why it’s sometimes difficult to understand what we’re saying.”

Then, tragedy strikes when a member of Bach’s family dies. Faced again with the horror of death, Stefan takes solace in religion. Eventually, he witnesses that beauty can spring from the most profound losses.

Building to the Crescendo

As Easter nears in 1727, Bach launches vigorously into a new work: the “St. Matthew Passion,” a sacred oratorio for solo voices, double choir, and double orchestra, complete with libretto by poet Picander. This monumental undertaking sets the 26th and 27th chapters of the Gospel of Matthew to music with interspersed chorales and arias.

Readers will be drawn into the frenzy of its creation, the chaos for all those involved, and then the glorious and deeply moving performance that lifts everyone’s souls and calls forth salvation for young Stefan.

In “The Great Passion,” Runcie has created an imaginative and thoroughly compelling tour de force. Singing, playing, and hearing Bach’s music will be significantly enhanced from this read.