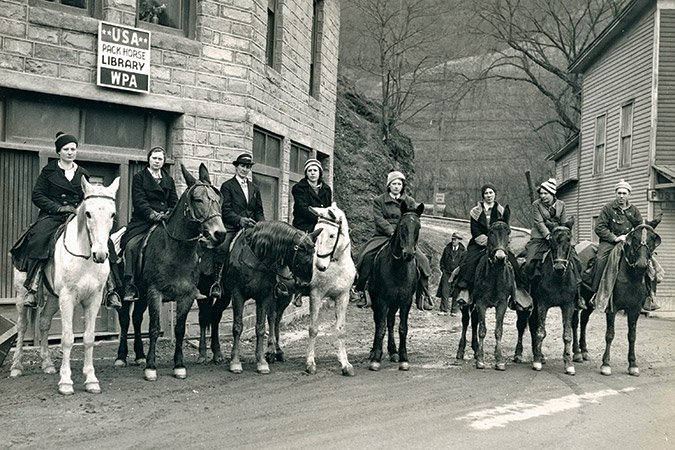 She carries the heritage of her mother, Cussy Mary Lovett, who delivered books to rural families some 17 years earlier under an initiative created by President Franklin D. Roosevelt: the Kentucky Pack Horse Librarian Project.

She also carries the stigma of being blue-skinned. Successfully hiding for years in the “hollers,” her parents are taken away to prison for their unlawful marriage and found guilty of miscegenation. At 16, the threat of confinement, perhaps in a reform institute, looms over her as well.

On the run and at the mercy of the rugged Kentucky hills and those who inhabit them, Honey has to use all her survival skills to stay free.

A consummate lover of books, she picks up where her mother left off, taking on routes through Appalachia to bring the written word to isolated individuals and families.

Able to support herself, earning a paycheck and staying clear of the law, Honey treads a treacherous trail full of threats and triumphs. The more she is on her own, the more she wants to stay on her own in a world dominated by archaic laws and narrow thinking.

Along her journey, Honey emerges as a new kind of heroine in her fierce, remarkable, soulful, and inspiring determination.

Set against the historical context of the mid-1950s in rural Kentucky where women were just beginning to pioneer jobs formerly held only by men, Honey befriends and defends her newfound women friends—her soul sisters.

Pearl Grant climbs to new heights as a fire tower lookout. Braving the elements, isolation, and often the contempt of her peers, Pearl becomes a steadfast friend.

Bonnie Powell descends to the bowels of the earth as a coal miner. Supporting her young son after her husband’s death, Bonnie’s tough demeanor masks a gentle heart.

Guyla Belle, the victim of abuse and an unhappy marriage, yearns for the knowledge that books will give her.

Amara Ballard, is a nurse with the Frontier Nursing Service. She assists with medical needs, a critical aide to the few doctors in the area.

Another, Loretta ‘Retta’ Adams, is old with poor eyesight. She’s a longtime friend of Honey’s mother, and Honey finds a temporary haven in her care.

Pack Horse librarians needed a mount. For Honey’s mother, Cussy, it was Junia, her constant, loyal, and protective mule. The feisty, four-legged creature is also Honey’s mount, ever ready to alert her to trouble on the trail, and always welcoming a homemade biscuit treat.

Honey’s young friend, Wrenna, a waiflike child that roams the hollers, has a pet rooster, Tommie. Aside from strutting his stuff alongside his young mistress, Tommie plays a fiercely pivotal role as a championing cock.

Author Kim Michele Richardson, who lives in Kentucky, has reached deep into her state’s history to create charismatic and unforgettable characters. While fictional, the backdrop of the Pack Horse librarians, blue-skinned people, and women pioneering in men’s roles is real.

The realities of that era are brought brilliantly to life through her use of language, setting, and character development.

Richardson understands the harshness of the Kentucky hills. She also has reverence for their mystery when she describes the “ancient breaths of the forests.”

She also appreciates the nourishing nature of its people. When Honey has had a hard day, there’s usually some chestnut corn bread, butter beans, or apple dumplings with tea offered to take the edge off.

This is the 1950s in rural America, and Richardson adeptly keeps her women strong-willed and resilient but not assertive or aggressive—beyond the boundaries of that era.

The reader will enjoy Richardson’s clever use of other book titles. Honey offers her friend Bonnie Powell, who is steeped in the darkness of the mines, a historical novel with a riveting romance titled “Gunnar’s Daughter” by 1928 Nobel-Prize-winning Norwegian author Sigrid Undset. It’s plenty to bring light to her life.

For Honey, a friend gifts her with Effie Waller Smith’s “Rosemary and Pansies,” a poignant classic read.

Where are the men? They are certainly interwoven throughout these women’s lives, but they aren’t all rascals. A few are downright bad eggs but there are enough decent, caring, and upright gentlemen to make up for their reckless spirits. Again, Richardson is masterful in presenting an accurate portrait of the era.

One endearing fellow is Devil John Smith. Honey’s mother encountered him as a moonshiner who didn’t take kindly to his wife and children spending their days reading rather than working. Cussy managed to cleverly bridge the gap between his stubbornness and his family’s thirst for knowledge.

With Honey, he is ever present and protective—a surrogate father of sorts—and a firmly entrenched believer in books.

Honey’s attorney, Bob Morgan, is her legal guru and steadfast mentor. There are courtroom scenes that Richardson no doubt heavily researched for their authenticity.

“The Book Woman’s Daughter” can be read as a standalone work or as a sequel to “The Book Woman of Troublesome Creek,” which was reviewed in The Epoch Times in 2021.

Readers won’t be disappointed. Richardson’s descriptions will have you feeling the drizzly, cold rain, seeing the mist rise against an early morning sun, and tasting the comfort of a homemade biscuit.

Richardson’s Kentucky roots run deep. She is also a consummate researcher and one who is passionate about the people of her state. She spares no details in addressing acute poverty and the sting of intolerance. She likewise celebrates the lush environment, good hearts, and the power of reinvention, redemption, and radiance.

The pages ring out with indomitable, strong voices from a time and place in history that was harsh and often soul-crushing. Yet hope prevails, tragedies turn to triumphs, and the human spirit soars from darkness to the light.

“The Book Woman’s Daughter” is Richardson’s fifth novel. She is a New York Times, Los Angeles Times, and USA Today bestselling author among her many honors. Country star and singing legend Dolly Parton gave her a big boost by recommending “The Book Woman of Troublesome Creek” in People magazine. “I’m in good company there,” Richardson said.

Special thanks to The Open Book in Warrenton, Virginia, for providing an Advanced Reader’s Edition courtesy of Sourcebooks Landmark.