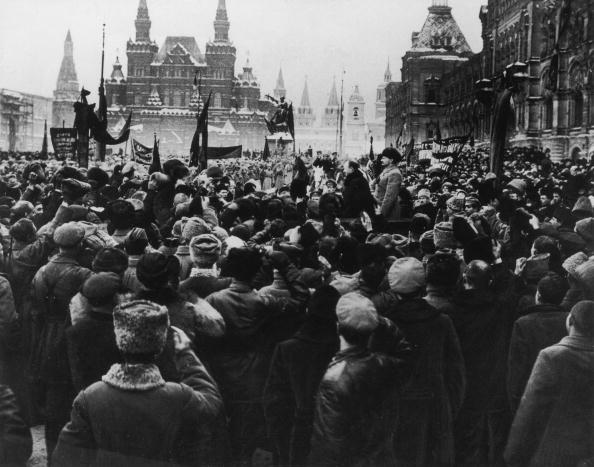 View of a large crowd assembled in Red Square, with Bolshevik leaders Joseph Stalin (right) and Leon Trotsky standing on a podium, during the Russian Revolution in Moscow, Russia. (Hulton Archive/Getty Images)
Books

A Russian revolutionary’s biography that reads like fiction
BY Dustin Bass TIMEJuly 17, 2022 PRINT

Christian Salmon’s new book “The Blumkin Project” has a very apt subtitle: “A Biographical Novel.” The book truly reads like a novel, yet it is contextually biographical. From the first line to the last line, it is a gripping read.

Salmon has a way with words and uses them so elegantly as to paint pictures throughout the book. The very beginning draws the reader in with his description of rummaging through an old chest of books and documents, all centered around his research of Yakov Blumkin, the 17-year-old Ukrainian Jew Bolshevik, who began his rise to Soviet stardom when he assassinated German ambassador Wilhelm von Mirbach on July 6, 1918.

Indeed, “The Blumkin Project” feels like an old book. It reads as if it was written sometime during the Cold War or even between the two great wars. The only moments that give away the modernity of the work are the author’s references to Google Maps or his current travels. But those references are minimal enough to allow the reader to fall back into the lore of an aged story.

The author explains, more or less, how he wrote the biography like a novel, a spy novel at that. His gift for creating the visual begins with creating his own visuals.

“Before I start writing a chapter, I’m in the habit of putting up photos of the main characters, maps of certain cities or neighborhoods where the action takes place, etc. on a blackboard that covers one of my office walls. Once the chapter is finished, I file these documents in an archive box. I then repeat the same operation for the next chapter, the way a detective does at the start of a new investigation.”

The process apparently works for the author, and results in a book that will work for readers.

The Crime as Starting Point

The author begins with the assassination, an international incident that took place during an international crisis: World War I. Later in the book, the author writes that Blumkin declared he was a man with nine lives.

This was his first life. After the assassination, the Bolsheviks informed the German government that Blumkin had been executed. Of course, he was not executed. Since he was “officially” dead, his ghost could be used to accomplish other missions.

The author, however, expresses that Blumkin must have felt even more dispensable than before he had been summarily “executed.”

“To Blumkin, everything he had experienced since the July 6 attack felt unreal,” Salmon wrote.

“‘My story will end in rubble,’ he suddenly thought. In the history books he would just be the man who assassinated the German ambassador. All the rest would be erased, overshadowed by his crime. At seventeen, he was already posthumous.”

A Life of Intrigue and Myth

The starting place of the book is the assassination, and the assassination never leaves the storyline. The crime is equivalent to Blumkin’s shadow. It is part of him; and those around him, as well as the author, can hardly view him through any other lens. It is the subject’s reference point to his own mythos.

Blumkin becomes a useful tool for the Bolsheviks and the revolutionaries, a revolution he truly believes in, as is made clear by the July 6 crime. He becomes a friend (if one can use such a term among revolutionaries) and ally of Leon Trotsky.

It is Trotsky who ensures that Blumkin is not executed, and the author points out that there was no real threat of execution. His friendship with Trotsky, however, would be his downfall during the early reign of Joseph Stalin.

But that downfall, which arrives in the fall of 1929, comes at the end of the book.

Salmon follows Blumkin’s transformation from a young revolutionary assassin to a matured revolutionary clandestine operative. Like a work of fiction, something out of a John Le Carré novel, Blumkin’s cover is that of a collector and reseller of rare books.

His specialty was rare Hebrew works. In a time when anti-Semitism was feverish in Russia, Blumkin knew his cover could also salvage books that would otherwise be destroyed. He was quickly successful.

Blumkin was assigned the task of creating a network in Palestine, Syria, Jordan, and Egypt. He played a vital role in counterespionage against the West. He roamed through Mongolia, Tibet, northern China, Palestine, Ulan Bator, New Delhi, Shanghai, Jaffa, Jerusalem, and Cairo.

His work was obviously dangerous as he was a target of the spy agencies of the West. But perhaps his most dangerous locale was at home, where the revolution had resulted in Vladimir Lenin’s rise to power, but was hardly settled. Adding to the danger, he moved among groups like the Cheka and the Left Socialist-Revolutionaries (SR).

Lenin and the Left SR were at odds with each other.  After the attempted assassination of Lenin by Fanny Kaplan, a Ukrainian Jew and member of the Left SR, the Left SR helped Blumkin get out of harm’s way. Kaplan was executed by the Cheka, the new Soviet secret police organ.

Blumkin’s association with the SR also nearly resulted in his murder when the Left SR thought he had betrayed them to the Cheka. He was shot multiple times, but was taken to the hospital. While recovering, members of the Left SR tossed a grenade through his hospital window, but he quickly picked it up and threw it back out.

An Honest Look at the Revolution

Salmon creates an almost sympathetic character. Blumkin was a teen, a 17-year-old at the time of the assassination, which means he had fallen for Bolshevism well before that moment. He eventually matured from impressionable to true believer—that is, until the belief that created the revolution began to crumble before his eyes. Interestingly, Blumkin’s life reflects that of the life of the Russian Revolution.

“The ‘glorious October Revolution’ became the object of three successive accounts,” Salmon writes. “First as a collective, anonymous epic of peasants and workers; then as a novelistic work of Bolshevik theoreticians and strategists; and finally, as proof of one man’s genius. Soviet historiography successively followed three literary genres: epic, novel, and hagiography.

But the transition from one to the other wasn’t easy. To accomplish it, faces and voices had to be erased. Entire lives were made to disappear, a colossal and difficult undertaking, because it’s easier to get rid of bodies than living memory.”

For this reason, Salmon goes on to add that Alexander Solzhenitsyn, the Russian novelist, was not a novelist. “He was an archivist, an archaeologist.” This is what Salmon is doing for Blumkin. He has unearthed an “erased” story about a pivotal figure during a pivotal time.

Salmon gives an honest approach to understanding the revolution, and the promises, the hopes, the violence, the devastation, the artists, the dissension, and the aftermath. There are chilling moments pulled from eyewitness accounts, perhaps from those who had been “erased” and are now being brought back into “living memory.”

As the author states in the book, a revolution requires the young. A revolution needs people like Blumkin, who will do whatever is required and will rise through the ranks, living merely on Party dogma and adrenaline. But as the old adage states, a revolution ultimately eats its own, just as it did with Blumkin, Trotsky, and so many others.

“The Blumkin Project” was not only a thrilling read, but it is also an insightful view of the Russian Revolution through the eyes of a Bolshevik operative. Salmon works to separate the truth from the myth, while presenting both. It is an honest tale that reads like fiction.