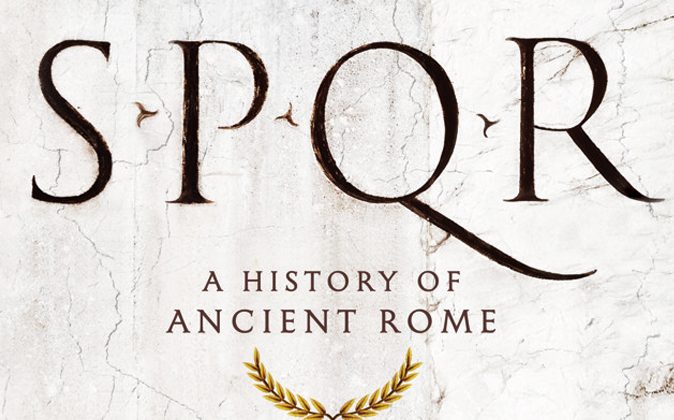 The story of Rome is as abundant and expansive as the entire region of Europe. It would take endless books, excursions, and personal research to get a taste of what life was like in the constantly changing landscape of the Roman Empire. The average reader would surely shy away from this ancient world if he or she had no reason to visit it. After all, how could a 2,000-year-old empire be relevant in the age of smartphones and computers?

To tell Rome’s story in a way that is timely and comprehensible, one would need a guide like classicist Mary Beard—wise and incredibly daring. She tackles the daunting task of telling Rome’s story in her new book “SPQR,” the title referring to the motto of the Roman Empire—Senatus Populusque Romanus.

The greatest strength of ‘SPQR’ is its subtle humor.

In spite of her deep fascination with ancient Rome, Beard is careful not to turn “SPQR” into a mere love story that sings this ancient empire’s praises.

She acts as a critic who shares Rome’s accomplishments as well as its shortcomings. For example, the “Cloaca Maxima,” or “Great Drain” is perhaps the most famous attempt at an early sewage system. Regardless of its renown, Beard mentions that many of the forced laborers were so tired from working that they killed themselves. These small but important details prove vital to our understanding of the Roman Empire as a whole.

The greatest strength of “SPQR” is its subtle humor. Rather than write a dry, fact-infused book that would surely be overlooked by the average reader, Beard has constructed a guide that is as witty as it is informative. On the comedies of Plautus and Terence, Beard writes, “The ‘happy ending’ to some of their rape stories can appall modern readers: ‘Good news—the rapist was her fiancé all along,’ to summarize the dénouement of one.”

She brings her skepticism of the grandeur of Rome into photographs and sketches that would otherwise appear straightforward. A drawing of Augustus’s Forum shows the effort that Augustus put into overshadowing the old forum, but the sketch proves to be “certainly unreliable in detail.” Similarly, the columns of Hadrian’s Panthenon were of Egyptian granite, which came from only one spot on earth—2,500 miles from Rome—and signified the extent of the Roman reach.

But for all of ancient Rome’s flaws, Beard does not want her audience to dismiss the once great civilization. Rather, her purpose is to bring the reader to a happy medium between admiration and skepticism. As she writes in the introduction: “There is much in the classical world—both Roman and Greek—to engage our interest and demand our attention. Our world would be immeasurably the poorer if we did not continue to interact with theirs.”

She wants us to question everything that we’ve ever been taught about Rome and its people. “Is it legitimate to eliminate ‘terrorists’ outside the due process of law? How far should civil rights be sacrificed in the interests of homeland security?” she wonders. These questions are just as relevant today as they were 2,000 years ago.

And when learning about ancient Rome, there is much to question. In those days, not all babies were lovingly raised; many girls were thrown into a trash pile directly after birth. Only half of the lucky babies survived to age 10. This meant that a woman had to give birth to about six babies in order to maintain Rome’s population.

“How did these patterns of birth and death affect the emotional life within the family?” Beard asks. She looks to evidence such as the epitaph on a tombstone for her answer: “My little doll, my dear Mania, lies buried here. For just a few years was I able to give my love to her.”

In the story of Spartacus, he and his 50 slave gladiators, wielding kitchen tools as weapons, spent two years successfully fighting off Roman armies. A tale like this is treated as legend, and as such, not many people ponder the plausibility of this underdog story. Beard, however, thinks a bit deeper. “What explains that success?” she wonders.

Perhaps a book at 544 pages is too overwhelming a read for the amateur classical reader. As a scholarly book, however, half of the fun is forging your own path and asking your own questions. The book does not have to be taken as strictly chronological. Are you interested in pirates? “SPQR” has its share of pirate tales. Would you like to learn about the bar culture of ancient Rome and what sorts of games were played?

It would be a disservice to Beard not to fall in love with Roman civilization on your own time and in your own way—even if that means jumping from page 334 to page 505. For to read “SPQR” is to have your own adventure, to ask your own questions, and to be touched by whichever aspects of ancient Rome speak to you.