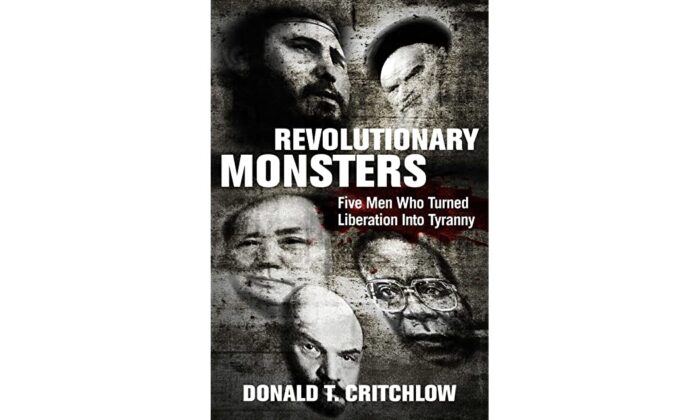 Historian Donald T. Critchlow's book is targeted for students, but it's a must-read for all.
Literature

Donald T. Critchlow has written an important book in a time when it seems to be most needed. The Katzin Family Professor at Arizona State University (ASU) has constructed a very readable and relatively short book on the danger of tyranny arising under the promise of liberty.

The 177 pages of “Revolutionary Monsters,” which excludes the index, is notably short considering that Critchlow covers the rise of five national leaders who, over the past century, repressively dominated their countries through lies, intimidation, corruption, and extreme violence.

The lives of Vladimir Lenin, Mao Zedong, Fidel Castro, Robert Mugabe, and Sayyid Ruhollah Khomeini make up five of the seven chapters in the book. Critchlow does not get bogged down with extreme details, but he does provide enough in covering the individual’s life before and during his role as dictator, to connect the similarities among the five. In a sense, Critchlow utilizes the 30,000-foot view with each and swoops down only when necessary to provide a closer perspective.

This is not the book for those wishing to read a biography of any of these historical villains. It is an introduction to these persons, as the author makes clear from the outset. He calls his book “a warning to those beguiled by a siren call of revolution,” and it was written for those “who know little about the human tragedy of history.”

Critchlow seems to be referring to those with whom he has so much interaction: college students. Youth often seem to be the most beguiled, perhaps since they are the most targeted. As true as this may be, “Revolutionary Monsters” is an important read for those who have surpassed the age of youth, yet still “know little about the human tragedy of history.”

The Playbook for Tyrants

There are a number of key points Critchlow makes about these rulers’ rise to power.

From the People: For dictators to rise from within the people, they must at least give the perception that they are one of the people. These eventual dictators based their rhetoric on being in solidarity with the people’s struggle and often represented themselves as part of the peasantry. Each enabled and encouraged the lies about their upbringing to be perpetuated to the population.

Revolutionary Hotbeds: Critchlow notes that the seeds of revolution were planted in certain hotbeds, and those typically involved academia. The universities of these eventual revolutionary leaders were either within their country or without. Either way, these men were influenced by teachers, fellow students, and/or the institution’s curriculum. It would be antithetical for Critchlow to condemn academia as a whole, but he proves that he is not so partial to his industry as to ignore a common origin of revolutionary thought.

Support of the West: Whether through naiveté or the desire to view revolution without the cost of personally enduring it, journalists, activists, and politicians in the West supported revolutionaries, some more so than others. Critchlow points out that journalists would often ignore and omit statements that read too harshly, or they simply believed the revolutionary did not mean what he said.

False Promises: Each of the rulers rose to power by condemning the current regime or form of government. Without question, those regimes and forms of government were worthy of condemnation, whether for reasons of corruption, authoritarianism, or a desire to be independent (as in the case of Rhodesia). Critchlow indicates that each of these revolutions began atop a powder keg of resentment and disdain for the current ruling class. Each dictator simply had to promise a better situation than the current one: more freedom, a better economy, and social justice. Each dictator would fail on those promises, and it is rather difficult to conclude that they failed accidentally.

Critchlow gives readers a look at the formula for past revolutions. Yet without his directly saying so, it is unmistakable that he is hinting at America’s current climate.

A Clever Selection of Tyrants

Critchlow did not choose the big three: Stalin, Hitler, and Mao. He did not stay within a certain ideology like fascism or communism. Furthermore, the author pulls his monsters from Russia, China, the Americas, the African continent, and the Middle East, exemplifying that tyranny knows no geographical or racial bounds.

The two figures that stand out are Mugabe and Khomeini. Enough has not been made of these two on the grand stage of tyrannical rule. Although there are plenty of dictators to go around, choosing one that based his rise on religion and as his being the voice of God and another on his fighting for independence and ending colonialism were wise choices.

The author also identifies what all five had in common, which is perhaps the most necessary tool in the revolutionary-turned-tyrant playbook: the cult of personality. Each was able to convince large portions of the population to follow his lead wherever it went, even the path to violence and destruction.

Critchlow has written an easily digestible and necessary book that I would recommend to parents for their high school and college students before they return to class after the upcoming winter break. I would further recommend it for homeschoolers or even for private schools, especially within the realm of geopolitics.

The ASU history professor ends his book with several recommendations for readers to continue their study of 19th- through 21st-century tyrants and revolutionaries. In many ways, I view this book as planting its own seed, not for fomenting revolution but for cultivating a healthy skepticism of anyone making lofty promises to the masses.