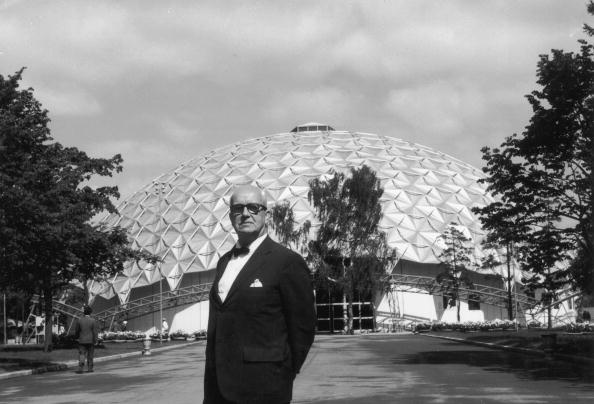 Book Review: ‘Inventor of the Future: The Visionary Life of Buckminster Fuller’

An honest look at the futurist architect whose impact may or may not be overstated
BY Dustin Bass TIMEJanuary 22, 2023 PRINT

Buckminster Fuller was a brilliant man; there seems to be no doubt about it. In Alec Nevala-Lee’s new biography of the inventor/architect/designer, Fuller is presented as a man who was known by many in the highest circles nationally and internationally as one of the 20th century’s most brilliant people. But the book calls into question how much of his brilliance was real and how much of it was showmanship.

“Inventor of the Future: The Visionary Life of Buckminster Fuller” is a full expository of the reality and the myths that surrounded him (those created by others, but mostly those created by himself). Nevala-Lee’s work is a profoundly honest take on whom he calls the discoverer of the geodesic dome and the namesake of the buckyball (for the 1985 discovery of soccer ball-shaped carbon molecules). It seems there is nothing the author missed in his study of his subject.

The author’s candid presentation allows the reader to view Fuller in much the same way his contemporaries did. There were those who practically worshiped Fuller for his genius (regardless of his often fallibility). There were those who simply wished to be in his company due to his rising star in political, scientific, and elitist circles. There were those who despised him for his dishonesty, ruthless endeavoring, and his taking credit for others’ discoveries or designs. And then there were those who viewed him as a charlatan—a man who over-promised and under-delivered.

Nevala-Lee presents the man with all his flaws, all his promise, and all his success. We are taken from birth to death, experiencing tragedy and comedy along the way. The author has intricately detailed Fuller’s life by intimately surveying it; but in no way does it come across that the author is emotionally attached to his subject. His efforts to dispel the Fuller myths and lore are too prominent to suggest that. Truly the reader and posterity is better off for it. Indeed, biographies should be used to dispel myths rather than perpetuate them.

The Title As Descriptor

The title of the book is a true indication of where Fuller left off. He was the inventor of the future. Though his designs have inspired the Astrodome and the Epocot Center’s Spaceship Earth, his predictions that geodesic designs would be indispensable for the world’s future (such as housing and sustainability efforts) left the world wondering how far into the future must it go before his predictions or visions are met. This question that one is left with echoes the suggestion that Fuller did live, at least partially, a “visionary” life.

For this reason, many who worked with him, listened to his hours-long lectures, or merely encountered him walked away with either undaunted hope for the future or a cynical belief that they were being sold a bill of goods.

Nevala-Lee presents a man who left his imprint on the modern world. At the same time, however, the presentation leads to the question, precisely how large was that imprint? The imprint seems to be much smaller than what Fuller hoped (or believed) it would be. But the future is still unfolding, and the next decade or so may prove Fuller to be not just ahead of his time, but ahead of now.

Possessed by the Future

Fuller was a tireless thinker who constantly networked in order to get his thoughts under construction. He was a celebrity architect who used his celebrity status to achieve his aims. He was not unscrupulous in this manner, but he had no issue working with unscrupulous people. For all his wishes to better humanity, Nevala-Lee shows a man who could turn a blind eye if it meant his work could be financed or promoted.

Despite Nevala-Lee constantly correcting myths and outright lies told by Fuller, one of the author’s aims may have been to show just how honest Fuller was with himself. For Fuller, the end goal was always the work―the next design, the next project, the next client, the next whatever it may be. He never shied away from that, even at his own expense.

Fuller is shown as a man possessed by his own ideas―ideas that were always about the future, as long as they had not been done before. This explains why his lectures were so long and why his books were almost unpublishable due to length and incongruence. He had so much to share, and, as is revealed in the book, he believed his time was always sprinting to an end.

Getting the ideas out, however, often meant doing so without assessing them, which led to post hoc corrections to his equations, writings, and working relationships. The author mastered the mindset of Fuller. It was always moving forward at lightning speed, and whatever failed in the present could be made to succeed in the future (or discarded). In many ways, this is a major part of the legacy that Fuller left the political, scientific, and elitist worlds―always looking forward to the future, and as long as they hope for the best and believe their intentions are pure, their recklessness can be forgiven, if not condoned.

“Inventor of the Future” is a wonderful biography about a man who was relentless with his ideas. It is part inspiration, part disenchantment. This biography examines the clash between the promise of the future and the reality of the present met in a single person: Buckminster Fuller.

A biography on a complicated inventor, by Alec Nevala-Lee.