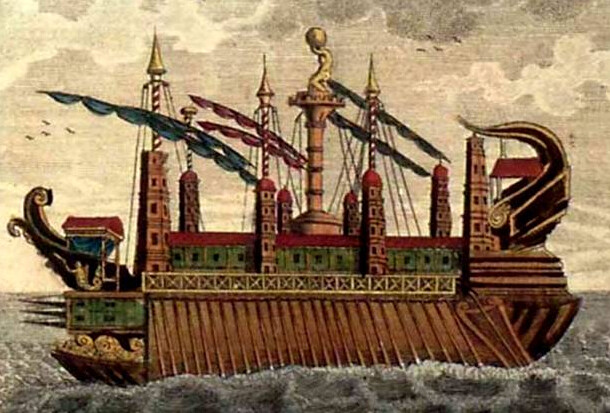 An exaggerated depiction of the Syracusia, a large cargo and passenger transport ship of Ancient Greece and one of the largest of antiquity. An engraving from Robert von Spalart's “Historical Picture of the Costumes of the Principal People of Antiquity and of the Middle Ages,” Metz, 1810. (Public Domain)
Books

Book Review: ‘How to Innovate: An Ancient Guide to Creative Thinking’

Learning how to innovate from the first to do it
BY Dustin Bass TIMEJuly 26, 2022 PRINT

What is the origin of things? Did things come from nothing or from something? Those were just some of the many questions the Ancient Greeks pondered, but it led them to be the first to truly innovate. They saw what was and made them better.

Armand D’Angour, professor of classics and a fellow at Jesus College at the University of Oxford, has translated portions of several Ancient Greek works, along with adding his introductions to certain ideas, as part of Princeton University Press’s collection of Ancient Wisdom for Modern Readers.

D’Angour starts his book off with a quote from Dimocrotus: “Thinking new thoughts every day.” Truly, the Ancient Greeks knew how to think, and the author of this short translation of selected works makes that very clear to the reader.

For any innovator, it is always prudent to give credit to whom credit is due, and the Greeks deserve much of the credit for pushing civilization to be more thoughtful and more innovative.

The author points out that the Ancient Greeks invented the alphabet. They  borrowed and adapted letterforms used by the Phoenicians, and the Greek alphabet, in turn was  adapted by the Romans. From there, the Roman language spread as the Romans did.

He adds that the Greeks invented “philosophy, logic, rhetoric, and mathematical proof”; they were the “first practitioners of theatrical drama, rational medicine, monetary coinage, and lifelike sculpture”; and they created “competitive athletics, architectural canons, the self-governing city-state, and democratic politics.”

There is so much to learn about what the Greeks learned. D’Angour relates just a few instances that will be of great interest to readers, especially about war and politics.

The Source of Innovation

As aforementioned, the book begins with the Ancient Greeks discussing the source of change. How do things come to be and how do they become better? Their desire to know the origin of change and their belief that something always comes from something was the engine of their innovative spirit.

The author provides a number of examples of Greek innovation, like Archimedes’s “Eureka!” moment in his bathtub regarding the king’s crown, the massive “Syracusia” ship, Aristotle’s analysis of Plato’s politics, as well as the Battle of Leuctra.

The Source of Each Story

The author provides the source of each story of innovation with an introduction. Instead of conducting a complete translation of the work, like Plato’s “Republic” or Aristotle’s “Politics,” which would be large works on their own, he provides a brief overview of the ideas within the following chapter.

This gives the reader a good grasp of what is in store in the chapter, along with what the particular Greek was thinking when writing his work. The translation, which has the original Greek on one side, presents the nuggets of the work to the reader.

The innovative mind is the central theme. We start with the brilliant mind of Archimedes when he is presented with a task to find out if the king’s crown is made of pure gold or not, without chipping it or melting it down. His “Eureka” moment comes in his bathtub, which iterates the author’s point that “certain conditions can help to stimulate the spark of innovative thought.”

The author discusses how this moment in the tub caused Archimedes to consider the object’s density through water displacement. This idea of density and floatation leads right into the building of the massive ship “Syracusia,” which Archimedes proved could float despite its size and well before it hit the water.

Plato was Aristotle’s teacher, but the student had little issue with dismantling some of Plato’s, or Socrates’s ideas on politics and government. The author shows that it doesn’t always take a mathematical genius (though these philosophers were) to be innovative.

In the realm of politics, it merely comes down to asking the right questions. Aristotle breaks down politics in the same way he breaks down the categories of state, family, and individual. This path to understanding politics made it easier to understand the role of government and make it better.

D’Angour also translates Aristotle’s thoughts on laws and why people break them. This line of thought allowed him to discuss openly why some laws are bad, some good, and some unnecessary.

This led Aristotle to write that “written laws should not be considered unalterable.” This statement allowed for open discussion into changing laws that proved unnecessary or unhelpful. By enabling open discussion, laws and governments were able to undergo beneficial innovations.

In this final section of the book, the author also extends the thoughts and actions of the Ancient Greeks to their disdain for abuse with innovation, or simply put, innovation for innovation’s sake. This abuse is centered around law and government.

Aristotle finalizes the book with a powerful line: “the law has now power to secure obedience other than the power of habit, which needs time to take effect, so that readiness to change from old to new laws weakens the power of the law.”

Though most of this section is centered on law and government, the abuse of innovation extends to everything. This last line from the book clarifies that innovating for the sake of innovating can actually diminish, if not destroy, the very thing from which it originated.

These works from Princeton University Press’s “Ancient Wisdom for Modern Readers” are necessary for a society that seems to have abandoned its origins.

In particular, this book on innovation will create a new appreciation for the Ancient Greeks and all those who came before us. It can also act as a source of inspiration to either go innovate or ponder what might need innovating.