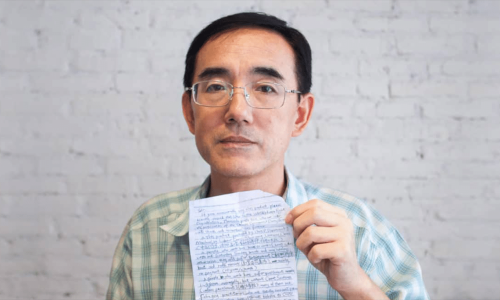 Falun Gong practitioner Sun Yi began writing SOS letters about the desperate situation in the prison camp and hiding them inside the packaging of goods for export that he was made to work on. (Falun Dafa.org)
Books

Book Review: ‘Five Letters From Prison That Have Changed the World’

Letters that have transformed the world have come from the very best persons and some of the very worst. Both categories are represented in “Five Letters From Prison That Have Changed The World” by Rodney Walker, a U.S. history teacher.

Walker became interested in how letters from prison have changed the world because some were written with an eloquence reminiscent of soliloquies. A soliloquy usually denotes a profound solo utterance of an actor in a drama. Walker says that “prison, though punitive by design, can be an unexpected birthplace of self-reflection, self-discovery, illumination, and even transformation for a man’s unsettled soul.”

Martin Luther King Jr. was an African American Baptist minister and the most prominent leader of the civil rights movement during the 1960s. He was arrested and jailed during anti-segregation protests in Birmingham, Alabama.

During his detention, he wrote the famous “Letter From Birmingham Jail,” declaring the moral duty of individuals to disobey unjust laws. The letter was his response to a public statement of concern and caution issued by eight Southern white religious leaders, and it’s regarded as a landmark document of the civil rights movement.

Four months following King’s incarceration in the Birmingham jail, he helped launch the March on Washington, which became one of the largest civil rights events in the history of the movement. President John F. Kennedy reluctantly endorsed the march, although he feared the event would increase racial tensions. It did not.

The march proved to be an extraordinary success in pressuring Kennedy’s administration to initiate a strong federal civil rights bill in Congress.

Paul was born a Jew and a Roman citizen. Though initially he had been known to persecute Christians, after his conversion to Christianity, he became the “Apostle to the Gentiles” (non-Jews).

Paul was taken to prison for protection from religious Jews who sought to take his life. In prison, he felt an urgent need to warn others against false teachers and to instruct them in the basics of godly living. Paul felt it was his job to keep heresy out of an early church that was vulnerable to secular belief systems that were spreading.

Though the Roman government desperately attempted to put an end to the spread of Christianity, it could not. Wherever persecution of Christians increased, the religion appeared to spread even faster. The personal letters of Paul encouraged Christians to remain faithful while suffering persecution, and helped to establish the early Christian church.

Nelson Mandela was a South African revolutionary, political leader, and philanthropist. When apartheid—a system of racial segregation and economic discrimination—was established, he committed himself to its overthrow.

Mandela was imprisoned in 1962 and subsequently sentenced to life in prison for conspiring to overthrow the state. In prison, Mandela smuggled out statements and letters to fuel the continuing anti-apartheid movement. As the years passed, international pressure for Mandela’s release mounted. He was told that he could go free if he renounced violence as a tool. Mandela chose to stay in jail because he wanted the government to declare a commitment to end apartheid.

On Feb. 11, 1990, Mandela was released unconditionally from prison after 27 years. Following his release, he supported the negotiations that would bring an end to the apartheid system. Mandela became the first post-apartheid president of South Africa.

A leader in the Indian campaign for home rule, Mohandas Gandhi worked all his life to spread his own brand of passive resistance across India. Gandhi fought for freedom in India. But he didn’t fight with weapons; he believed that words and actions were more powerful than violence. People called him “Mahatma,” which means “Great Soul.”

Walker talks about when Gandhi was in prison opposing the new Indian constitution, which gave the country’s lowest classes their own separate political representation for a period of 70 years. A member of the merchant caste, Gandhi nonetheless advocated for the emancipation of the untouchables, whom he called “harijans,” or “children of God.” Gandhi believed that this constitution would permanently and unfairly divide India’s social classes.

Walker highlights this fact in his book by including a letter that Gandhi wrote saying that he would fast until he died from starvation if a separate electorate was established.

Turning to the present, Walker includes the powerful story of Sun Yi. In February 2008, just before the Beijing Olympics, Sun was caught and arrested by Chinese Communist Party (CCP) authorities during a raid. His so-called crime was that he believed in a spiritual discipline called Falun Gong.

Falun Gong, also called Falun Dafa, is based on the universal principles of truthfulness, compassion, and forbearance and teaches five meditative exercises. The practice quickly spread by word of mouth, reaching up to 100 million practitioners by 1999. Seeing this popularity, the Chinese regime suddenly labeled it as a threat and began arresting, torturing, and killing practitioners.

Sun was sentenced to 2 1/2 years in a Chinese labor camp, where he was subjected to extreme torture and psychological pressure to recant his faith.

At the labor camp, Sun was tasked with assembling Halloween decorations to be exported and sold through U.S. department stores. Under the terrible conditions of the camp’s slave labor, an idea occurred to him. He wrote a letter with the letters “SOS” in English and hid it inside a product box he’d assembled to tell the world about the abuses taking place in prison.

His heartbreaking letter described his torture and how Falun Gong prisoners at the camp suffered more punishment than others.

The scrap of paper traveled thousands of miles and was purchased by Julie Keith in Damascus, Oregon, near Portland. The box of decorations containing the letter languished in her home for two years before her 4-year-old daughter asked for a Halloween-themed birthday party. When Keith remembered the Halloween kit and retrieved it for her daughter, she found the note.

Keith took a photo of the note and contacted human rights organizations. After receiving little response from them, she did an interview at a local newspaper where the story would eventually run on the front page. Later, there was also online exposure by a Chinese magazine that published an exposé about conditions inside Chinese prisons.

In 2010, Sun was released from the labor camp and traveled to Indonesia where he would meet Keith face-to-face and exchange gifts. After Keith’s visit, however, Sun was contacted by a suspected Chinese agent; two months later, he died of a suspicious case of acute kidney failure. Despite a request from his ex-wife and sisters, there was no investigation into the cause of death. Sun had lived an exemplary life and died after heroically telling the truth.

A 2018 documentary about Sun’s story, called “Letter From Masanjia,” is available for free online.

Unfortunately, the CCP regime’s persecution of Falun Gong continues to this day.

Of course, not all letters have been for mankind’s good and not everything written in prison has been in the form of letters. Although Walker says nothing positive about Adolf Hitler, the Nazi leader is included in the book because of the influence of “Mein Kampf,” which he began writing while in prison.

Hitler and the Nazi party had led a coalition in an attempt to overthrow the German government. This insurrection failed miserably, and he was arrested. During the trial that followed, Hitler’s popularity increased as his passionate defense speeches were printed in the newspapers. Hitler was convicted and sentenced to prison, but he was released after only nine months. During his incarceration, he dictated the first volume of “Mein Kampf.”

In his book, Walker reprints some passages from “Mein Kampf,” which was used as racist propaganda against the Jews. Hitler stressed that racial purity was an absolute necessity for a revitalized Germany.

Reading the portion of “Mein Kampf” in the book is excruciatingly painful. Hatred and anger jump out at the reader. People followed Hitler, and his words certainly changed the world: They were used to justify the slaughter of 6 million Jews.

To quote George Santayana, “Those who cannot remember the past are condemned to repeat it.”