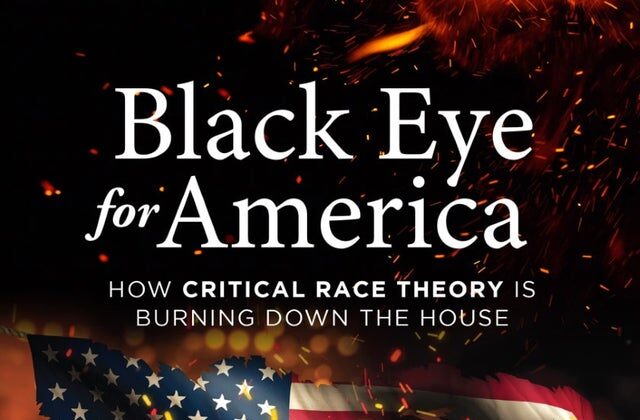 "Black Eye for America: How Critical Race Theory Is Burning Down the House" examines how critical race theory is hurting black and white while promoting communist thinking.
Literature

At a time when Americans are hearing the term “critical race theory” tossed about, it behooves us to know exactly what it means. The excellent book “Black Eye for America: How Critical Race Theory Is Burning Down the House,” provides needed clarification.

In CRT, society is understood in terms of the domination of oppressed groups by oppressor groups. It departs from traditional (or “economic”) Marxism by substituting social (especially racial) groups for economic groups.

CRT proponents say that American culture is a conspiracy to perpetuate white supremacy by imposing white concepts on people of other races. They argue that government-sponsored racism never ended, despite the fact that in the 1960s Congress passed three major civil rights bills to address the effects of Jim Crow racism.

The Ideas of CRT

The authors quoted a recent publication by the Smithsonian National Museum of African American History and Culture to explain CRT. CRT holds that a capitalist society sustains itself, in part, by imparting a “false consciousness” on workers to legitimize the social hierarchy and to reduce the likelihood of revolutionary action.

The supposed harmful aspects of “whiteness” include individualism, self-reliance, two-parent homes, rational thinking, and a belief that hard work pays off. Members of minority groups must reject these white concepts even if these habits and activities promote community cohesion and individual well-being.

As a consequence, CRT in schools teaches self-hate to white children and demeans children of color by denying them ownership of and control over their own lives.

Racism is no longer defined as hating, demeaning, or devaluing others based on their race. Instead, all whites who do not support the ideas of CRT are considered racist by virtue of having “white” values.

The book’s section on lawsuits is too short, I believe, but absolutely necessary for readers to fully understand how CRT undermines traditional values. Here are examples of actions that the authors mention, which precipitated lawsuits. In one case, white employees were instructed to “step back and yield to colleagues of color” as well as to view their own culture as “inherently supremacist.”

In Illinois, seventh- and eighth-grade students were told to remain silent and to lower their eyes—a gesture of submission—while being addressed by their CRT instructor.

In New York City, white employees were told by instructors that their racial identity is “toxicity in the air.”

In Nevada, a 12th grader was required to announce and degrade aspects of his identity, including his Christian faith.

The authors include an extensive glossary. I believe they feature such a large one because it makes it easy for readers to truly appreciate just how un-American CRT is and how destructive it is to all people. This section will make readers question why this propaganda continues to grow.

The book’s action plan includes suggestions for how to combat CRT in the reader’s personal life and helps to construct a culture where others can do the same.

The authors list proposals as subtitles and then explain them in greater detail. In the appendix, a list of resources tells readers where to find allies in this fight.

The authors’ proposals include these actions:

The authors suggest finding alternatives to CRT that embrace the American motto “E Pluribus Unum–Out of Many, One.” This idea recognizes and appreciates the individuality each person brings to, and thereby enrichens, the country.