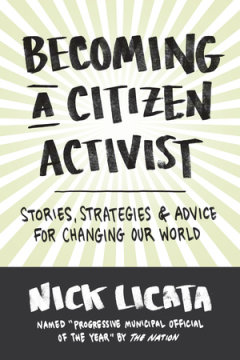 So many people want to change the world, but so few people know how. In his new book  “Becoming a Citizen Activist,” Seattle City Council member Nick Licata sets out to help the common man fight powerful entities like City Hall. Licata’s book is filled with applicable advice, and interesting stories of those who desired to change public policy for the better.

“Becoming a Citizen Activist” is a manual for the budding activist who wants to get his or her cause off the ground. It explains which methods of activism work well, which don’t, and why.

The book is broken into 11 chapters that each deal with a certain area of political activism—from social media and protests to the importance of listening and learning what others have to say about an issue.

Licata writes that one of the best ways to become an activist is to become an active listener. Take time to listen to your opposition; many times, the “opponents” are actually on your side. Learn what their goals are. Then you can team up to fight the real enemy.

At a time of great anger and fear in our society, it reminds readers that one cannot base a revolution on anger alone. There needs to be substance behind that anger in order to create change.

The entire book seems to be centered on the importance of organization to supplement passion, and to take a step back and figure out how to use our intense emotions in ways that are constructive, not destructive.

Being informed is one of the most effective ways to strengthen your cause. Aside from listening to the other side, you can listen to fellow citizens and learn what matters to them. Petitions, polls, and public forums are three ways to get the people interested in your cause, according to Licata. They allow the activist to see who cares most about the issue at hand. Once the activist learns who is on board, he or she can harvest that energy into supporting the cause.

With enough public support, it is then possible for those who have influence to lend a more powerful hand. Licata asserts that, although it may come as a surprise, politicians really do want to do what is best for people. But because politics is such a tricky game, it is usually either too difficult or too risky to side with the people.

Yet getting a politician’s support is the most critical step in getting a movement off the ground. Of course, because it is also the most difficult, there are certain ways to do it that will increase the chance of success. Licata emphasizes that politicians don’t like to be lectured to. Rather, it is better to treat change as collaboration between citizen and elected official.

With plenty of real-life examples, analyses on other movements, and personal stories from Licata’s time on the Seattle City Council, “Becoming a Citizen Activist” is a thorough book that provides an excellent crash course in political activism.