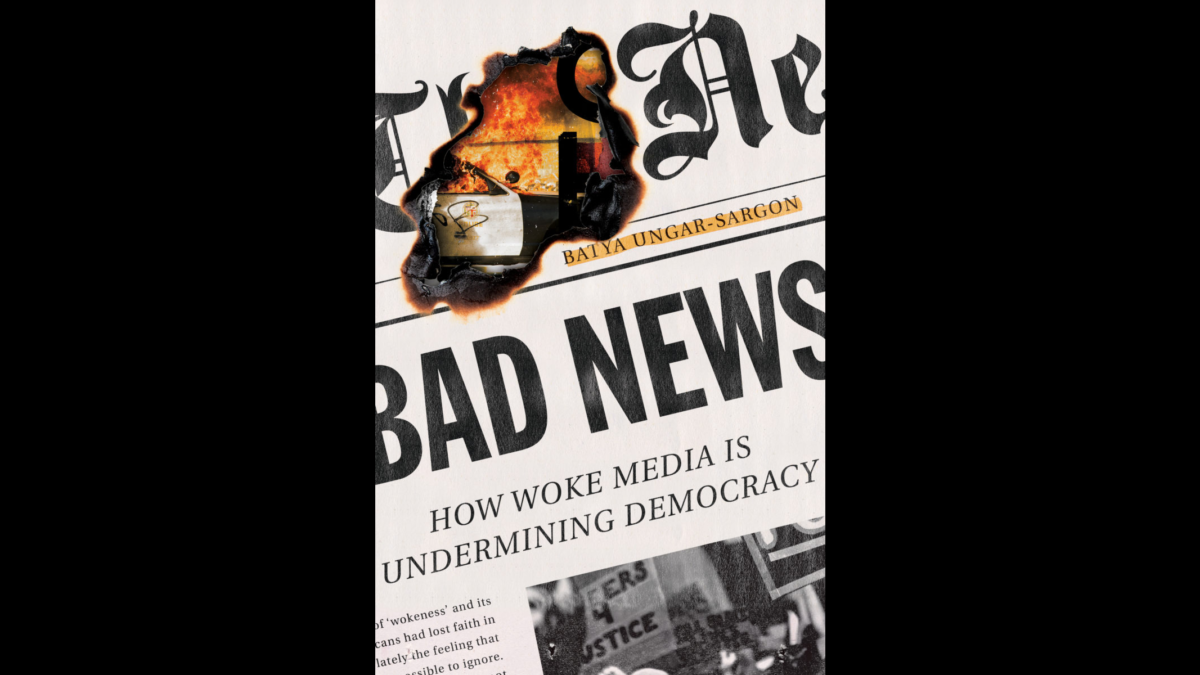 A breakdown on the breakdown of journalism
BY Dustin Bass TIMEMarch 28, 2022 PRINT

As the years have progressed in the 21st century, fewer and fewer Americans trust the media. According to the latest Gallup poll on the subject, only 36 percent of Americans do. There is plenty of reason for that, but the question is how did the media, or journalism, plummet to its current position. Batya Ungar-Sargon, the deputy opinion editor at Newsweek, has written a new book titled “Bad News: How Woke Media Is Undermining Democracy” that discusses the very reasons.

The author begins by introducing the reader to the early American forms of journalism with focuses on Benjamin Day and Joseph Pulitzer (Pulitzer, in particular), and the newspapers created specifically for the working class. The goal of these “penny papers” was to keep the masses informed, as subscribing to publications like The New York Times was too expensive. Sargon expresses in the book how media outlets, for the longest time, were used to keep the powerful in check. The prime era was during the Progressive Era (from the 1890s to World War I), when journalists were often called “muckrakers.”

The Path of Good Intentions

The well-known adage that “the road to hell is paved with good intentions” proves fitting for the journalism industry. Sargon references Walter Lippman, the influential journalist, author, and theorist, and his theory of the ideal journalist. She discusses how the eventual practice of that theory transformed a working-class industry into an elitist industry and one completely disconnected from those they are supposed to represent.

According to the book, “[Walter] Lippman wanted a fleet of highly educated men to be responsible for news gathering, men on whom large amounts of money and effort would be expended to train them in the ‘peculiar honor’ of being journalists. ‘Do our schools of journalism, the few we have, make this kind of training their object, or are they trade-schools designed to fit men for higher salaries in the existing structure?’ Lippman asked, wondering whether it might be a good idea to make a diploma from a journalism school ‘a necessary condition for the practice of reporting.’”

Journalists are now required to hold a degree to break into the industry, and if one wants to be considered for a position at outlets like The New York Times, The Washington Post, and TIME magazine, a degree from a prestigious university like, say, Columbia is a must. Lippman’s path of education to create experts has inadvertently, although rather inevitably, resulted in the creation of elites.

Sargon goes so far as to suggest that the journalists of today—those working within the largest and most powerful outlets—actually hold the average citizen in disdain. From the author’s point of view, the elitism doesn’t start when writers enter through the doors of The Washington Post or The New Yorker, but rather when they enter the classrooms of prestigious universities.

The book further breaks down how students, eager to make it into the field of that “peculiar honor,” are taught to hold traditional values, those held by a majority of Americans, in contempt. The results, as aforementioned, can hardly be viewed as anything other than inevitable.

How Journalists Have Turned to Race-Baiting

One of the cruxes of Sargon’s book is how liberals in the media have turned to utilizing race, class, and gender as constant talking points. She notes that one can hardly read an article in a major newspaper or magazine without encountering some form of claim of “oppression.” According to the author, the media has become obsessed with race and continues to use it to drive a wedge between groups of people. As she writes in her book, “Is it any wonder so many Americans hate the media?”

One group that does not hate the media, Sargon suggests in the book, is white Democrats. In fact, Sargon makes the case that outlets like The New York Times write specifically for this group. One statistic, of which the author provides many, stands out: The readership of The New York Times is 92 percent Democrat. She references this outlet quite often, primarily because it started out as a publication for the wealthy and has been, for a very long time, the nation’s paper of record. But this targeted readership is not just white Democrats but also wealthy ones.

Sargon writes: “The abandonment of objectivity in favor of a woke moral panic isn’t really about representing black people but about pandering to white readers. It is they who are clicking on stories calling for defunding the police―a view rejected by 81 percent of black respondents to a Gallup poll. It is they who answer the clarion call of open borders. It is white liberals for whom hundreds and hundreds of articles about white supremacy and slavery are written.”

For this reason, Sargon writes that Donald Trump, despite his crassness or perhaps because of it, connected with the average American. Americans in general, especially the working class, have become just as deaf to the elites in New York’s and Washington’s media outlets as those elites have become to the average citizen.

For this very reason, Sargon is hopeful that the current with which journalism has been flowing will soon shift in the direction that journalists like Pulitzer and Day had been working.

One could easily call this book a surmise on the demise of journalism. To many Americans, perhaps 64 percent of them, journalism is dead. Whether that statement is true or not, Sargon’s study of the industry’s century-plus decline will provide an in-depth view on how the noble profession arrived at its current sad state.