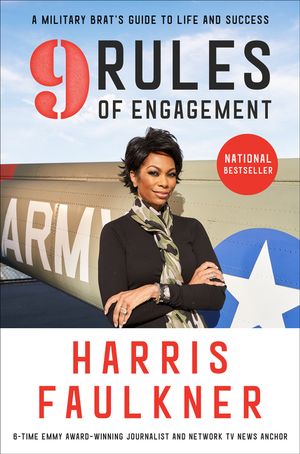 Book Review: ‘9 Rules of Engagement: A Military Brat’s Guide to Life and Success’

Fox anchorwoman Harris Faulkner’s new book, “9 Rules of Engagement: A Military Brat’s Guide to Life and Success,” reveals how her father achieved the American Dream—and not just the dream of providing well for his family, but the dream as the term was originally coined. In his 1931 book “The Epic of America,” James Truslow Adams described it as a society in which “each man and each woman shall be able to attain to the fullest stature of which they are innately capable, and be recognized by others for what they are, regardless of the fortuitous circumstances of birth or position.”

Her father grew up poor and with severely underdeveloped vocal cords, a condition that left him unable to speak until age 13. He worked hard to learn to speak well. Later, he volunteered to fight in Vietnam, seeing the military as real freedom from racism. He ultimately worked at the Pentagon for the Joint Chiefs of Staff.

Faulkner explores nine life lessons, each rooted in her early life growing up under the wings, so to speak, of the military. She has been able to apply these lessons in her own civilian life to achieve success.

As a well-respected, very functional organization where people of different backgrounds live and work together for the greater good, the military inspired Faulkner. She believes stories and lessons from the military can offer life lessons to inspire others.

Each chapter of Faulkner’s book covers one life lesson:

No. 1 Recruit Your Special Forces

Faulkner’s father would tell his battalions that people’s lives have limited space and energy, so you should be sure to surround yourself with those who can get things done when they need to be done. A poignant example illustrates this principle. When she was young, Faulkner’s home was bombed, due, she believes, to desegregation. Her uncles—her special forces—swooped in to help move the family.

No. 2 Deal With Your Demons

This chapter covers Faulkner’s own bad habits, such as being late or interrupting her guests when interviewing them on her show. But she also examines the problems that the military is dealing with or will deal with: the health needs of future veterans and sexual harassment currently within the forces. She gives ideas about how to deal with these demons as well.

Military troops never know when the call will come for them. Faulkner advocates being physically agile, mentally alert, and emotionally prepared for any eventuality.

No. 4 Devise Your Mission

It’s important to devise a complete mission plan to succeed toward a goal—a thought-out game plan that would include any training needed and a contingency plan. This strategy is a way of focusing your efforts and giving your plan a fighting chance.

Observe your environment to see how others thrive in it. Wear the right clothes for the occasion or begin dressing to captivate the attention of higher-ups. See if there is other equipment that will help you succeed.

No. 6 Unleash the Power of Integrity

People with integrity expect excellence from themselves and others. No matter what is happening around you, Faulkner wants to see this quality maintained.

Once General Jack Keane told Faulkner about how when he was a leader in Vietnam, a mistake was made while ambushing the enemy. Keane took responsibility for the mistake and then simulated the situation over and over while in the middle of a combat zone. Through his perseverance, he was able to achieve considerable improvement. Faulkner encourages you to set a good example for others to follow.

No. 8 Own Your Moment

When it is time to shine, do so. Share your knowledge about your work or special hobby with others to inspire them to achieve also. Faulkner believes that gratitude for opportunities are shown best by passing them on.

Representative Martha McSally, a retired military officer, told Faulkner that when McSally served in the military in 1995, all females had to wear the abaya (a head-to-toe gown) with matching head scarfs if they went into Saudi Arabia. A female also could not drive and needed to be escorted by a male officer, who, if stopped, would claim her as a wife. McSally believed that this was against American values that she had sworn to protect.

It took six and a half years, but McSally was able to get the rules changed. She owned the moment the day she watched on C-SPAN that the legislature, which had passed unanimously, was signed into law.  About a year later, McSally was deployed again to Saudi Arabia, and she was able to own the moment once more when she was given a copy of this law to sign.

No. 9 When Things Fall Apart, Believe You Have the Answer

Faulkner says that if a situation seems insurmountable at the moment, trust that there are many ways to look for and find solutions.

When Faulkner applied for college, she did not apply as a minority candidate. She was turned down by her college of choice, but then her father told her to write a follow-up letter to convince the committee that she would be a good choice. The letters still did not mention race. She got in.

Growth is in one direction, Faulkner believes, since no one gets to go backward to relive life events. She uses the term “bounce forward.” What an interesting idea!