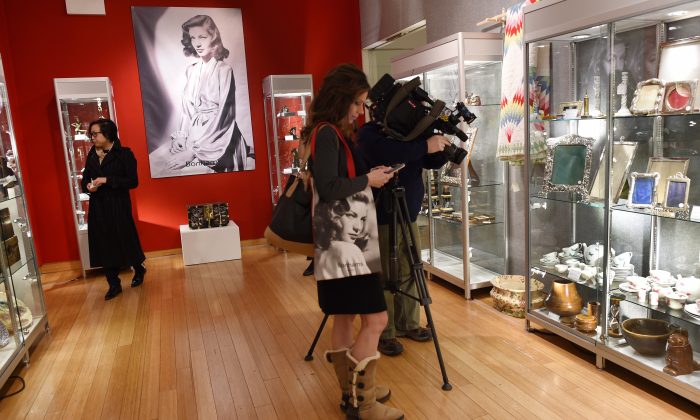 Reporters and camera crews get a preview of items from the Lauren Bacall Collection at Bonham's in New York on March 24, 2015. (DON EMMERT/AFP/Getty Images)
Art Marketplace

Of the recent Lauren Bacall Collection auction held March 31 at Bonhams New York, every one of the 740 lots sold, bringing in a total of $3.64 million. More than 1,500 bidders from 34 countries took part. Jon King, the director and vice president of Bonhams who orchestrated the sale, expressed warm appreciation for the worldwide expression of enthusiasm and affection for the memory of Bacall.

I had the good fortune to speak with soft-spoken, charming King prior to the two-day auction (featuring more than 750 items) of the late stage/film star Lauren Bacall’s extraordinary collection.

What became a strong friendship between Bacall and King developed out of Bacall’s daughter Leslie Bogart approaching Bonhams West Coast branch, because Bacall wanted initially to sell a few prints. When the connection was switched to Bonhams New York, King took over.

“Ms. Bacall would invite me every few weeks to the Dakota [the elegant apartment building where Bacall lived with her second husband, Jason Robards].” Ultimately, a friendship was born between them.

“She could speak just about any subject. She really listened and she always had an opinion. Whatever you said interested her although she did not always agree,” King recalls. Regarding her early background: “She was born and raised in New York and I think didn’t go beyond a high school education. Life educated her. She wanted to be a Broadway actress early on.”

When she made the cover of Harpers Bazaar as a model, Howard Hawks took noticed of her and flew her to Hollywood when she was 19 or 20. What followed was the film “To Have and Have Not.”

“That was the beginning of her film career and, of course, her relationship with Humphrey Bogart, whom she later married,” Kind said.

A Love of Sculpture

Bacall was particularly attracted to Henry Moore’s sculptures and had a deep relationship with him. King noted, “When they met in 1976 she was star-struck by him, and he was equally star-struck by her. Whenever she was in London she would often bring her children to visit him in his studio.

Over her lifetime she bought close to a dozen sculptures; in total she owned about 34 of his works, including many lithographs. Her family did keep some that were near and dear to them.” (Family includes her children Leslie Bogart, Stephen Bogart, Sam Robards, and Robards’s wife, Sidsel.)

Of her career, King noted, “She received great personal satisfaction from her work on the Broadway stage, as opposed to movies.”

A Queen of Reinvention

Bacall herself has written in her autobiography “Now,” “I reveled in the response that came to me from those audiences [at “Applause”). Who wouldn’t want to recapture that rush of warmth and affection wafting over the orchestra pit and footlights. And hitting you right between the eyes.” Her performance in “Applause” won her a Tony.

King commented, “The amazing thing about her was the length of her career. She reinvented herself a few times. There was the Broadway career, Hollywood. She was also an amazing writer. When I first started reading her autobiography I asked if I she’d had any help writing it. And she didn’t. No ghost writer, it was all her own work.”

She loved to go antiquing, her great hobby, and collected wherever she was. King commented: “A good deal of what we’re selling was in her first home with Humphrey Bogart. She bought things in Australia when she took “Applause” on tour, a great deal in London when she lived there. Paris was her favorite city. She bought things there as well. And she had a lovely French accent,” King added.

Some people have compared Bacall’s jewelry to the Elizabeth Taylor collection. King said, “There is no comparison. It was a different taste. Ms. Bacall did not go in for large, overstated pieces, her taste was very subdued.” He added, “Bacall wore jewelry, the jewelry did not wear her.” She was particularly enamored of jewelry by Jean Schlumberger, the noted French designer.

King helped take a cross sample of a number of pieces of her collection to Hong Kong, Paris, London, Los Angeles. King noted: “It was interesting to hear people’s reactions, hear stories of what Lauren Bacall meant to them. Very gratifying, very nice to see. The exhibit included a small sample of Robert Graham sculpture, Henry Moore, a small painting by Noel Coward [an interesting scene of Jamaican life by the noted playwright, actor, writer], a red chalk portrait by Aaron Shikler.

Of the auction itself, whose results went beyond anyone’s wildest dreams, King said: “We have been humbled by the worldwide outpouring of enthusiasm …Bacall’s legacy will live on in the homes of her countless admirers.”

Diana Barth publishes New Millennium, an arts publication. She may be contacted at diabarth@juno.com