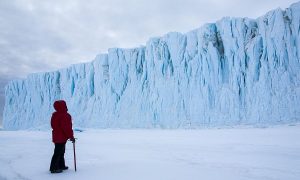 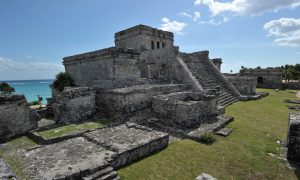 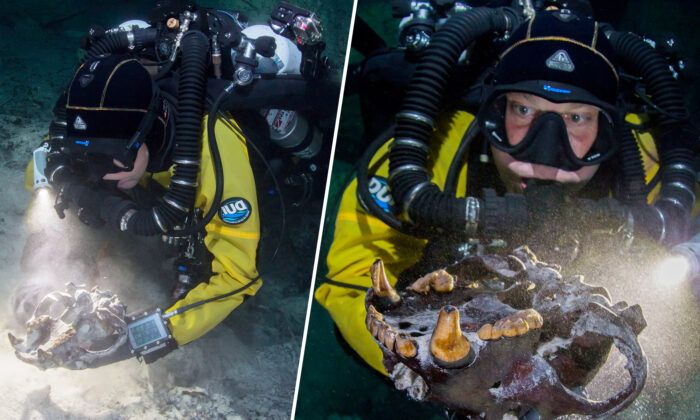 Bones of Ice Age Beasts From Over 13,000 Years Ago Found in Underwater Cave in Mexico

Bones of Ice Age beasts that roamed Earth more than 13,000 years ago have been found in an underwater cave in Mexico.

The prehistoric animals including giant sloths, saber-toothed cats, and ancient elephants were found alongside the remains of a 15-year-old girl named Naia—the most complete early human ever found in the Americas.

The exquisitely preserved bones were found at the bottom of a 200-foot-deep pit known as Hoyo Negro—Spanish for “black hole”—on the Yucatan peninsula.

They reveal how humans and a menagerie of exotic creatures migrated between North and South America after the Isthmus of Panama connected the continents at the end of the last Ice Age.

The animal bones shed light on the strange world inhabited by Naia, who is believed to have taken a fatal fall after wandering into the cave system looking for freshwater. This is likely to have been the same fate that befell the wild creatures.

Later, rising seas brought on by melting glaciers raised the water table hundreds of feet, flooding the caves and entombing the skeletons.

Corresponding author Dr. Schubert said: “The Hoyo Negro pit is bell-shaped, approximately 62 meters (203ft) wide at the base, and served as a natural trap for animals moving through the cave in the late Pleistocene.”

Mammals unearthed on the surface of the floor include multiple ground sloth species, including the newly named Nohochichak xibalbahkah.

Dr. Schubert further mentioned: “In addition, bones and trackways of extinct fauna are known from the upper passages.”

The team of cave divers first came across Hoyo Negro in 2007 and were stunned to find a massive water-filled chamber rife with animal remains and the skeleton of Naia.

Expeditions through the years have mapped at least 28 animal skeletons within the pit, some of which are extinct, but others, like the puma and white-nosed coati, are still around today.

“More-detailed skeletal descriptions are in progress. Identifications were made based on current literature.”

The first complete analysis of two of the animals—the cave bear, Arctotherium wingei, and the giant wolf, Protocyon troglodytes—has now been carried out for the first time.

They expand the distribution of these predators to 1,250 miles (2,000 km) outside South America, where they were thought to have been confined.

Radiocarbon dating of protein from Arctotherium’s teeth dated it to between 12,850 and 13,430 years old, reports the Royal Society journal Biology Letters.

Dr. Schubert said: “With multiple individuals identified, the bear is the most abundant large mammal from Hoyo Negro.

“Individuals range in age from sub-adult to adult and represent the South American short-faced bear, Arctotherium.”

He said if the existing fossil record is an accurate representation of Arctotherium and Protocyon through time, and these species developed strictly in South America, they must have migrated across the Isthmus.

Dr. Schubert also said: “Further, if this migration occurred during the latest Pleistocene, in line with existing radiometric dates, one possibility is they moved north during or since the last full glacial, between approximately 35,000 and 12,000 years ago.”

He added: “Unlike earlier interchanges, this involved humans and culminated with the mass extinction of most American megafauna, including Arctotherium and Protocyon.”

About 12,000 years ago, at the end of the Pleistocene, the melting of the ice caps caused a dramatic rise in global sea levels, which flooded low-lying coastal landscapes and cave systems.

Before this flooding, ancient animals such as cave bears, giant sloths, and early Americans would have seen Hoyo Negro as a waterhole within a cavern.

The migration of animals and humans between the continents is known as the “Great American Biotic Interchange.”

It is believed to have occurred during four major episodes that began about 2.5 million years ago.

After the Isthmus of Panama tectonically rose from the sea some 3 million to 5 million years ago, the ecosystems that existed on the two continents were at last able to mix and mingle.

However, paleontologists still know very little about this massive interchange, since fossils are notoriously hard to come by in the tropical forests that cover the region.

By contrast, Hoyo Negro is a fossil bonanza. The underwater cave preserved entire animals because the carcasses had nowhere to go, and the low-oxygen waters ensured that the remains laid undisturbed for more than 10,000 years.

Experts say Naia was 15 to 16 years old at the time of her death. She was about 5 feet tall and weighed about 110 pounds (approx. 50 kg) at her heaviest, although there was evidence she had suffered episodes of famine.

She had broken her arm but it was later mended.