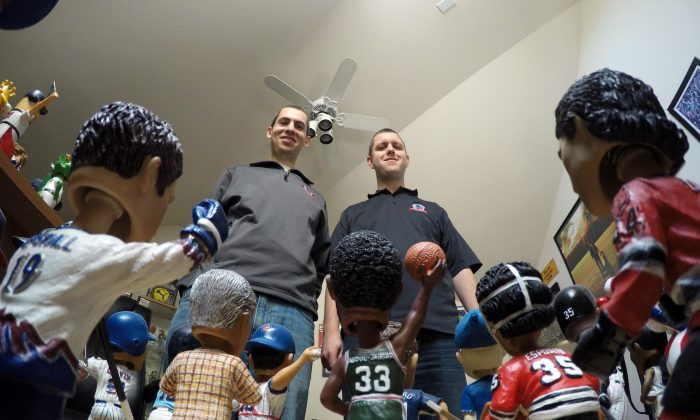 In this April 16, 2015, photo, Phil Sklar, left, and Brad Novak sit with some of the bobbleheads they have collected since quitting their jobs last year to start the National Bobblehead Hall of Fame and Museum in downtown Milwaukee. (AP Photo/Carrie Antlfinger)
Life & Tradition

MILWAUKEE — There’s a puppetry museum in Utah. A vacuum museum in Oregon. A roller skating museum in Nebraska. So, why not a bobblehead hall of fame and museum in Wisconsin?

Two Milwaukee men think their state is the perfect place for this particular type of quirkiness.

“Milwaukeeans also enjoy fun — as can be witnessed by the love for beer, sports and festivals — and bobbleheads are fun,” said Phil Sklar, 31, co-founder and CEO of the National Bobblehead Hall of Fame and Museum.

He and friend Brad Novak, also 31, quit their jobs in the business world within the last year to work on starting the museum. They also want to serve as a clearinghouse for bobblehead history and news.

“We’re really looking to become the go-to source for anything bobblehead-related,” Sklar said.

Their aim is to display the world’s largest collection of bobbleheads, 10,000, ranging from athletes, mascots, characters, regular and famous people and others on vibrating shelves; there’s no listing claiming that title on the Guinness Book of World Records’ website. So far, they’ve collected 4,000 bobbleheads in a decade — most have come in the last year from sporting events, yard sales, auctions, websites and thrift stores. Among their weirdest: the “Flo” character from Progressive insurance commercials as well as all of the Milwaukee Brewers’ racing sausages on one bobblehead.

Bobblehead history is hard to come by, Sklar said, but they’ve found some from as far back as 1901, ceramic animals made in Germany. The figures are popular because sports teams usually give away a limited number of them for free as promotions, he added.

In Miami, Marlins Park publicly displays some 700 bobbleheads of current and past baseball players, mascots and broadcasters.

“It’s incredibly popular,” said Matt Britten, the Marlins’ director of marketing and promotions. “I thought after a little while, maybe a couple of years at the ballpark that maybe some of the interest would wane a little bit, but every time we have a home game this is one of the most popular fan attractions.”

Sklar and Novak tried to raise $250,000 through Kickstarter in January, but reached only about $49,000. Though they’ve used some savings and money from friends and family, the majority of their funding comes from — what else? — helping design custom bobbleheads for sports teams, other organizations and individuals, which will continue once the museum opens.

In January, the month in which National Bobblehead Day is observed, the two plan to preview some of the figurines at a local art gallery. Their hope is to find a temporary location in downtown Milwaukee later in 2016 and maybe open for good in the proposed new Milwaukee Bucks arena complex.

For now, it’s about getting the word out, and to do that, they’ve even designed bobbleheads of themselves as promotional items.

“The one of me is probably my favorite,” Novak said.