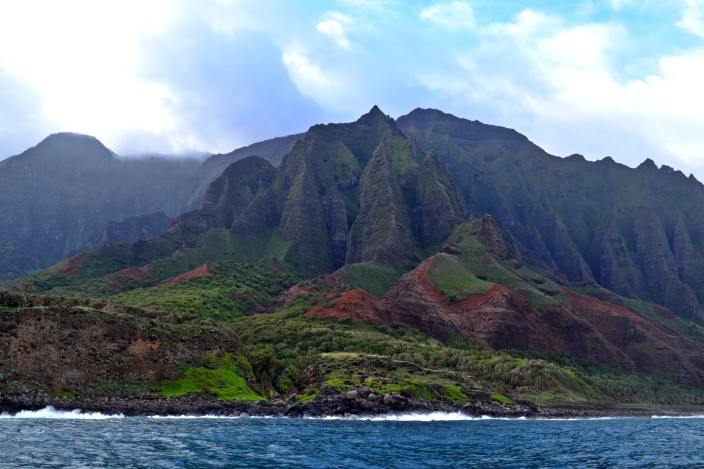 Next day we were down to our final day on Kauai and had reserved a spot for two on one of the Napali coast boat tours. It left from Waimea at 7 a.m. which meant an extra early get-up for us driving an hour and twenty minutes south from Princeville. We hit a few sprinkles on the way (an ominous sign we should have heeded) and Irina didn’t feel all that well, so that by the time we arrived in Waimea we were seriously considering abandoning the whole idea, which only proves you should always go with your gut instinct. The clincher was realizing we would still be charged full price for the missed tour due to their 24 hour cancellation policy, and not wanting to blow a couple hundred bucks for nothing, we climbed on board.

The weather improved, and we had a mix of blue sky and sun peeking through the clouds as we left the marina and headed out into windblown, choppy waters. The boat was a 25 foot Zodiac style craft, basically a gigantic life raft powered by twin 250 cubic inch outboard engines. Fourteen passengers sat along the sides clinging to ropes and a crew of two ran the show, Captain Quincy or Captain Ahab or Captain Kangaroo, I forget now, and his first and only mate, Queequeg.

The first twenty or thirty minutes went without incident as we headed north, the boat lurching steadily through the waves, a little rough but not troubling. We’d both taken our Dramamine and had high hopes for a fun time. The problem began when we stopped dead in the water and the boat began sloshing and rolling around while Captain Whatshisname explained something about the shoreline. It was interesting information, but after about one minute of rolling, my poor wife leaned over the side and began to feed the fishes, a position she would occupy for most of the next four and a half hours whenever the boat stopped and pitched and yawed.

The Napali coast is every bit as stunningly beautiful and exotic and unique as advertised, the spinner dolphins were fun to watch, and we did see a few whales breach, but it’s hard to fully appreciate any of this when your spouse is heaving her lungs out every twenty minutes or so and looking as green as the lush vegetation on the steepled hillsides. I took photos of the coastline inbetween rubbing her back occasionally and murmuring consoling words, hoping she might improve. Never happened.

Captain Ahab’s big thing was whale sightings. No, not white whales, but any whales at all. Winter is Humpback time in Hawaii, so when someone would spot a blow, off we’d go chasing whales at full speed and then stop. Roll, pitch, up, down, sideways, barf.

This pattern of sightseeing, whale watching and retching continued for what seemed a long time to me and must have felt like eternity doubled to Irina. I wanted to offer Captain Kumquat a hundred bucks on the spot to take us back or even to dump us on the nearest beach, but figured everyone else on board was having a great time and they could all pool their money and outbid me.

One of the advantages of the Zodiac boat was its ability to manuever in very close to the sheer, rocky cliffs along the shoreline, venturing right inside (though not very far inside) some of the many caves and nearly underneath a couple of waterfalls.

Eventually we reached the turnaround point at Hanakapiai Beach – the same beach we’d hiked to a couple days earlier from the north shore – and thought maybe the worst was over and we would be back in port soon. No such luck.

Looking back the way we’d come we saw a solid wall of ugly, threatening, dark grey clouds between us and Waimea and extending far enough out to sea that there was no way around it. We were all about to get very wet and cold. Into the storm we plunged. The waves got bigger, the wind-whipped rain stung our faces and whatever protection we wrapped ourselves in – towels, windbreakers, sweaters – was all soaked within minutes.

So let’s take a second to summarize. Seasickness? Check. Drenched with salt spray and rain? Check. Shivering cold? Check. Having fun yet? Mm, not so much.

The storm behind us, we continued on our way to port. That is until one of our eagle-eyed fellow passengers spotted another whale spout a couple hundred yards out and had to open her big fat mouth to Captain Knucklehead, who immediately charged full speed in that direction. I was tempted to shove both of them overboard and stage a full-fledged mutiny but didn’t think I had enough support to succeed.

We sloshed around some more, Irina looked like death warmed five times over and said weakly, “Why must I have this torture?” I didn’t have a good answer.

Thank God we did finally return to port, but not without one final extended middle finger from Mother Nature in the form of another rain squall which hit about two minutes from docking, so that by the time we sloshed off the boat and headed to our cars we were once again thouroughly drenched from head to toe.

And that, folks, is why I highly recommend taking the helicopter tour of Kauai.

I expected the rest of the day to be a wipeout, but my wife is a tough gal, and after changing into dry clothes and relaxing with a cup of hot tea for about half an hour, she perked up and was even able to gain some perspective, if not exactly laugh, about the whole ordeal.