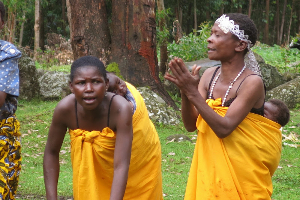 “Wakoze Kuza,” says Batwa pygmy Chief “Steve” Varaheegwan, welcoming us to his tribal village in the Virunga Mountains of Uganda as Herbert, the vivacious Ugandan liaison, translates. The entire Batwa tribe of about 75 men, women and children stare and I try not to show my surprise at their relatively normal height. These people are certainly not the pygmies I imagined. Herbert later explains that they have intermarried with other tribes.

I’ve just huffed and puffed two hours up an unending hill at an altitude of 8,500 feet to meet this indigenous Ugandan tribe, a cultural visit which the safari lodge where I’m staying, Mt Gahinga Lodge offers to Muzungus (as we foreigners are called by the Ugandans).

The new Batwa cultural program was created by Volcanoes Safaris Partnership Trust to help the Batwa revive their traditions so their history and culture can be better understood by the local communities and by the younger Batwa generation.

The Trust has built a Batwa Heritage Site to show how the tribe used to live in the forest, they’ve constructed a cultural center where the Batwa women learn to sew and make straw baskets, and a cultural dance, singing and drumming performance which I am hoping to see shortly, with the other four Mt. Gahinga Lodge guests who’ve hiked up the mountain with me.

We are still catching our breath when the Chief explains that the tribe will perform the dance ceremony tomorrow for the entire community, on the lawn of Lodge. He offers us a tour of the round huts made from branches and twigs and with thatched roofs. Up until 1992, the Batwa lived in the forest and made their living hunting, foraging for vegetables, and harvesting honey; then the government evicted them and turned their land into a national park.

Now they live as squatters in these drafty huts with no water or electricity or any other necessities we’re used to in the west. Inside, the sparse walls are blackened from cooking. There are no beds, no furniture, just a couple of burned pots and a sleeping space on the bare ground.

As we exit the cramped hut, some children crowd around us, including a little boy wearing a man’s shirt that comes down to his ankles. A girl wearing a torn yellow dress touches my hand and giggles. Both males and females of all ages wear their hair cropped short, and the only way you can tell who’s who is that the girls wear thread worn skirts.

They might be poor, but they look healthy and their smiles are real. Batwa children don’t go to school but often help their parents who eke out a living working in the fields and performing cultural visits. Tomorrow’s dance ceremony, for which they will receive a small sum, helps pay for salt, soap, sheep and goats.

While the dance ceremony helps keep their cultural traditions alive, they also abandoned some customs after leaving the forest, such as praying to their gods. They’ve been introduced to other religions and many, such as Chief Steve, have adopted Christian names. Herbert translates as one of the older men tells me, “Life in the forest was good. We never lacked for anything; we had food, we had medicinal herbs and meat, we had clean water, but now have to buy our water.”

Life was not monetary in the forest, the older man says. “When we left the forest, our first challenge was land.” At first, other tribes received the Batwa because they provided cheap labor, but now it’s difficult for them because the population has increased and there are few jobs for them.

It’s time for a photo opp, and the four of us take turns posing for photos with the tribe. Then Herbert announces we’re leaving. It’s not as though going back down will be a hardship –the scenery of gigantic extinct volcanoes in every direction is gorgeous, not to mention children waving as they herd goats, women carrying huge bundles of branches on their heads, and men digging in the fields with hoes – the images are priceless and so far removed from my city world. But I’m not ready to leave so soon.

Before the trip, I asked Hohner to make a donation of 30 pink plastic Hohner harmonicas, as I knew they’d be perfect gifts for the Batwa children. But as I do a quick count,I see there are at least 50 kids. How do I decide which ones should get a harmonica?

Hopefully, there will be another opportunity. But I suddenly have an idea. I pull out my own harmonica from my pocket and hold it up. They look curiously, never having seen one, the usual reaction I get when I show people from foreign cultures my little pocket-sized ten-holed instrument.

I began to play harmonica a few years ago, primarily to communicate in tongues I didn’t speak. Music is the universal language, a perfect icebreaker wherever I am. I clap my hands in a rhythm and pantomime that the Batwa should clap with me. Tentatively, they put their hands together.

I play a boogie-woogie and by the third bar, they’re clapping loud, swaying, and tapping their feet on the ground. When I finish, they break out into huge smiles and applaud. I only wish I had enough pink harmonicas for everyone.

Copyright © 2014 by Go Nomad. This article was written by Margie Goldsmith and originally published at www.gonomad.com