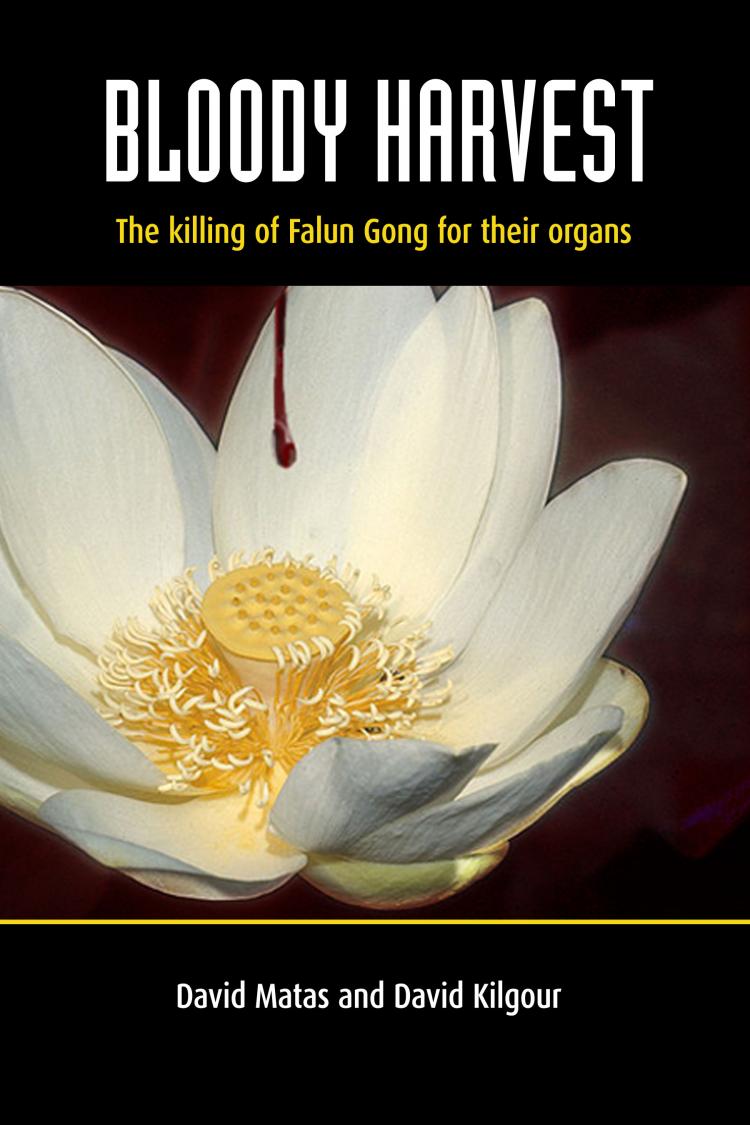 OTTAWA—Bloody Harvest: The Killing of Falun Gong For Their Organs is a meticulous account of true events that reads like a horror story.

A portent of that horror comes early in the book: “The allegations, if true, represented a disgusting form of evil which, despite all the depravities humanity has seen, was new to this planet.”

In May 2006, coauthors David Matas and David Kilgour received a letter from the Coalition to Investigate the Persecution of Falun Gong (CIPFG) asking them to investigate allegations that imprisoned Falun Gong practitioners were being used to supply vital organs for the transplant tourist industry in China.

With no eyewitness testimony available and unable to enter China, the authors used independently verified sources of evidence and a deductive reasoning model to conclude that the allegations were indeed true.

The result of their investigations was a preliminary report released in July 2006. A second report, with new substantiations, was released in January 2007. Both were published on the Internet.

The newly released book is larger than the reports and contains previously unpublished materials. It is presented in two sections: the evidence that led to the authors’ conclusions, and the responses to the reports, followed by some suggestions on how to stop the practice of using living organ donors in China.

Kilgour and Matas concluded that “A set of peaceful, healthful exercises with a spiritual foundation was made illegal in 1999 by the Communist Party because of fear it might threaten the Party’s dominance, and it appears that many human beings engaged in these exercises have been in effect executed for their organs by medical practitioners.”

Matas, a human rights lawyer who received the Order of Canada for his human rights work, and Kilgour, a former crown prosecutor and former Member of Parliament, have produced a damning body of evidence that could shake the world press and various governments from their complacency regarding the Chinese regime’s persecution of Falun Gong.

CIPFG chair Clive Ansley said he’s delighted with the release of Bloody Harvest and hopes the book “sparks a lot more public debate than we’ve had up ’til now.”

He said the mainstream press has been “inexcusably derelict” by not reporting on the illicit harvesting of Falun Gong organs in China.

“The knowledge is there, people in the media know it, but they’ve done almost nothing about publicizing it, which means that a very significant percentage of the population in North America particularly remains unaware of the fact that we’re watching another holocaust essentially.”

Starting with the knowledge that 1999—the year in which the number of organ transplants performed in China began rising dramatically—was the same year that the persecution of Falun Gong started, the authors uncovered various supporting facts that explain why the abhorrent organ harvesting started and how it is carried out. Some of the many factors described in the book include:

• No system for voluntary donation exists in China, and a societal aversion to the practice means organ donors are rare.
• Numerous testimonials of previous Falun Gong prisoners detailing how they were routinely blood tested and examined while regular criminal inmates were not.
• Testimonials of people who traveled to China to receive transplants and the impossibly short wait time for a matched organ to become available.
• Websites advertising living organ donors whose renal function is verified before the operation.
• The huge number of transplants performed annually cannot be accounted for using executed prisoners or brain-dead patients.

The involvement of military physicians and hospitals trafficking in human body parts coupled with the systematic persecution of Falun Gong adherents resulted in large numbers of organ transplants occurring without any record of the source of the donors.

“A full explanation of the source of all organ transplants would disprove the allegation,” wrote the authors.

“If the source of all organ transplants could be traced, whether to willing donors or executed prisoners, then the allegation concerning the Falun Gong would be disproved. But such tracing is impossible.”

The part played by the western world in enabling the harvesting of organs from living human beings is also discussed, including the role of economic considerations as businesses and governments try to please the communist leaders so they can maintain trade relations and make money in China.

The authors make a case for continued human rights advocacy in China and explain that although the Chinese regime can’t be forced to change its principles, it can be confronted with the facts. The facts make the regime look bad, and China fears loss of face above all else.

A book launch will be held at the Women’s Art Association Gallery, 23 Prince Arthur Ave., Toronto on November 15 from 2 p.m. to 4 p.m.

In Ottawa, the authors will hold a press conference in the Parliament Hill press room, sponsored by Parliamentary Friends of Falun Gong, at 10 a.m. on Monday November 16. A book launch will be held at 4:30 p.m. in room 208 West Block from 4:30 to 6:00 p.m. Please email parliamentaryfriends@gmail.com by 2 p.m. on 16 November to ensure security clearance.