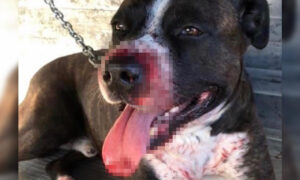 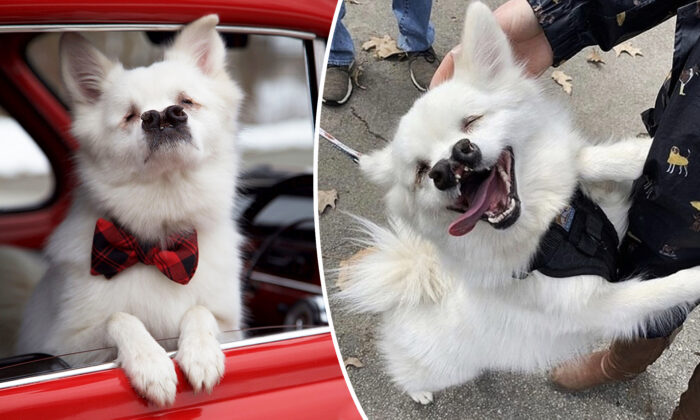 A blind rescue dog doesn’t stop smiling with glee from ear to ear despite being born with a significant cleft palate which makes him appear to have two noses.

Ashton’s condition meant that his nostrils grew outwards and apart from each other and left him blind from underdeveloped eyes. Additionally, the condition also leaves him with what appears like two separate noses that many compare to the shape of a bat.

A cleft palate is an opening between the mouth and the nose that happens when the tissues separating these two cavities do not grow together properly.

The fluffy American Eskimo dog was originally rescued from a center in Ohio but was returned 18 months later before eventually being adopted by Leah about three years ago.

The adventurous dog now lives with Leah, 33, and her husband Nathan on a 25-acre farm outside Niagara Falls, Canada, with four other dogs.

According to Leah, Ashton’s unique nose structure comes in handy in all sorts of situations, as he has learned to use its unusual shape to pry open dog gates and doors so he can go where he pleases.

“He uses his nose like a tool by prying open our one dog gate which is like an accordion style and to open the dog door sometimes if he doesn’t feel like running through it,” Leah said.

However, Leah, who truly adores her adventurous canine, wouldn’t have it any other way.

“I like to call his nostrils little cinnamon buns,” Leah said. “I loved his nose when I first saw him and I still do now. If anything I love him more. Two nostrils going in opposite directions means double the nose boops and kisses.”

However, Ashton remains completely unaware of his condition as this has been the only way he has lived. He doesn’t know a world with sight and nor does he realize that his nose is a bit different as he eats and drinks completely normally.

Sharing more details about his condition, Leah said Ashton has “an extremely small hole in the roof of his mouth,” but it can only be visible if one is looking for it.

Although Leah and Nathan have taken Ashton to different vets over the years so as to improve his condition, the vets all advised instead to leave it alone as “surgery would not improve his quality of life because it is already great.”

“He is very healthy. He doesn’t get eye infections, his teeth look great and his vet was very happy with the overall health of his mouth,” Leah said.

Leah has often been asked by various curious people about Ashton’s nose; as they sometimes fail to understand that he was actually born that way. “His cleft nose is very spaced and many have not seen anything like that before,” Leah said.

However, when people get to know Ashton, they don’t seem to notice it any longer and just see a happy dog living a normal life.

“When I continue and tell them he is blind well they are usually stunned,” Leah said. “Most people don’t realize he is blind until I mention it as he moves with ease and relies very heavily on his hearing.”

Leah adds that she hasn’t really met with any negative comments about him, but shares that even if she did, she would shrug it off.

“He has a strong will to live and enjoy life,” Leah added. “He’s a pro at going with the flow and living each day to the fullest.”

According to Leah, Ashton is adventurous, too, and truly enjoys doing different activities with her.

“He also loves to play fetch,” Leah said. “I also enjoy paddleboarding with Ashton and he also does an annual agility camp once a year.”

Leah, who has for the first time come across the “wonders” and “resilience” of rescue dogs, shares they are a “gift.”

“The love and happiness they bring into our lives is something we should never take for granted,” Leah said.

The Epoch Times Staff contributed to this story.