Blessed, Joyful, and Full of Hope After Shen Yun 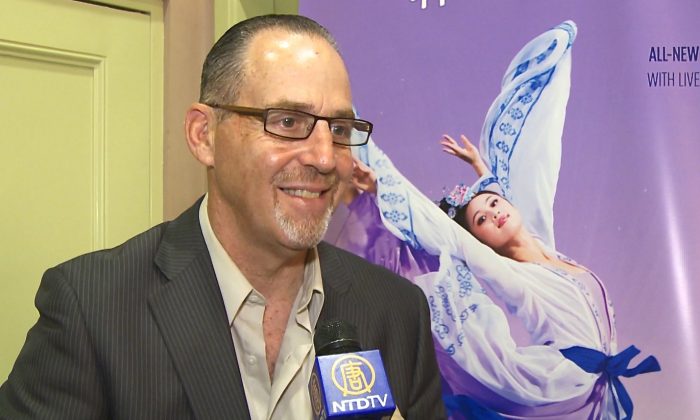 Richard Gaglio attends Shen Yun Performing Arts in Philadelphia's Merriam Theater, on May 4. He said Shen Yun, “It blesses you and it moves you, and makes you think beyond just who you are." (Courtesy of NTD Television)

PHILADELPHIA—Richard Gaglio is in sales, but he didn’t have to come up with a special pitch to get across how profoundly impressed he was by Shen Yun Performing Arts.

Mr. Gaglio saw the performance at the Merriam Theater on Saturday afternoon, and remarked that for over four decades he had not been as moved by a performing arts experience as he was this day.

“Nothing has excited me as much as seeing this Shen Yun dance [group],” he said. “It blesses you and it moves you, and makes you think beyond just who you are. And it gives you hope that the best is yet to come.”

His reflections on the performance tumbled forth with little prompting from a reporter.

“It brings you peace. It brings joy. And it gives you a chance to build hope,” Gaglio said. “Each dance sequence, their faces, their movements, all at the end say: There’s hope for tomorrow, there’s a reason to live tomorrow, there’s a reason to go on tomorrow. And when you can do that without speaking, you’ve elevated not only yourself, but the audience, to a place that they don’t get a chance to go. Ever.”

Mr. Gaglio continued: “Electric isn’t the right word. It’s … there’s … there’s an electricity in the air that makes you want to see more, to look more; it makes you part of the show. You’re not just sitting and watching, you’re sitting and being part of something bigger than what you are. If you notice, there’s nobody talking, there’s nobody looking around, everybody is riveted right there on each and every dance and each and every movement. I’d come back. If I live to be 100, I’ll come back every year.”

Mr. Gaglio concluded: “Over the years, this dance will make a difference not just in New York City, not just in Philadelphia, but throughout the world.”