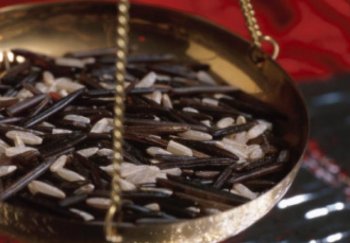 SUPER-HEALTHY: Black rice is an even better source of antioxidants than blueberries and blackberries. (Photos.com)
Food & Dining

Jack Phillips
Breaking News Reporter
Jack Phillips is a breaking news reporter at The Epoch Times based in New York.
View profile
Follow
biggersmaller
Print
Black rice was recently discovered to contain more antioxidants than blueberries, which were considered a leading source of antioxidants for a long time.

The grain contains anthocyanin antioxidants, similar to those found in blackberries and blueberries, according to a report by scientists at the University of Louisiana published on Thursday.

Despite their healthy benefits, blueberries and blackberries can be quite expensive, and black rice is a much cheaper alternative to providing antioxidants.

In ancient China, a certain type of black rice was dubbed “Forbidden Rice” because only the nobles ate it and was not distributed to the common folk.

“Just a spoonful of black rice bran contains more health promoting anthocyanin antioxidants than are found in a spoonful of blueberries, but with less sugar and more fiber and vitamin E antioxidants,” said Zhimin Xu, the Associate Professor at the Department of Food Science at Louisiana State University Agricultural Center in Baton Rouge, La., in a statement.

Xu analyzed black rice that was grown in the Southern US, adding that food manufacturers can use it in health products like cereals, cakes, bread, and other items to increase nutrition content.

“If berries are used to boost health, why not black rice and black rice bran?” Xu asked. “Especially, black rice bran would be a unique and economical material to increase consumption of health-promoting antioxidants.”

These types of antioxidants are believed to fight cancer, heart disease, and other health problems. However, there is not enough evidence as to whether anthocyanin antioxidants can get rid of free radicals produced in the body.

{etRelate 37587, 5791, 15060}Xu added that the pigment contained in black rice bran can range in color from black to pink, and used as an alternative to artificial food colorings. Xu mentioned that artificial colorings have been linked to cancer and other health problems.

Black rice is used mainly in Asia for food decoration, noodles, sushi, and pudding. Xu said that Louisiana farmers are interested in growing black rice, adding that US residents should embrace its use.