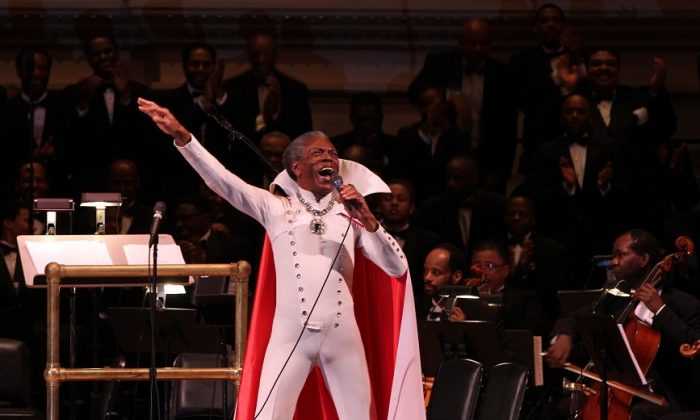 Actor Andre DeShields dons the original Wiz costume in a performance of “So You Wanted to See The Wizard” at “Black Stars of the Great White Way,” in Carnegie Hall in New York on Monday. (Lisa Pacino/Under the Duvet Productions)
Arts & Culture

NEW YORK—The stage at Carnegie Hall exploded in a pulsing array of red and white, “So, you wanted to meet the wizard,” Andre De Shields began the signature song of the wizard from the Broadway musical “The Wiz.” Forty years later his presence is as captivating as it was in the original production.

The Monday concert was a tribute to African-Americans on Broadway and their contribution to the artistic history of America and the world. The artists wanted to honor those who came before them and to mentor those who would come after them.

Speaking before the performance, De Shields was reverent, “In this room is the seed of all the events and personalities that have contributed incomparably, indisputably and excellently to world culture.”

The first African-American to grace the main stage at Carnegie Hall was soprano Sissieretta Jones in 1893. Exactly 121 years later “The Black Stars of the Great White Way” brought history to life on the same stage.

“This is celebrating 100 years of the influence and legacy of African-American men on Broadway and at the Carnegie Hall,” said producer David H. Greer.

Entertain and dazzle is what these men do best, yet it was the living history in the room that made the show.

“This event is one of the greatest historical events to come down the pike,” said Obba Babatunde, who was nominated for a Tony award for his work in the original Broadway show “Dreamgirls” in 1981.

Babatunde is a veteran performer, with roles in everything from TV shows such as “Fresh Prince of Bel Air” to movies like “The Manchurian Candidate,” yet his movements belied his age as he darted around the rehearsal room conversing with friends he has not seen in decades.

“Personally, the experience for me is effusive with love and joy,” said Babatunde.

The event was a reunion as well as an opportunity for these men to pay tribute to those that paved the way for them, and to pass on all they have learned to the next generation.

“Black people have contributed to Broadway in major ways and that needs to be recognized,” said actor Keith David. The low rumble of his voice was familiar. David was the voice behind many animated stars such as Apollo in the movie “Hercules,” Okkoto in Hayao Miyazaki’s film, “Princess Mononoke.”

Through their creative expressions these men have set a standard of excellence that must be honored and built upon, according to David.

He began a roll call: “The Eubie Blakes, the Duke Ellingtons, the Luther Hendersons, they have set standards that we need to not veer from. It is a way of preserving the legacy,” he said.

“Let’s talk about the political history of jazz,” producer Chapman Roberts said, addressing a full house. Roberts, a tall man, with sloped shoulders and a prominent salt and pepper beard strode across the stage, gripping the microphone. He was introducing the song “I’m Just Wild About Harry,” sung by Jeffrey V. Thompson.

An adaptation of the song helped win the presidency for Harry Truman in 1948. African-American composers Noble Sissle and Eubie Blake wrote it in 1921 for the Broadway show “Shuffle Along.”

“This song was written by two black men, about a black man, and was used to put a white man, in the White House. Now that is black power,” said Roberts.

Thompson, who starred in the original Broadway show “Eubie!,” struck the first note as the audience erupted in laughter and applause.

The art and music of African-Americans has had a profound and often underrepresented impact on world culture.

The racially mixed bands helped counter the bad image created by the reality of racial segregation in the South.

Roberts paused to give a brief lesson in history: On a State Department tour to Saudi Arabia the king asked Dizzy Gillespie how he liked the country, to which he replied, “I like it very much, especially because I can stay in a four-star hotel in your country and I cannot in mine.”

“That was the end of Dizzy on those tours,” Roberts said.

A Sea of Beauty

Hidden among the 65-piece orchestra and the chorus were dozens of men whose names are not well known, yet whose dedication to their craft has shaped American theater and music history for the past 50 years.

“There is a sea of beautiful faces up there, many of whom I haven’t seen in years. So when I entered the rehearsal hall my breath was taken away,” De Shields said.

Among those faces is that of Kenneth Kamal Scott, who as a child, sang alongside bass Paul Robeson, a leading artist with the Metropolitan Opera. Later, soprano Leontyne Price mentored him.  Scott teaches vocal technique at the New School for Jazz in New York and as an artist in residence at Morgan State University in Baltimore.

Scott was one of those rare talents able to successfully transition from a childhood career to an adult one. “It is a very difficult transition. Most people don’t make it,” Scott said. “They may still be performing but they may be very severely injured people.”

The history of the performing arts is filled with the names of those whose childhood fame damaged them irreparably, from Judy Garland to Michael Jackson.

Scott earned the role of The Wiz as an understudy for De Shields and went on to play the role with the touring company for five years.

In an effort to pass on his knowledge to others he began teaching. “If you are not taught the formal things then you just stay at potential and you never grow,” Scott said.

Looking out at that same sea of faces Scott found himself surrounded by students of years past. “Obba Babatunde was my student, way before he became the movie star that he is today.”

Producer Norm Lewis, who currently plays the role of the phantom in “Phantom of the Opera,” first conceived of this event as a way to pass the torch on to the next generation of performers.

He said young black children kept coming up to him, “saying that I was an inspiration to them, and here I am thinking I am just a guy who got a job.”

Lewis realized that he was a role model, showing these children an alternative to so many negative images that they see of themselves in movies and on TV. Not only that, he was in a position to do something about it.

Up on the stage Alde Lewis Jr. led a group of children in a tap dance improve. Lewis, with his bright eyes and slight frame, is the sort of dancer whose deft movements instantly command attention.

Lewis is the protégé of Charles “Honi” Coles, who “saw in my body that I needed to tap.” Coles mentored Lewis through his career and Lewis now strives to do the same through his nonprofit organization, A.L. Efficacy Movement.

The children, with big smiles, are a little dazzled by the famous stage as they emulate Lewis’s movements. He was teaching them the Shim Sham.

“The Shim Sham was the boogie down dance of the ’20s and ’30s, but they didn’t have taps,” Lewis explained before the show. He jumped up, counting out the rhythm with his voice while his feet flitted across the maroon carpet. It is easier to explain dance with movement than with words.

The children who joined the venerable crowd have all been in a show or two themselves. They are members of Broadway Browns, a community youth organization dedicated to educating children about the benefits and opportunities of Broadway.

When their son finished a run on Broadway with “The Lion King,” founders Nakata Fitch and her late husband Frederick D. Fitch realized what Scott knew from personal experience.

“Once the boys and girls leave the shows they are not doing anything else. They don’t know how to transition into an adult career,” Fitch said. She realized that many accomplished Broadway actors wanted to reach out to the next generation but that they needed an organization to come to.

Alphonson Jones, now 15, played Simba in “The Lion King” from 2009 to 2011. “Coming back here and performing with all the other black actors is amazing,” he said before the show, his mother Kathy Jones at his side.

Jones said that because of this experience her son sees himself as a part of a long tradition and feels it is his responsibility to, “pass it on and keep it going for the next generation.”

Within a century-old tradition there is a lot to pass on. “It is not just teaching the voice, it is teaching the love of excellence,” Scott said.

According to Scott, many of the young children want to be famous, but the old-timers know that fame comes and it goes while excellence never goes out of style.

“We are getting an opportunity to exhibit to the world at large that a standard of excellence is what one should always strive for,” said Babatunde.

Born in 1944 in South Carolina, no one knows this better than Larry Marshall. Marshall starred on Broadway in his youth, in big time hits like “Hair” and “Porgy and Bess.” After more than 40 years in the business he has done everything: sing, dance, act, and direct.

It’s a rough business and according to Marshall you survive by “doing just about anything in the business you can do.”

He has spent the last 20 years touring the opera houses of Europe directing shows that he once starred in.

On the stage were all those who have made it in spite of the challenges.

“It is a rejoiceful celebration,” said three-time Tony award winner Hinton Battle. “It is a history making moment, it is unbelievable.”

CORRECTION: A previous version of this article incorrectly stated who Kenneth Kamal Scott sang with as a child. He sang with Metropolitan Opera bass Paul Robeson. Soprano Leontyne Price mentored him, but did not sing with him as a child. Epoch Times regrets the error.