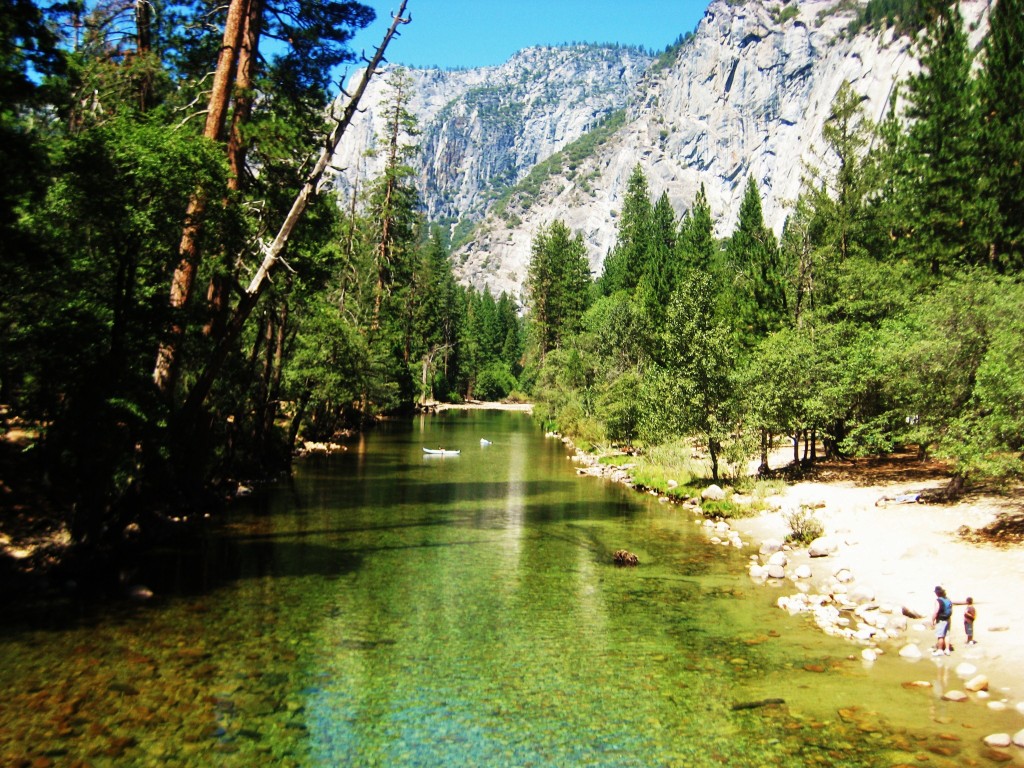 Its iconic mountains, rock formations, majestic waterfalls and giant sequoias set it apart from most other places in the world, and make it one of America’s most famed National Parks. Although the area is a gold mine for climbers, Yosemite is not just for the active – an exploration of the valley floor brings an abundance of wildlife to take in at your own pace.

A few years ago, along with my friend Harriet, I gathered my rucksack and headed out of San Francisco and took the Amtrak to Yosemite National Park. We briefly read about the place and thought it looked ‘pretty’ enough to spend a couple days. But we were wrong. Very wrong. ‘Pretty’ doesn’t even scratch the surface, it was complete and utter paradise, and we didn’t want to leave so soon.

To look at Yosemite’s landcape is to see the result of glacial erosions of granitic bedrock; deep valleys, soaring cliffs and domes that bring to life a land before human time. Such a unique landscape has been the subject of much geological interest and conservation. Many people and institutions work hard to make Yosemite thrive, but the two people who deserve recognition above others are Galen Clark and Amstel Adams.

Clark made the preservation of Yosemite his mission in later life, and prompted the legislation that protects Yosemite Valley and the Mairposa Grove of Big Trees (which he discovered). And since then the park has been inducted into the UNESCO list of World Heritage Sites. Adams, the other guy we need to thank was a photographer in the early-mid 20th Century whose images of Yosemite set alight the imagination of all those saw them, and brought attention to Yosemite from around the world. Together these two people made Yosemite a place of recreation and world-wide interest, whilst protesting against the growth of commercial development.

Whilst staying at Yosemite, you can pick from a variety of five different accommodations. Firstly, there are the few hotels in the park – these were a big no, no, on our tiny daily budget; secondly, are the cosy wooden cabins, which we passed with envy, then at cost number three, you can have a heated tent cabin, followed by a non-heated cabin. There’s also the option to camp but since we didn’t have a tent we opted for the very modest non-heated tent cabin. I would definitely recommend a tent cabin as it enhances the feeling of being in true wilderness.

Sure, it’s nice to stay in a hotel, but it’s more exciting to think that a bear might swing by!

You’re permitted to pack all your food and toiletries in a metal cabin located just outside each tent to avoid any unwanted furry fiends making a meal out of you. Needless to say this advice is not to be taken too lightly as black bears in Yosemite are not uncommon, as well as other animals including possums, coyotes and the less threatening (but much more annoying) mice that have a penchant for stealing food!

The next morning, and after all the talk of bears, what did we see? You guessed it – a bear! We were stopped in our tracks at the sight of a big, black bear about 20metres in front of us. The quality of the photo is indeed poor, but I wasn’t going to get any closer for the sake of more megapixels!

Copyright © 2014 by The Culture Map. This article was written by Shing Lin Yoong and originally published at theculturemap.com