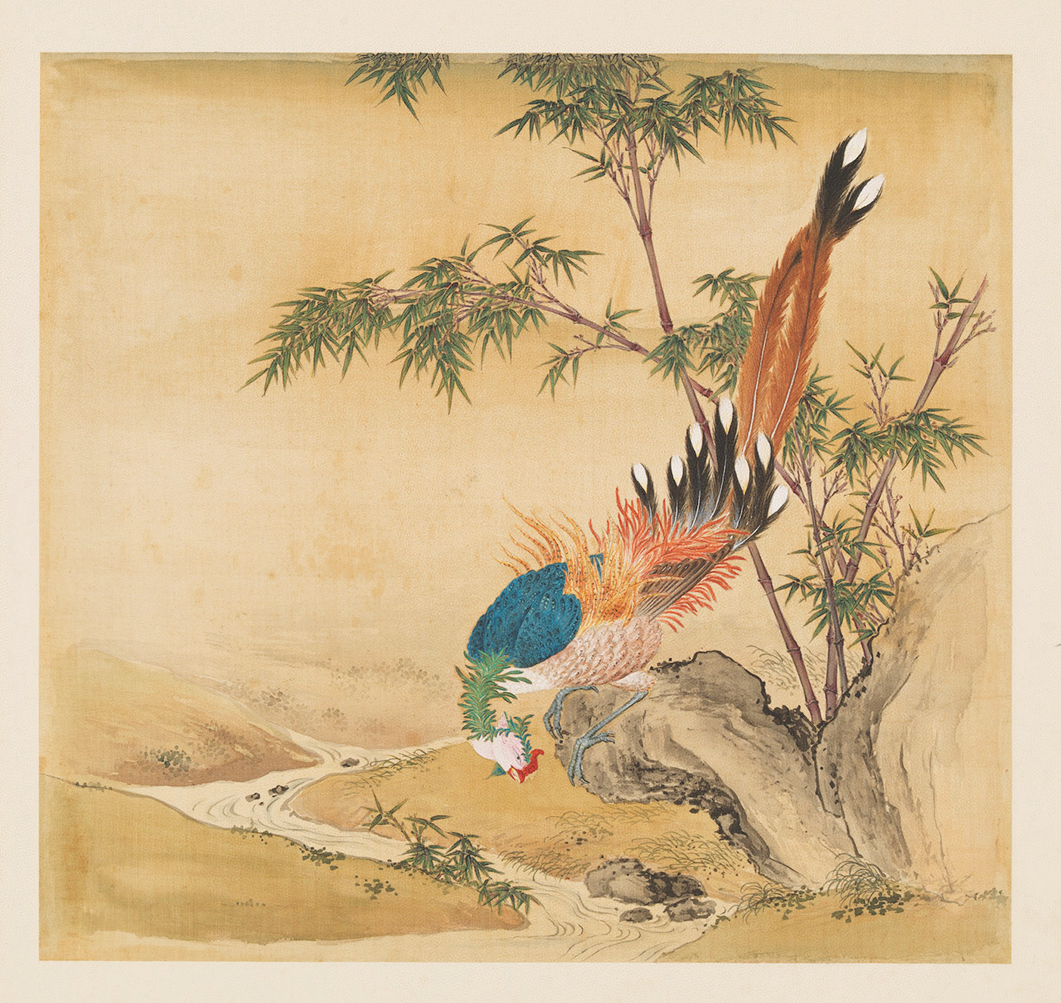 The luan is a mythological bird similar to the phoenix, both symbols of auspiciousness. (Courtesy of the National Palace Museum)
Arts & Tradition

In traditional Chinese culture, the following idioms are often used to describe a perfect marriage: lute and zither playing in harmony, flowers blooming under the full moon, dragons soaring and phoenixes prancing, mandarin ducks playing in water, and swallows and nightingales flying in pairs.

These metaphors are inspired by objects in nature, among which bird-related analogies are the most common.

Such admiration of the creatures dates back millennia, as birds were believed to herald good luck. Bird-and-flower paintings (hua niao hua) are one of the three major genres of Chinese painting, and chirping birds are typically used to convey the painter’s earnest wishes.

Noble Blessings From a Sacred Bird

The phoenix (fenghuang), a sacred bird from the ancient days regarded as the king of birds, is considered the noblest emblem for grand weddings. Married couples sharing in the ebb and flow of each other’s lives are compared to male and female phoenixes flying in blessed harmony.

In Shuowen Jiezi, an ancient Chinese dictionary from the Han dynasty, the phoenix is said to appear only in places blessed with utmost peace, auspiciousness, and fortune. According to the dictionary, the phoenix also has the breast of a goose, the back of a tiger, the neck of a snake, the tail of a fish, the grain of a dragon, the face of a swallow, and the beak of a rooster. Its body contains the five fundamental colors: white, black, red, green, and yellow.

According to the Writings of Huainan, Yu Jia is the name of the ancestor of all birds. Dragons were said to have given birth to phoenixes, and the phoenix (fenghuang) was used to symbolize both husband and wife, as male phoenixes were originally called feng and the females huang.

The luan is another mythological bird similar to the phoenix—red, flamboyant, and rooster-shaped. Both the phoenix and luan are totems of auspiciousness and are often seen in royal rituals, paintings, and accessories. No ordinary bird could compare with the appearances of phoenix and luan—their superiority is everlasting. Many believe that the image of the luan is derived from golden pheasants. Therefore, paintings with a pair of pheasants can also convey wedding wishes.

Till Death Do Us Part

Mandarin ducks (yuanyang) represent the unwavering faithfulness and commitment of married couples. Male ducks are called yuan, and the females yang—so together, they’re often used as a metaphor for wedded bliss. Mandarin ducks often swim and inhabit in pairs. Luo Yuan, a literati from the Song Dynasty, famously depicted that yuanyang would never leave one another, and upon being torn apart, they would die of grief.

The yuanyang was used by the literati as a symbol of inseparable couples, and it was widely used in many contexts—sadness, happiness, separations, and reunions. For instance, Lu Zhaolin, a poet in the Tang Dynasty, wrote in “Changan: Poem Written in an Antiquated Form,” that: “I would die without regret if we were flatfish swimming together, I wish to be mandarin ducks with you more so than immortals.” The poem expresses a man’s earnest wish to be with his love.

In the past, people would also catch and gift Mandarin ducks. Poems demonstrate that though the birds were met with danger in these instances, they would suffer together rather than abandon one another. As such, the birds are widely acknowledged as conveying blessings for the newly wedded—no matter what hardships the couple faces, they will get through them together. The unwavering character of yuanyang is frequently interpreted by poets, and its symbolic meanings have become irreplaceable.

Harbingers of Joy and Love

There are birds more commonly seen in our everyday lives, such as the swallows who often build nests under traditional roofs.

Swallows are small and often have a black back and a white throat, giving them the nickname “black cape” in Chinese. In traditional Chinese culture, swallows symbolize a home of joy and comfort. They can also be used to describe a loving and inseparable couple. In “Swallows Leaving in Pairs,” the poet Li Bai wrote about how people admired swallows for always flying in pairs, forever by their lover’s side. However, after their nest was burnt down, one female swallow was left alone without her partner. It was a heartbreaking sight, seeing the swallow now flying alone. This tragedy shows the swallows’ fidelity and commitment.

Magpies are another significant cultural symbol in China. In ancient times, grumpy magpies were actually considered auspicious—their chirping can bring good luck and fortune. This is why magpies are called “happy magpies” in China. Magpies are also seen as fairies. In the Song Dynasty, a man named Yuan Bowen dreamed about a fairy and asked her to stay during the night. The fairy replied to him: “I shall make a bridge for Zhinu during the day, staying would bring disgrace to my duty.” When Yuan woke up, the sun had risen and he saw a flock of magpies flying eastward, among which one flew away from his window.

Zhinu is the youngest daughter of the Jade Emperor, and magpies are also associated with the folktale of the weaver girl Zhinu and cowherd Niulang. When Zhinu came down to Earth, she fell in love with Niulang, a mortal cowherd, and the two got married. However, their love wasn’t allowed, and the Queen Mother of the West banished them to opposite sides of the Heavenly River (Milky Way). On the seventh day of the seventh lunar month, a flock of magpies would form a bridge, connecting the two lovers and allowing them to briefly reunite. Thus, magpies are seen as a type of Cupid that brings lovers together and are often used to signify marital bliss.

The symbols embodied by birds have been imagined and reimagined by literatus, inviting us to explore the previous cultural heritage hidden behind the chirping birds.