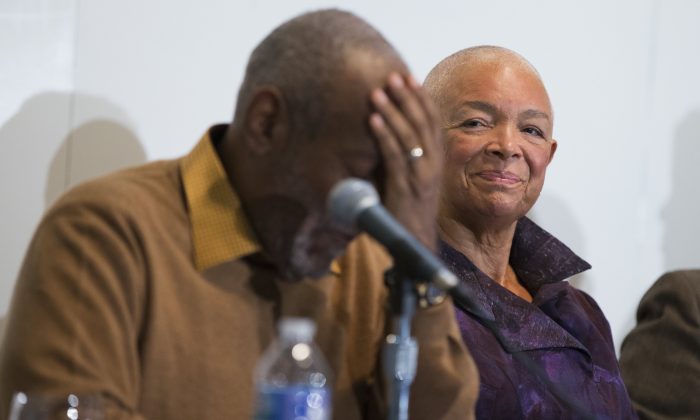 In this photo taken Nov. 6, 2014, Camille Cosby watches her husband Bill Cosby pause during a news conference about the upcoming exhibit, Conversations: African and African-American Artworks in Dialogue at the Smithsonian's National Museum of African Art in Washington. (AP Photo/Evan Vucci)
Arts & Culture

The inclusion of Bill Cosby work in the Smithsonian’s upcoming exhibit will now mention the sexual allegations against him after several of his accusers criticized the museum for not telling the whole story.

The NMAAHC, a Smithsonian museum whose doors will open in September 2016, aims to be a place where visitors “can learn about the richness and diversity of the African American experience, what it means to their lives and how it helped us shape this nation.”

My hope is that the names and accomplishments of these artists are not lost to history – http://t.co/Th3ScCWUmZ #Conversations

Allegations of sexual assault and rape against the 78-year-old Cosby—which now number near 50—that emerged in 2014 have tarnished the comedian’s long-standing positive reputation. Amidst a controversy that has divided many—and seems to be a long way away from any sort of closure—the Smithsonian has taken a definitive stance.

“Some people feel that the Smithsonian should eliminate all mention of Bill Cosby as a result of recent revelations. We understand but respectfully disagree,” said the statement, written by Lonnie G. Bunch III, the founding director of the NMAAHC.

Bunch notes that the exhibit does not “honor or celebrate” Cosby but acknowledges his role in American entertainment.

“For too long, aspects of African American history have been erased and undervalued, creating an incomplete interpretation of the American past,” Bunch stated.

“Like all of history, our interpretation of Bill Cosby is a work in progress, something that will continue to evolve as new evidence and insights come to the fore.”

“Visitors will leave the exhibition knowing more about Mr. Cosby’s impact on American entertainment, while recognizing that his legacy has been severely damaged by the recent accusations,” concludes Bunch.

The Smithsonian ended an exhibition sponsored by and containing artworks owned by Cosby and his wife Camille, despite previous plans to keep the exhibit open.

“Taking the Stage” is due to open on Sept. 24 and will last indefinitely.