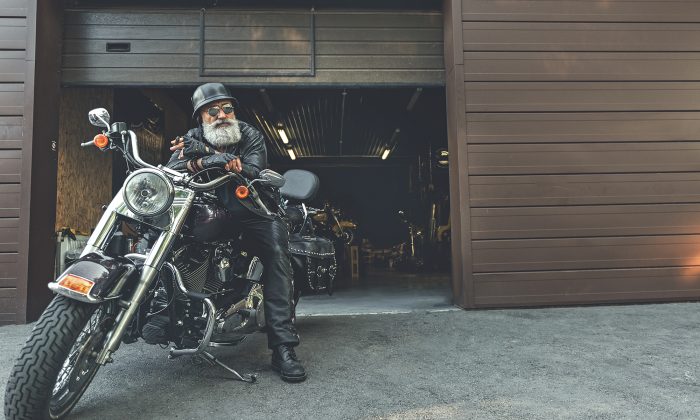 Grandfather Jeff Harville, of Claiborne County, Tennessee, looks tough on the outside. His Facebook page tells the story of someone who loves motorcycles, sports a grizzly beard, and spends his weekends cheering in front of the TV with the football game on.

When his granddaughter needed his help, though, he showed that if you love someone enough, you’re willing to do anything—even if that means stepping outside your comfort zone. And if that means dancing with pompoms like a girl cheerleader, so be it!

Anything for his dear granddaughter.

Harville went viral online this March when a video of him dancing at his granddaughter’s cheer recital hit the worldwide web, proving that there’s nothing manlier than helping out someone you love—no matter what it is that you’re helping with.

The video shows his granddaughter, 4-year-old McKinly Lester, getting ready to go in front of the whole gymnasium with the rest of her friends at her cheer recital.

Just before she’s set to go on, though, the adorable little girl gets hit with a performer’s worst nightmare—a serious bout of stage fright.

“Mommy, I want Papaw to dance with me!” her mom recalled her whispering, hesitating to go out and perform on her own.

Harville doesn’t necessarily look like the kind of person you’d expect to be prepared to get up and dance in a cheerleading recital, surrounded by 4-year-old girls waving pompoms and moving to the rhythm.

He doesn’t even hesitate, though; taking off his hat, he stands up and goes out to the center of the floor. He takes his position next to McKinly, and before you know it, he’s shaking his groove thing for the cameras!

The pair go through the chicken dance with a laugh, and Harville does his best to stay with the beat—smiling the whole time while McKinly’s confidence visibly grows next to him. Before long, the performance is over, no tears needed!

Harville wasn’t the only adult who had to head up and guide the little cheerleaders in order to soothe some nerves, but he stood out as the only one who didn’t look like a mom or grandmother who already knew what was going on. It’s the perfect example of how there’s no limitation on who can help out when a kid needs a little boost of confidence—and how there’s no limitation to what can provide a little bit of extra fun.

“This is hilarious but also so sweet,” one person commented, while another pointed out that it was going to be the kind of memory that would last a lifetime for both little McKinly and Harville. And according to her mom, Chelsey Lester, it meant more than just a quick way to combat nerves for the young girl.

“Her papaw means a lot to her,” Chelsey said, speaking about the hilarious video to WFMY News 2. “She is a papaw’s girl! This is something she will never forget as a child. Her papaw dancing with her.”

Chances are, it’s something that the rest of us won’t forget any time soon, either!