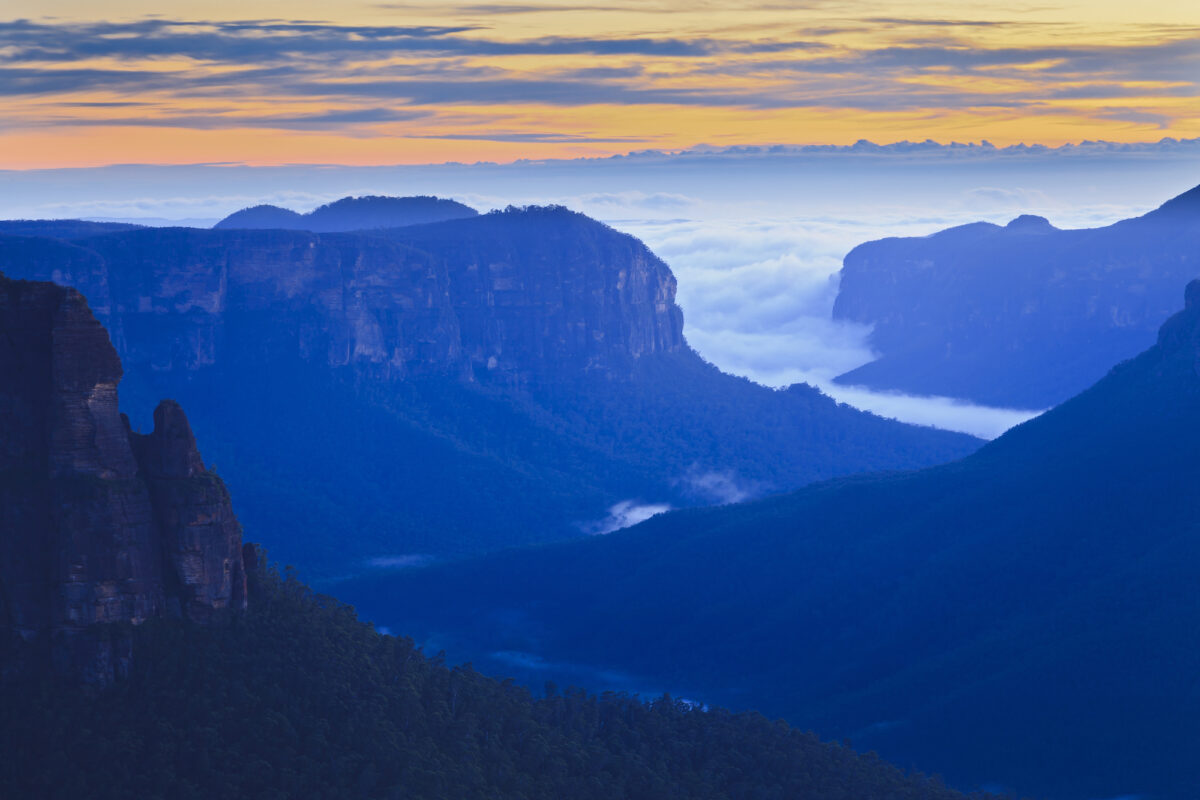 Big Blues: Heading to the Mountains in Australia

The train wound into a serpentine gully, the small stations feeling increasingly remote and old-fashioned, as if time and distance were interlinked. Leaving Sydney’s busy Central Station just a couple hours ago made this feel like a commuter trip. The silver double-decker train slipped past the gleaming skyscrapers of the Central Business District, which slowly gave way to the suburbs—leafy blocks of single-family homes, often with a busy pub on the corner.

But then it felt like we’d almost reached the clouds. Ridership thinned as the last of the city workers disembarked, leaving just a fortunate few of us to snake higher and higher into the Blue Mountains. While the windows of the carriage mostly faced out onto forest and rock walls, every so often a vista flashed into view. The horizon dropped away to forever, revealing bluish-green ridge lines as far the eye could see.

Arriving in the Mountains

I was just west of Australia’s largest city to spend a few days in the Blue Mountains, a little more than two hours away by train. Covering roughly 4,000 square miles, this collection of sandstone peaks and valleys stretches to a height of more than 3,500 feet—not nearly as high as the Alps or the Rockies, but still a steep climb from Sydney.

A UNESCO World Heritage Site, the area has developed into a popular weekend getaway spot for Sydneysiders. With its trademark blue haze beckoning, it’s a fascinating place to explore.

The Blue Mountains are part of the Great Dividing Range, the world’s longest land-based mountain chain contained within a single country. They were once covered with a shallow sea and rivers carrying sand, with the mountains carved and rising after that.

Home to Aboriginal people for millennia, the area is now home to fewer than 100,000 people, as well as plenty of koalas, parrots, and cockatoos. Most of the mountain towns surround a charming 19th-century main street. There are plenty of wonders to explore, including an underground cave filled with glowworms (which I didn’t have time to see, this time around).

I disembarked at Blackheath, the second-last station on the Blue Mountains Line. It ascends through a narrow valley, each stop just around the corner from the last. The town of fewer than 5,000 sits near the highest point in the mountain range near Govetts Leap lookout in Blue Mountains National Park.

I started my adventures here ambling around the shops and cafés, spending time in an antique store selling vintage posters and other fun finds. Then I explored a couple of shops offering farm-fresh meats and cheeses sourced nearby.

I finally settled down for a hearty lunch of chicken parmesan, heaped with cheese and bacon on top of thick-cut fries at Gardners Inn. A plaque states this has long been a favorite watering hole, since 1830, when it was built as the Scotch Thistle Inn. A friendly, small-town atmosphere pervades, with both the server and a patron taking interest in my lack of an Aussie accent and taking the time to chat.

I rode the rails up and down the valley, spending a couple of pleasant afternoons in Katoomba, the area’s largest town. It was once known as the “Honeymoon Capital of Australia.” Tourists have flocked here since 1882, when the opulent Carrington Hotel opened. It’s still a busy place on weekends and in the summer. Visitors stroll the downtown, which spreads across two broad hills. Some of the shop fronts—secondhand bookshops and old-school news agents—date back more than 100 years.

The entirety of it is listed and preserved as a national heritage conservation zone. It’s also an excellent place for a bite. There’s the falafel place Cedar, a local favorite where, rumor has it, the owner once served as chef for the Rolling Stones; and the Station Café, where you can grab a wood-fired pizza steps from the tracks.

Scenic World, a theme park embedded in the natural attractions, claims the world’s steepest passenger train. I rode the train, which has been wowing visitors since 1945. Originally part of a coal mining operation, the rails descend at a grade of 52 degrees, or 128 percent. The feeling is akin to plunging directly off a cliff. The tracks drop almost vertically, like a slow-motion version of a roller coaster’s initial drop that takes your breath away.

Climbing out of the glass-encased car onto a platform in the Jamison Valley, I saw them: the Three Sisters.

The icon of these mountains draws millions of visitors in a typical year. The three distinct formations, sandstone honed by so many years of wind and rain, rose above me.

More wonders followed, tracing a path through the eucalyptus forest, then riding the Scenic Skyway, a cable car with a glass bottom that crosses almost 900 feet over the valley below.

Too soon, I’m headed back to the city on the Blue Mountains Line. Dropping back into the urban streets of Sydney, the Blues feel far away, almost in an instant. A hidden world of blue haze and sandstone ridges.

So close—now, so far. I’ll be back, sooner rather than later. A whole cave of glowworms awaits.

Fly: Sydney Kingsford Smith International Airport (SYD) is Australia’s largest and busiest hub, connecting the city with major cities around the world, on both Qantas Airways, the national flag-bearer, and major carriers like Air Canada (to Vancouver) and Delta Air Lines (Los Angeles).

Getting Around: While the train provides excellent service to the towns along the line, a rental car is recommended if you’re looking to explore beyond, as ride-share services are generally unavailable and taxis can take a while to pick up. You’re best to rent in Sydney, although it’s possible to do so in Katoomba.

Stay: Blackheath’s Kyah Boutique Hotel, once an aging 1970s motel, has been fully renovated and reimagined in Palm Springs style with Instagram-friendly accommodations. Rooms are both comfortable and chic, and the hotel includes a pool, tennis court, a crackling fireplace for those chilly mountain evenings, and Blaq, an upscale, innovative restaurant with a seasonal, hyper-local menu.

Take Note: If you’re looking to stretch your legs, anyone from recreational walkers to avid hikers can find their trail. Consult VisitNSW.com/destinations/blue-mountains/bushwalking to locate your best path.