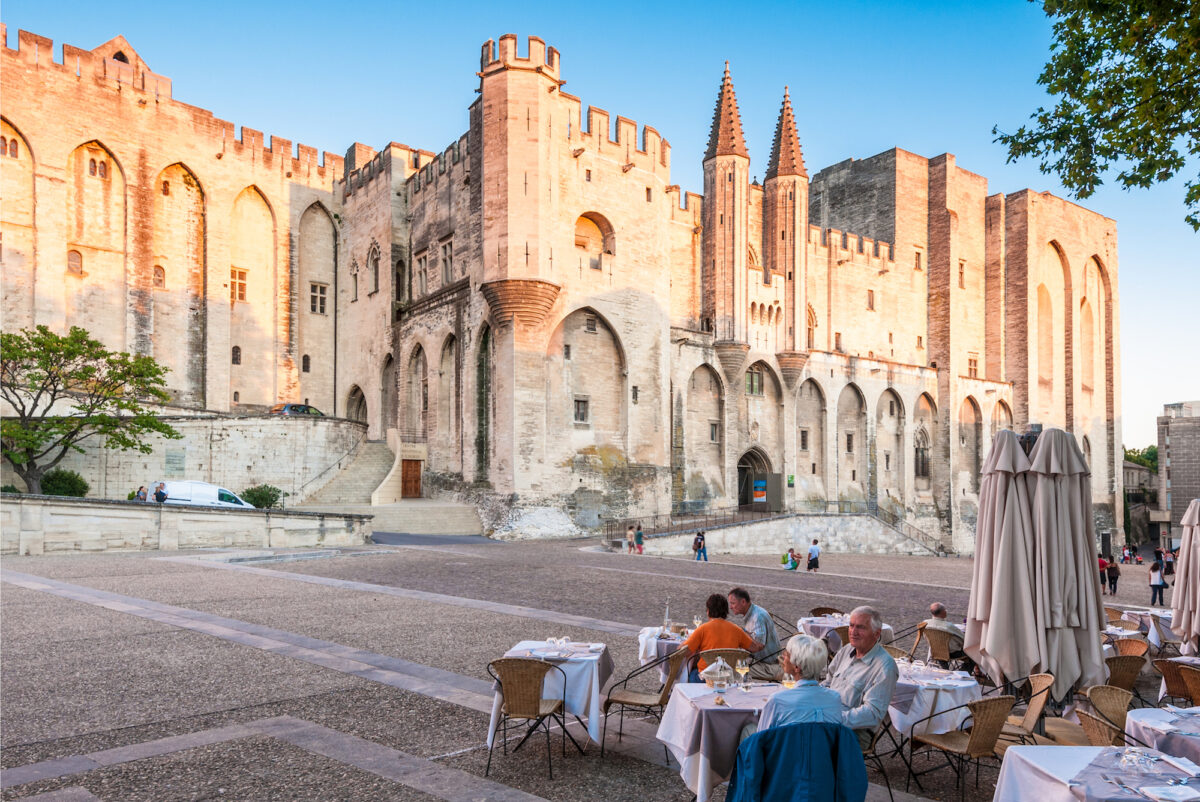 Beyond the Beach in the South of France: Diving Into Avignon and Marseille

Nestled into wooded hills on the broad curves of the Rhône River, Avignon is a pleasant little city that’s great for strolling down cobblestone streets enclosed by medieval walls. Today, it’s home to fewer than 100,000 people, though it was once the absolute center of the universe for a large portion of the Western world. The greatest testament to that legacy of political and religious power still stands in the heart of town.

“This is still the largest Gothic palace in Europe,” a guide said as I took in the grandeur and sheer size of the Palais des Papes, which is more than 160,000 square feet in total, although only a third of it is open to the public.

Here, the Catholic Church held six papal conclaves, the grand gathering where the Church’s leadership elevates its new pope from among its ranks. These buildings were home to seven popes and served as the seat of Western Christianity for much of the 14th century.

“It was temporary, at first,” the guide said. “They really didn’t expect to be here for 70 years.”

Now a UNESCO World Heritage Site, the Palais des Papes is just one of the architectural and historical marvels that dot southern France.

When most people picture Provence and the Côte D’Azur, they conjure up images of white sand and aquamarine waters, beach chairs, and Brigitte Bardot. But it’s a perfect place to go deep into the past, where thousands of years of history along the Mediterranean Sea blend with a vibrant contemporary culture.

The story of the Palace of the Popes and the Avignon Papacy is complicated, rooted in a conflict between the Vatican and the French crown that pushed Pope Clement V to move his administration from Rome to this former bishop’s palace in 1309. Even more confusing, after Pope Gregory XI moved his administration back to Rome in 1377, a schism ensued from 1378 until 1417, with rival papacies in Rome and Avignon (at one point, three men all claimed to be the legitimate leader of the Church).

But while it was certainly a mess in leadership and logistics, this wild period left behind a magnificent building—the largest Gothic structure of the Middle Ages—created by the continent’s finest architects and designers.

Approaching from the outside, the battlements, archways, and towers soar, the latter as high as 170 feet. Construction took place in two different phases, commencing the construction of the Old Palace in 1252 and doing so for the New Palace in 1334.

The rooms inside seem impossibly huge, including Consistory Hall, where the pope assembled his cardinals to discuss and decide upon political and judicial matters. The frescoes in the Chapel of St. Jean provide just a taste of the color and intricacy of the artwork that once covered all of the surfaces in this place.

“It’s like a small Sistine Chapel,” the guide said. “These were true masters.”

Of course, there’s more to see in Provence than Avignon, including France’s second-largest city. Hopping on the super-fast TGV train, I shot south toward the sea, as small villages cradled into valleys passed by in a flash through the window. I disembarked at Marseille less than 30 minutes later.

Perhaps no other place impresses so quickly.

Just two steps outside the hilltop Gare Saint Charles station, the city spreads out before you. Dense clusters of buildings rise all around the unmistakable eminence of Notre-Dame de la Garde. Known to locals as Bonne Mère, or the “Good Mother,” the basilica crowns a 500-foot limestone outcrop, dominating the skyline and overlooking it all.

I descended to the sea and walked along the waterfront. The Old Port has been in the middle of the action since Ionian Greeks set up a trading post there in 600 B.C. It was home to Roman and Medieval settlements, and King Louis XIV built twin forts—St. Jean and St. Nicolas—to guard its entrance. By the middle of the 19th century, thousands of ships were passing through each month.

Now, with the main commercial activity moved to a nearby industrial port, Marseille still gathers at the Old Port. The harbor is filled with sailboats and super-yachts. Many of the neighboring streets are pedestrianized and lined with sidewalk cafes.

As I walked around, I found a classic French fish market adjacent to the Grande Roue, a Ferris wheel that rises 180 feet in the air along the water. Walking down one side of the harbor, I passed the city’s main cathedral—the shockingly huge Nouvelle Major, one of the largest churches in France. Mixing Byzantine and Roman Revival styles, there’s enough room inside to seat 3,000 people comfortably.

There was so much left to explore, in this city and beyond. As I looked out, the sea shimmered, and the waves lapped far below. Head up the coast or down, and you’ll find a good place for a swim—but there, on a sunny afternoon in the south of France with so much to do and see, I hadn’t even thought about the beach.

Fly In: Several airlines fly direct to Marseille Provence Airport from European capitals, including KLM, TAP, and Lufthansa. If you’re coming from the United States, you’ll connect either there or in Paris.

Getting Around: Several trains a day connect Avignon and Marseille, including TGV trains, which travel up to 200 miles per hour. Marseille also has an extensive, easy-to-navigate public transit network, which includes a two-line metro system.

Stay: Sofitel Marseille Vieux Port offers posh, five-star accommodations and some of the best views in the city from Dantès Skylounge.

Take Note: When in Avignon, make sure to reserve a little time to walk around the old town, which is encircled by medieval walls, and along the banks of the Rhône. And pop into the Musée du Petit Palais, which has an art collection that includes paintings and sculptures from the Middle Ages and the Renaissance.