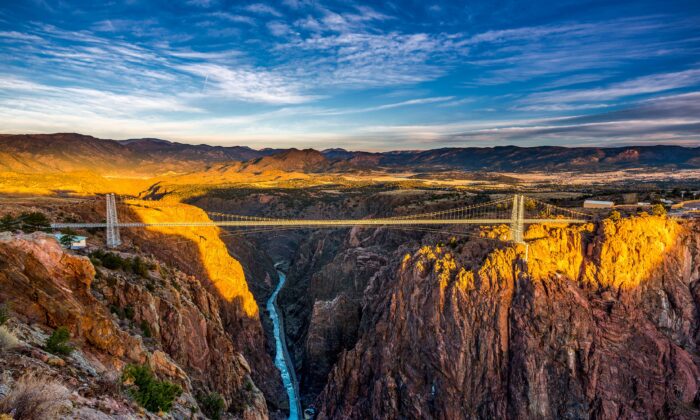 Beyond the Bars in Cañon City, Colorado

Quite a few out-of-towners spend time in Cañon City, but not for the right reasons.

While this smallish city in south-central Colorado is within driving distance of fast-growing Colorado Springs and the former steel city of Pueblo, it is hardly a bedroom community for commuters.

Instead, many of those living here are behind bars in the 11 prisons spread across Fremont County, which takes its name from the legendary 19th-century soldier, explorer, and politician John C. Fremont. One of the most infamous inmates, Joaquin Guzman, better known as the Mexican drug lord El Chapo, is locked up at the federal supermax prison.

Those coming to Cañon City for something other than a spell in the penitentiaries often do so for the Royal Gorge Route Railroad.

The heritage line operates as many as four daily sightseeing trains along tracks first laid in the 1870s through the breathtakingly beautiful Royal Gorge, where granite cliffs soar a thousand feet above the Arkansas River. On weekends, a three-course dinner train runs with first-class seats in vintage cars.

A few miles west of town, roughly parallel with U.S. Highway 50, is the gorge. While the county bears the name of Fremont, the first white man to see what some today call the Grand Canyon of Colorado was Zebulon Pike in 1806.

Of course, Pike and Fremont wouldn’t have seen the pedestrian bridge—somewhat uncreatively named Royal Gorge Bridge—that has spanned the cliffs since 1929 and was for several decades in the record books as the world’s highest bridge. Numerous roadside attractions are also located here, including zip lines.

Back downtown, Cañon City feels like one of Colorado’s best-kept secrets—the kind of place that will be dramatically different in just a few years.

Revitalization is underway, starting with the landmark Hotel St. Cloud. The Second Empire-inspired building, rebuilt at its present location around 1887 after being dismantled and transported brick-by-brick from a silver mining town some 50 miles away, is slowly undergoing redevelopment. Around the corner is the stately former post office with the kind of architecture that nobody designs anymore. Today, it houses an arts center.

And then there’s the wine, which complements the apple orchards and cideries found in the Arkansas River Valley to the east of town.

The Winery at Holy Cross Abbey was established years ago on the grounds of a now-closed Benedictine monastery. Between the Gothic revival chapel, listed on the National Register of Historic Places, and the long history of monks making wine, the setting feels almost medieval.

Under the ownership of Larry Oddo these days, a broad range of wine is produced using grapes grown mostly in the Grand Valley AVA, a Colorado appellation. Among the reds are a 2018 reserve cabernet sauvignon, 2019 syrah, and 2017 cabernet franc. For whites, their latest vintage viognier, a 2019, is a change of pace from the more usual chardonnay.

Another member of Fremont County’s very fledgling wine scene is Legatum Cellars. In addition to more common varietals, their bottlings include a 2016 vintage tempranillo and an albariño from 2017. The two ancient grapes—red tempranillo and white albariño—from the Iberian Peninsula have done very well in the Colorado climate.

The Winery at Holy Cross Abbey (AbbeyWinery.com) is open Monday through Saturday from 10 a.m. to 6 p.m., and Sunday 12 p.m. to 5 p.m. The annual Harvest Festival featuring wine and local food takes place Sept. 25 and 26.

At Legatum Cellars (LegatumCellars.com), tastings are available from 12 p.m. to 5 p.m. every Saturday.

The Museum of Colorado Prisons (PrisonMuseum.org) occupies a former women’s prison next to the castle-looking Territorial Correctional Facility, Colorado’s first prison. Operating hours through Oct. 1 are 10 a.m. to 6 p.m. daily.

Tickets are required to visit the Royal Gorge Bridge and its associated attractions (RoyalGorgeBridge.com). Hours vary by season.

The Royal Gorge Route Railroad (RoyalGorgeRoute.com) dinner train departs at 6:30 p.m. Saturday and Sunday through the end of October. Tickets from $149 per person.

Getting to Cañon City requires a car. The closest airport with commercial service is in Pueblo, although the airports in Colorado Springs and Denver have significantly more flights.