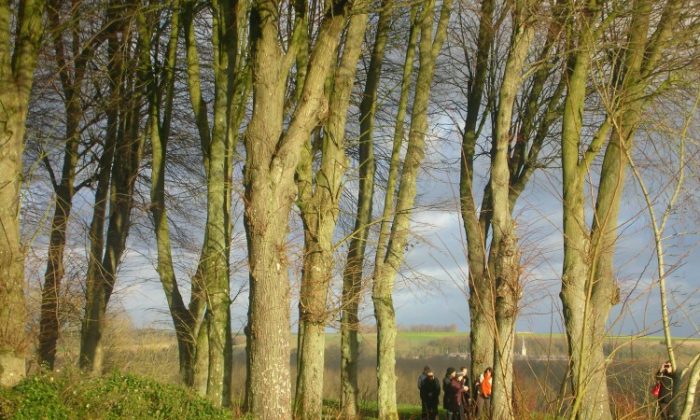 Looking out toward the chalky cliffs of Dover across the English Channel from La Sirene Restaurant at Cap Gris Nez. (Beverly Mann)
Travel

Beyond Paris: Through the Eyes of Lens and Pas-de-Calais

You don’t have to go to Paris to see the Louvre’s greatest works. I wandered through centuries marveling the masterpieces of Da Vinci, Michelangelo, Delacroix, Raphael, and 18th century Islamic artists, all while viewing a country landscape revealed through a massive glass interior. I was encased in the new Louvre-Lens Musée in the former coal-mining town of Lens, situated just a little over an hour by high-speed train from Paris at the crossroads of Europe—bordering Belgium and Great Britain via the English Channel.

Lens has been scarred by two world wars but has now added a new life and cultural spirit to France’s Nord-Pas-de-Calais region. This new regional museum, which opened free to the public mid-December 2012, showcases 205 Louvre masterpieces for a permanent exhibition running five years, along with temporary exhibits from neighboring museums. Works range from antiquity to Middle Ages and modern art.

Located on 50 acres that was once a major coalmine, the Louvre-Lens building is the creation of Japanese architects from SANAA, Kazuyo Sejima, and Ryue Nishizawa, in collaboration with American firm Imrey Culbert. Their concept was to build a structure that was easily accessible and would integrate well into the site without an imposing presence. It would supposedly attract a half a million visitors a year to this once distressed mining town.

From all aspects, the Louvre-Lens is another Louvre but casts a different light on the collection of this major national museum within three major galleries. The Gallery of Time will exhibit only works from the Louvre’s collections. In the Glass Pavilion, national collections dialogue with those of regional museums. The Temporary Gallery will showcase two major exhibits a year.

Xavier Dectot, Director of Lens-Louvre, emphasized to me when we spoke recently that, “We want to maintain the dignity of the Louvre while maintaining the area’s sense of history and an openness in every sense of the word—from the glass and steel exhibition space and exterior environment to its social and political climate.”

In addition, the Grande Galerie will abandon the traditional structure of departmentalization, with works exhibited in a single, huge gallery with no separating partitions. Visitors can walk through and around the art.

Henri Loyrette, Director of Paris’s Louvre, states, “Lens will be a laboratory for the Louvre, a more universal, accessible museum incorporating performing arts events. Even restoration works will be in public view.”

Also, the Louvre-Lens is quite different from the new Pompidou Museum built in the popular medieval town of Metz south of Paris, which is contemporary and deals only with temporary exhibitions. The Louvre-Lens has permanent collections, emphasizing classical works spanning centuries.

The opening of this impressive museum in Lens is just another example of the changing face of the Pas-de-Calais region in the past 15 years—from coal mining and textile towns to culturally savvy cities. The area has been an inspiration to many a writer and painter for centuries. Victor Hugo received his inspiration for “Les Miserables” in the coastal town of Montreuil-sur-Mer, as well as painter Henri Matisse, who was born in the southern part of Le Cateau-Cambrésis. Not far, is the Musée Matisse in the neighboring city of Cambrai.

Just a 45-minute TVG train ride from Paris and 20 minutes from Lens, Arras will, in the next decade, have its Fine Arts Museum form part of the largest combined arts complex of its kind north of Paris.

After visiting Lens for the museum opening, I then continued to Arras with its UNESCO World Heritage town square appearing like an outdoor museum itself. Here, I viewed some of its 155 facades and arched gables of Flemish baroque style. Nord-Pas-de-Calais is also known for its bevy of belfries.

For a birds-eye view of the city, I attempted the walk up the spiraling 133 stairs of the gothic-style belfry attached to the more renaissance Town Hall. From this vantage point, the entire square is aglow like a Christmas postcard during the month of December.

Dubbed the city of 80 poets and the cradle of a thriving theater and creativity in the Middle Ages, Arras is no stranger to both the performing and visual arts. The Arras Musée des Beaux-Arts housed in the two-century-year-old Benedictine St. Vaast Abbey features everything from Dutch paintings to 18th century ceramics and a relief map from 1716.

However, it is the recent arrival of the grand carriages and collections of Chateau de Versailles that has caused the greatest buzz. This is the first exhibit in France devoted to carriages of kings, and the first time that the royal Berlin coaches of the Musée des carrosses de Versailles have been sent out on loan. This show represents the first in a series of exhibitions based upon a 10-year collaboration between Versailles, Arras, and the Nord-Pas-de-Calais region.

Before I left the city, I gave myself the royal treatment. I spent the night at the Hotel Univers and indulged in a gastronomic feast at the hotel’s Le Clusius Restaurant.

As intriguing Arras appears above the ground, there lies a 12-mile underground network of tunnels at the Wellington Quarry where 24,000 soldiers, mostly British, hid for eight days before a surprise attack on the Germans in April 1917. This was well worth the visit.

Just north of Arras, and less than an hour train ride, is the storybook town of Bethune with another UNESCO listed belfry. Bethune, like Arras, was 90% destroyed from the throes of WWI but rebuilt in the 1920s. It was the regional capital of culture in 2011. A few hours stroll around the town gave me just enough time to entrench myself in its historic flavor and eclectic architecture from gothic to art deco.

The highlight of this visit was my overnight just 15 minutes away at a hidden find in the little village of Gosnay at Hotel La Chartreuse du Val St. Esprit. Once a 14th century cloister rebuilt again in the 17th century, this charming hotel is more like a lavish Victorian B&B, very homey but elegant. Best of all, it was reasonably priced for its comfort and quality fare. The fresh array of cheeses and house-made pastries made breakfast quite memorable.

The following morning, I arrived in the seaside resort of Le Touquet-Paris-Plage with a stay at the legendary 1930s-style Westminster Hotel & Spa, nestled between sea and forest. It also boasts the Michelin-starred, gastronomic Le Pavillon Restaurant. Each dish was artfully prepared. I stopped to view the gallery of celebrity guest photos lining the walls just outside the restaurant—from Churchill and Marlene Dietrich, to Sean Connery, and Tony Blair.

The next morning, I was taken for a coastal drive for less than two hours to Cap Blanc-Nez for a delectable fresh fish lunch and scrumptious mousse dessert at La Sirene Restaurant, a family-run establishment for more than 45 years. The prize view is peering out at the chalky cliffs of Dover across the channel.

The final stop was in the major coastal town of Calais, before taking the train back to Paris. I visited the Center for Lace and Fashion. The multi-level museum documents the city’s extensive lace-making history spanning several hundred years, with antique costumes and original machinery actually functioning for visitors. I was enthralled watching a worker manually organizing the hundreds of bobbin plates to be used in one of the antique machines on view.

Back in Paris, I was overnight at the hip and eclectic W Hotel, across from the magnificent Opera House and walking distance from the grand Louvre.

This was a stark reminder of my recent visit to Lens and Pas-de-Calais—where the arts are flourishing even beyond Paris.