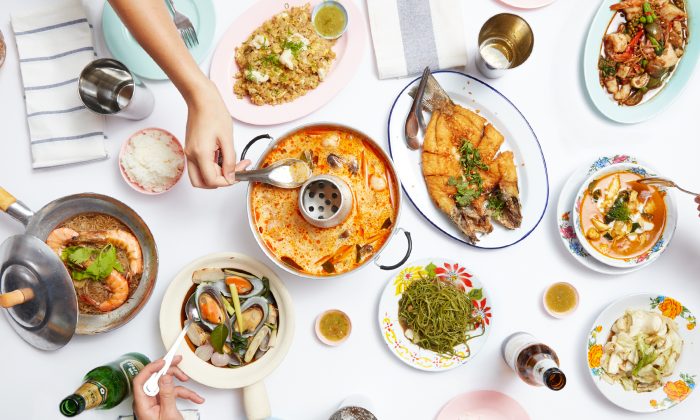 When Dad is the best cook in the family, it sure is a good idea to put his recipe on the menu.

At Fish Cheeks in SoHo, brothers Chat and Ohm Suansilphong celebrate the dishes they grew up eating in Thailand. Noi’s Fried Chicken is named after their father, who owned a restaurant in Thailand and taught them how to cook from the time they were 7 years old. The chicken pieces are crackling crisp after a double deep-frying treatment. A seasoning of lemongrass, garlic, cilantro, white pepper, and soy sauce, coupled with a generous pile of fried shallots on top, make them especially moreish ($12).

Chat, who came to the United States to study at the Culinary Institute of America and later worked at Colicchio & Sons, said he and his brother opened Fish Cheeks so people could be introduced to Thai cuisine beyond the typical pad Thai. “We wanted to do something different, food that Thai people would eat,” he said. The restaurant’s brightly colored furnishings and compact, yet comfortable environs add to the easy-going atmosphere.

The Suansilphong brothers hail from central Thailand, which had its own regional variations on comfort food dishes commonly found throughout the country, Chat explained. “Everywhere would have its own recipe,” he said.

Given the variety of dishes at Fish Cheeks, it’s wise to order a sampler “chef’s selection” set, which includes six to seven dishes shared between two diners ($90 to $135).

The brothers demonstrate that Thai dishes are more than just spiciness. Despite the presence of bird’s eye chili in the Tom Yum Pla, the seafood soup is boldly piquant and salty, with the herbaceous flavors of galangal, lemongrass, and kaffir lime leaves humming underneath ($22).

Goong Aob Woon Senn is a noodle dish with no hint of heat, just sweet-savory notes of soy sauce, lemongrass broth, Chinese cooking wine, sugar, and garlic ($18). The noodles and baked shrimp arrive in a clay pot, with an accompanying dipping sauce so crowd-pleasing, the restaurant has plans to bottle and sell it. Like a Thai version of salsa verde, the sauce blends cilantro, lime juice, garlic, bird’s eye chili, and fish sauce. It brightens up whatever it touches.

When the chefs do employ the heat, they don’t pull punches. The Coconut Crab Curry is a dish from the southern region, where seafood reigns ($22). Their homemade curry paste is made into a soupy dish best eaten with a bowl of rice. It overcomes your whole mouth with an electrifying heat, a fierce spiciness with bitter notes. Even a cold beverage will do little to quash the throbbing pain, but that’s part of the fun.