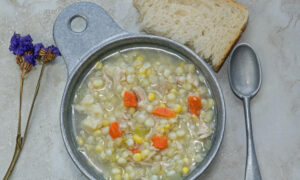 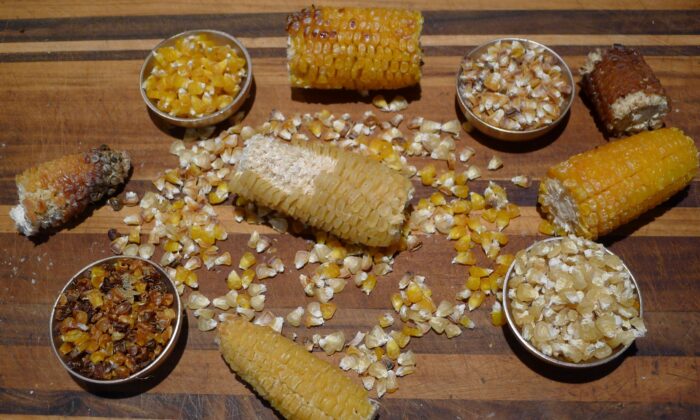 The only ingredient for chicos is corn—preferably with the husk on—and each batch will have a unique character, depending on the corn and how long it's roasted. (Ari LeVaux)
Recipes

Halloween, more than almost any other holiday, is about fun. It’s like New Year’s, but with corn syrup instead of booze.

It began with the Gaelic festival Samhain, which celebrated the end of harvest while ushering in the dark half of the year. Autumn was a spooky time, when the boundaries between the living and spirit worlds were thought to become more porous.

Brought to America by Irish and Scottish settlers, Halloween found footholds in the southern colonies, and developed a more playful, mischievous, and decidedly corny vibe.

The Rise of Corn

Candy corn didn’t start out as a Halloween treat, but jumped on the bandwagon in the 1950s, as Halloween pivoted into a full embrace of processed sugar.

Corn officially became spooky with the release of “Children of the Corn,” a 1984 movie about a midwestern village where the kids took over and decided nobody was permitted to age beyond 17. In 1993, the world’s first for-profit corn maze was built in Annville, Pennsylvania. Since then, the tradition has taken off, and corn mazes—aka maizes—now number in the thousands.

When I lived in New Mexico, I learned about chicos, a type of Native American dried corn. “Chicos” means “little boys” in Spanish, as the kernels shrink when dried.

The ones for sale at the store were dried to the hardness of popcorn, but when I make them at home, I let them stay a bit chewy, like real-life versions of candy corn. But nuttier and corny-er. Each batch of chicos has a unique character, with different levels of brown, crunchiness, chewiness, and/or sweetness, depending on the corn and how long it’s roasted.

Many Halloween corn mazes are closed this year, thanks to the virus. And door-to-door candy-begging is largely out, too. If treat-seekers are left to their own devices, I’m fine with that, because processed sugar is poison, and a tradition that hinges on giving candy to kids isn’t worth rescuing.

Luckily, nothing about the original spirit of Halloween demands candy. Spookiness, on the other hand, is in Halloween’s DNA, as is my right to dress like Bootsy Collins. And corn? It’s to Halloween like frost is to a pumpkin. A sign of the times. The inevitability of progress.

So allow me to tell you how I make chicos. I made about three dozen ears’ worth, which won’t last too long but is a nice stash. I’ll follow my chicos tips with a few recipes, one sweet and one savory, for how I used them.

How to Make Chicos

The only ingredient is corn, preferably with the husk on. Traditionally, the process involves a clay oven or “horno,” but other ovens work too. Ultimately you’re doing little more than drying out corn.

Although usually made with fresh corn, I’ve also made chicos with frozen corn, and the operation was surprisingly successful, even if the product lacked the soulful smoky flavor that a roasted corn husk imparts.

Turn the oven to 300 degrees F and place the ears directly on the oven racks, not touching one another, and bake until the husks start to dry out and brown and even smoke a little—about three hours. When cool, peel off the husks. If using husked or frozen corn, skip this step.

Put the cobs on the oven racks, spaced so as not to touch one another, and bake at 225 degrees F, until the kernels start to shrink and visibly dry out—about four hours. Let the ears cool completely, and rub off the kernels—try the edge of a spoon if they’re stubborn. Store in a plastic bag in a cool, dry place. The drier you get them, the longer they’ll store.

If making chicos from frozen corn, spread the kernels on a cookie sheet and bake at 225. They’ll take less time—about two hours—and will quickly turn brown and then black.

Fill a bowl with chicos and milk, with sugar to taste. It might taste familiar. When the chicos are gone and you sip the sweet milk that remains, you may feel a distinct déjà vu to a time, long ago, when you sipped the sweet leftover milk from a bowl of corn flakes.

A handful of chicos turns a pot of beans into something interesting and delightful. Served alongside rice, you’ve got a delicious meal with complete protein.

Fry the bacon on medium heat. When half-crispy, after about five minutes, add the onions, garlic, and herbs. Fry until the onions become translucent. Add the beans with their liquid, and the water or stock, and stir together. Add the paprika and season with salt, if necessary. Heat to a simmer, stirring as necessary to prevent sticking. Adjust seasoning and serve.