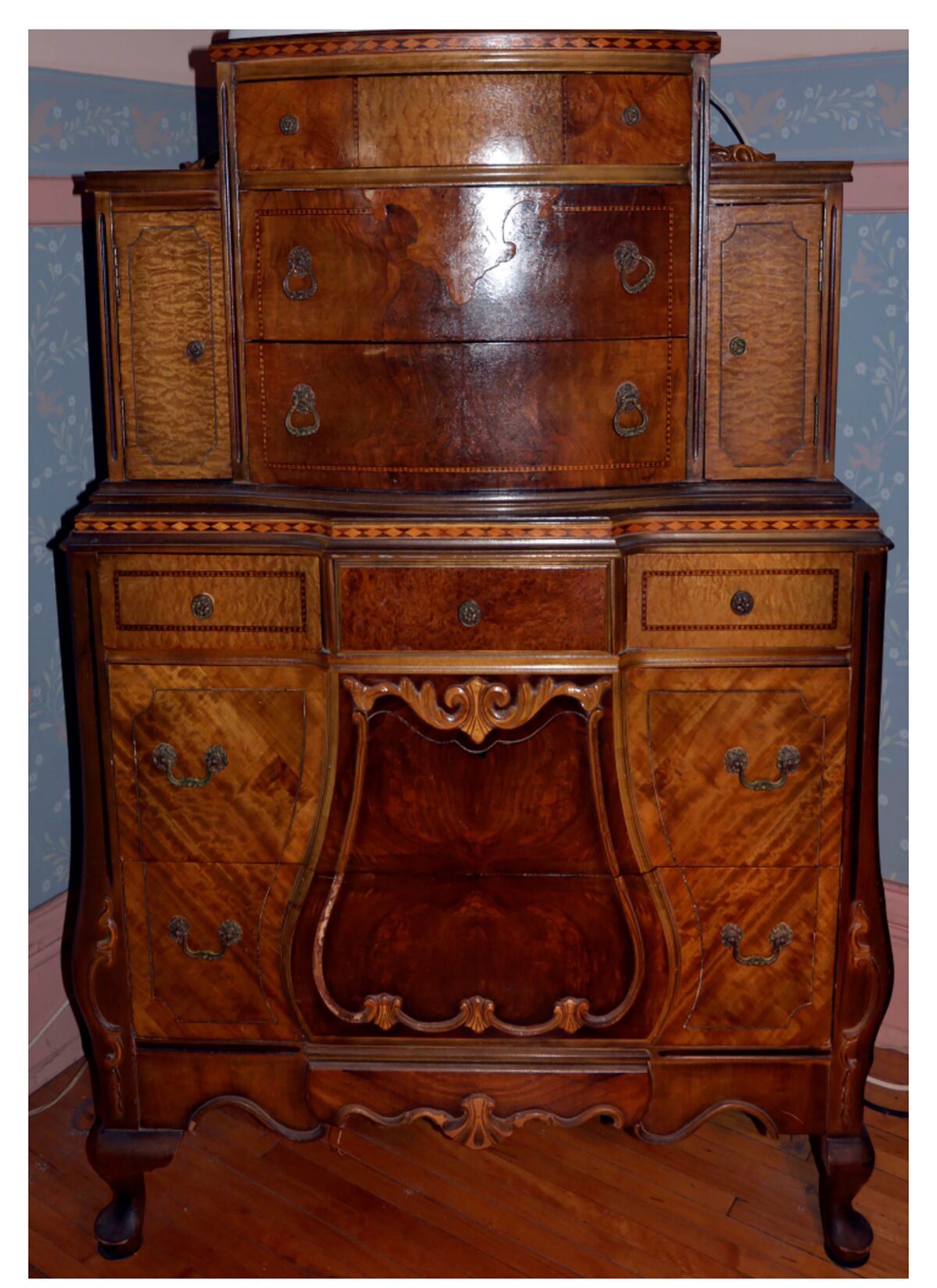 Dear Helaine and Joe:
I wonder if you can identify the period, style and approximated age of the bedroom furniture in the attached photos. The pieces were found in the attic of an old house in St. Paul, Minnesota. We “adopted” the furniture and always thought it was ornate, unique and heavy! But we don’t know anything about its history. What can you tell us?
Thank you,
S. K., Minneapolis

Dear S. K.:
For the time period in which it was made, this is an attractive partial set of furniture. We say “partial” because the set is missing a nightstand, a bench for the vanity dresser and probably another chest or dresser.

This was an elegant set when it was made in the United States, probably somewhere in the Midwest. Places such as Grand Rapids, Michigan; Zeeland, Michigan; Evansville, Indiana; Batesville, Indiana, or a myriad of other heartland places could have been the place of origin. But without a label or a branded-in signature it is hard to say more than this about the manufacturer.

“Manufacturer” is the correct word in this case, not craftsman or cabinetmaker. The set was made in a factory using methods of mass production that can easily be seen in the pressed bellflower motifs on the vanity and bed headboard, as well as the pressed shield that forms the crest of the mirror and the aforementioned headboard.

This is not a bad thing, necessarily, but it is typical for American furniture made in the 1920s and early 1930s. If we were pinned down, we would say the set was built just before the stock market crash in 1929, say circa 1924-28.

As for the style, it is a standard 1920s mishmash. But at the time, it might have been referred to as “formal French” or something close to that. In truth, we think these are nice examples of 1920s French-influenced furniture with exceptional veneers of exotic wood that create a kind of kaleidoscopic fan across the top of the vanity table.

We also think the extensive elaborate string inlays — one large band of diamond shapes and another narrower band of square shapes — are eye-catching and add both interest and value to this set. There may, however, be a problem. In the photograph we think we see a large area of discoloration on the vanity dresser top that is distracting and may be hard to fix.

Veneers on 1920s furniture can be delicate and must be treated with a certain amount of care and caution. If this large area does in fact exist and S. K. wants to fix it, she should make sure the vanity is placed in the hands of a professional who understands the need for finesse and a light hand.

As for its insurance replacement value, with a large discolored area on the vanity, it is about $1,000 for the set. Without the stain the price should rise to around $1,500.