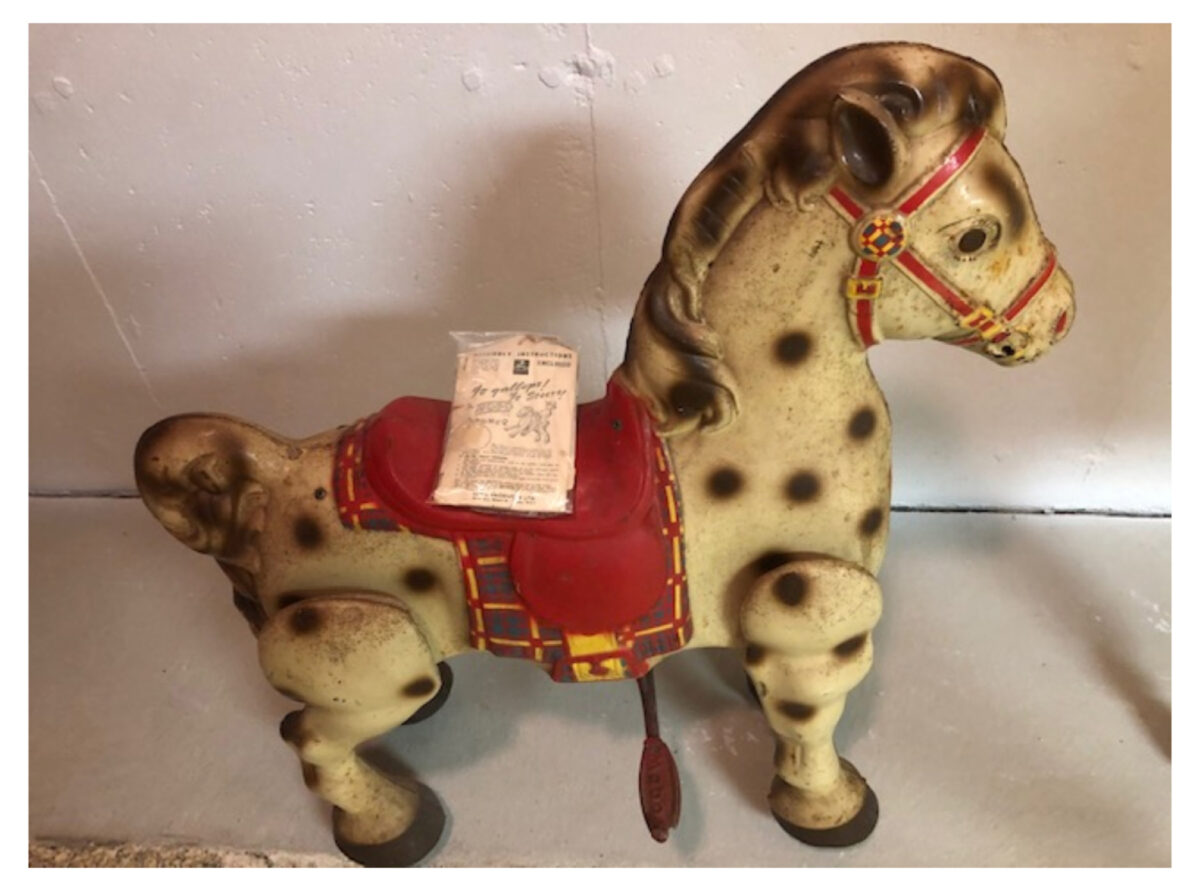 This horse from Mobo is called "Bronco." (Handout/TNS)
Home

Dear Helaine and Joe:
Might you be able to help us determine the approximate value of this Mobo horse? We would also like to know a little of its history.
Thank you for your help,
K. P.

Dear K. P.:
Ride ’em, cowboy! The phrase echoed through the minds of many boys and girls (ride ’em, cowgirl!) during the early years of television.

Many of us can remember lying on our tummies in front of the television watching shoot-’em-ups as long as Mom and/or Dad would let us.

Merchandise associated with these Westerns was in toy boxes in many homes in America. In many more cases, more generic-themed toy riding horses took up floor space in bedrooms, playrooms and almost any other room in the house where there was a TV.

Mobo Toys were made in Erith, Kent, England, between 1947 and 1973 by D. Sebel & Co. David Sebel immigrated to England from Russia about 1912 and went into business as a wheelwright. Over the years the business developed into making such things as fronts for motion picture theaters, milk churns and cleaning carts.

During World War II, the company made aircraft and tank parts, plus parts for bridge building and air raid shelter bunk beds. After the war, there was a surplus of labor and a shortage of the kind of work they had been doing, which led Sebel and his brother Henry to begin making metal furniture and toys.

Shortly after the initial startup, the toy division was moved to the old Vickers Gun Works in Erith, and when the name “Mobile Toys” was rejected, “Mobo” was chosen instead. The symbol for the new company was a circus clown, and in later advertising, there was Mr. Mo and Miss Bo.

The piece in today’s question is “Bronco,” which was Mobo’s most popular product. First made in 1947, it is said that schoolchildren chose the color scheme of red and yellow. Initially Bronco could only be ridden straight ahead, but in 1950, “magic steering” was introduced that allowed Bronco to be ridden straight ahead and steered either left or right.

In the photographs of K. P.’s Mobo Bronco, we see the emblem on the horse’s chest, and we think there is a banner above that says “It Steers,” which signifies this example was made after 1950. Unfortunately this model stayed in production until 1971, so we cannot narrow the time frame further.

The condition of this example is exceptionally good. K. P. still has the instruction pamphlet and we see some scattered spots of rust, but overall, the condition is above average assuming that Bronco still works. Insurance replacement value is in the $350 to $450 range.