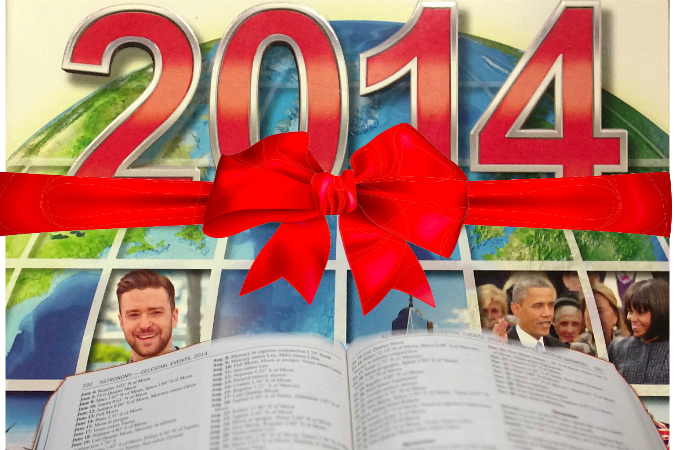 It’s not a fancy book—the color pictures are limited, it’s printed on newsprint, and it uses the most compact font normal vision can see. But for those addicted to lists, this book is 1,008 pages of pure statistical joy. The 2014 World Almanac and Book of Facts.

Despite of being the golden age of Google search, there’s something remarkably efficient and satisfying about finding information in the Almanac’s pages. As long as you know the kind of information it contains, you can zero-in on what you want pretty quickly, and most importantly, you can trust that its sources are thoroughly vetted. As a fact-checker or fact-lover, it’s an invaluable tool.

Publishing since 1868, the Almanac adds new features every edition. This year it includes a section on Marriage in the United States, the World at a Glance, 2013 Top News Topics, and a color spread of 2013 Year in Pictures.

Here are some of the stats fact junkies will find.

Best selling U.S. magazine in 2013:
AARP The Magazine (AARP is formerly the American Association of Retired Persons), with a paid circulation of 21,931,184.

States giving best deals on personal income taxes:
Almost all states zap you even if you make only a few thousand dollars per year. The only states to give a free ride in 2013 to the lowest income earners are Delaware and Maine.

Colleges and universities by the numbers:
There’s a 16-page list of every single four-year college and university in the United States with the year they were founded, tuition, room and board cost, degree, enrolment, number of faculty, and graduation rate. Yale has a 96 percent graduation rate, costing an average of $57,500 per year betwee tuition and living expenses. Just above Yale alphabetically is Xavier University of Louisiana with a grad rate of 47 percent, costing a student $26,300 annually.

Olympic champs dating back 117 years:
The stats-filled sports section includes a 20-page list of every Olympic champion ever. For example, the gold medalist for men’s 100-meter run in the 1896 Summer Olympics in Athens, Greece was American Thomas Burke who won it with a time of 0:12:0.

Almanacs buried as time capsules:
1932 edition: Buried in the cornerstone of the Supreme Court building in Washington, D.C. by Mrs. William Howard Taft on October 13, 1932.
1938 edition: Buried in a 5,000 Year Time Capsule at the World Fair Grounds in New York, September 23, 1938.