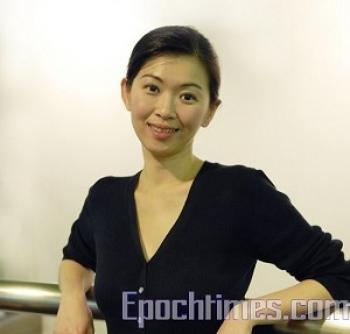 Bringing the Best to the Audience

The appealing piano melody streaming from her fingers was at times soft and graceful, and at times passionate. On the stage, she is an elegant pianist in a pink dress, behind the stage, she is “the prettiest stage manager” as her colleagues call her. She is the piano accompanist and stage manager of the Divine Performing Arts (DPA), Ms Pei-jong Hsieh.

Coordination Is Most Important

Pei-jong will travel with DPA to perform in the Mid-Autumn Spectacular in Toronto from September 24 to 28. She talked about her secret, how she handles two full-time jobs, “Only complete cooperation can make it work.”

“An outstanding soloist is not necessarily an outstanding accompanist. With the best skills, if one can’t listen and coordinate with others, then the ensemble’s music will not be in harmony and can’t touch people’s hearts. Being a stage manger is the same way, I need to work with everyone in every aspect. I need to be able to communicate and coordinate well, and be friendly.”

Pei-jong has been on the global tour with DPA since 2007. Many staff from the theaters that the DPA performed in said that DPA artists and staff were, “the most special group of people.”

“DPA is the most organized and efficient art company I have seen, we almost don’t have to do anything. They take care of everything themselves,” said a staff from the Adelaide Theater in Australia.

Bring the Best to the Audience

Pei-jong came from an artistic family. She learned ballet and music when she was little. She has a Master’s degree from the Peabody Conservatory of Music at the John Hopkins University and majored in classical piano. She was a student of master pianist Chen Hung-Kuan at one time.

“If you believe you can do it, you will,” said Pei-jong, “With the cooperation of DPA members, and the same wish we all share, we bring the best performance to the audience.”

In every theater, Pei-jong oversees the entire arrangement and coordination of the stage lighting, background projection, sound, and theater facilities. During the world tour, the tight schedule is a great challenge to her physical endurance, patience, and perseverance. There will always be problems, like jet lag and ill-equipped theaters. Pei-jong said, “Everyone in the team always tries their best to overcome the problems, and help each other solve any problems.”

Keep the Audience in Mind

Pei-jong tries to be considerate to every audience, “We want everyone in the audience to see the best effect no matter where they are seated, so they can experience the traditional Chinese culture DPA wants to present.”

DPA’s background projection has always been the audiences’ favorite. Every dance has its special background with colors that match the artists’ costumes.

Xie said that it isn’t easy to make sure every member in the audience can see the whole background. When setting up the stage, DPA staff go to every corner to check whether the projected background is in the best position.

“Sometimes the local theater staff don’t understand our efforts. They think those who bought less expensive tickets naturally should not expect to see and experience the performance like others. But for us, every person in the audience is just as important, no matter who he or she is or where they sit.”

“Many of the theater staff finally understood why we insisted in doing it this way— because they saw the effect it had on the audience.”

Pei-jong said that DPA members always maintain peace and benevolence in their hearts, “When they go on stage, they naturally show the audience their best. When they try to express the benevolent, beautiful, and righteous content of the arts with their pure hearts, they can move the audience. This is why in every performance there are viewers in tears as they watch.”

The artists exhibit no competitive spirit, they are driven to perfection by their desire to see everyone, the audience, their fellow performers, and themselves experience the fullness of traditional Chinese culture. Pei-jong said, “In DPA, the artists are happy to see their fellow artists do well in their programs.”

From December 2006 to May 2008, the DPA had toured four continents and given more than 300 performances. More than 800,000 people have witnessed its impressive and likable bearing.