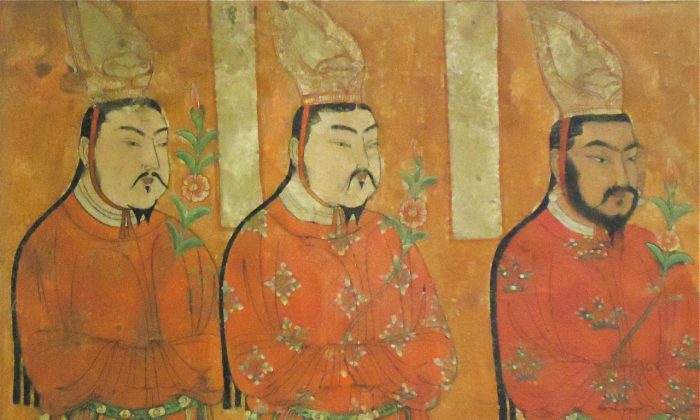 During the decades between the end of World War II and the fall of the Berlin Wall in 1990, the divided city’s Asian art collections were spread out among a number of museums. Then in December 2006, sixteen years after German Reunification, treasures from Afghanistan to Japan and from Tibet to the islands of Indonesia were brought together for the first time in the Dahlem neighborhood of West Berlin and showcased in a new Museum for Asian Art (Museum fur Asiatische Kunst).

For this visitor, the museum’s well-lit, generous display areas are reminiscent of a journey through a series of regional landscapes, a tradition popular in the work of Chinese artists. Visitors pass from one country to another down the rivers of history viewing changing landscapes of art that are arrayed like islands around each room. In an area devoted to Chinese painting, two birds in a plum tree from the 17th century by Ding Liang Sian seem to guard the riverbank. An 8th-century gilded mask of Shiva from the Kulu Valley in the Western Himalayas protects one corner of the South Asian section while in another, an 11th-century dancing Ganesh from Bengal still has traces of devotional sandalwood paste between his toes.

Placed among the artifacts of Central Asia, for instance, with its array of brilliant Silk Road wall paintings is the reconstructed 5th-century Buddhist sanctuary known as the Cave of the Ring-Necked Doves.

Discovered in 1904 in Kyzil on the Northern Silk Road by German archaeologists Albert von Le Coq and Albert Grunwedel, the entire temple was dismantled and reassembled here. Today visitors can enter the cave as Tocharian monks once did to experience the splendid murals that define a place of prayer and meditation. Another feature of the museum is the Japanese Tea House, constructed by carpenters from Japan to showcase that nation’s signature tea ceremony. A schedule is posted nearby giving the dates when guests can sign up to enter the tea house and experience the ceremony for themselves.

The Japanese collection is one of the strongest in the museum. Rooms displaying Ko-Imari porcelain and Satsuma ware flow into ones featuring painting and graphics. In 1820 capitalizing on the continuing popularity of the ukiyo-e woodblock print, Utagawa Kunisada, a master of the art, published an early guidebook to the best restaurants in Tokyo. Each print from ‘A Compendium of Famous Restaurants of Our Time’ on display is not only a publicity poster for an eating place but features a beautiful girl in front of a small portrait of the individual restaurant. From another series dating to 1770 and displayed nearby is volume 4 of Suzuki Harunobu’s five-volume series, “Beauties of the Green Turrets,” portraits of geishas and courtesans who lived in the Yoshiwara district of Tokyo.

The contrast between the art of China and the art of Japan so carefully laid out on the journey through the museum’s exhibitions is fascinating. Where Chinese art delighted in delicate ornamentation and multiple meanings, Japanese art attracted the original minimalists who reduced design to its bare minimum until the most artfully crafted shapes are presented in their most basic forms.

Whimsy though is present in both cultures. Chicken-headed ewers from the Yue kilns in China’s Zhejiang Province dating from the Eastern Jin (317-420) look like comic book characters about to peck for seeds while among the Japanese paintings is Tosa Mitsunori’s early 17th-century scroll, “Enjoying the Evening Cool on the Kamo River in Kyoto.” On the scroll Mitsunori shows a hot evening at a still popular riverside spot. Breezy wooden platforms crammed with diners are built out along the shallows of the river while tiny waiters carrying food, their robes tucked up to their waists, tip-toe gingerly through the water. Passing through the galleries of Berlin’s Museum of Asian Art, the exhibits speak many languages but their message is universal.