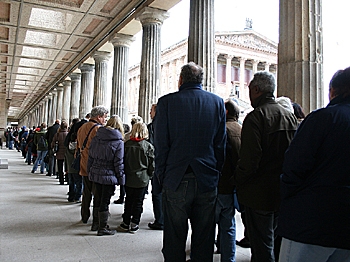 By Rosemarie Fruehauf
Print
BERLIN—Thousands of Berliners lined up on Oct. 17 as the Neues Museum reopened after 70 years. The building is part of the World Cultural Heritage Museumsinsel (museum island) complex, an island in the river Spree in the heart of Berlin.

Built from 1843 to 1855, the Neues Museum, a Friedrich August Stüler design, was home of the Egyptian Museum and Papyrus Collection as well as the Berlin Museum of Prehistory and Early History.

Aimed to be “a center of the nation’s highest strivings” and lushly decorated with murals illustrating the history of old Europe and Egypt, the museum is a key example of the artistic and technical achievements of 19th century museum architecture.

At the outbreak of World War II, the Museumsinsel was closed; the Neues Museum was hit by bombs and half of it—the entrance hall and Egyptian courtyard included—burnt down completely.

The ruins suffered further erosion in four decades of German Democratic Republic dictatorship. After the reunification of Germany, a masterplan was made to set the three empty museums on the island back into an original state.

In 1997, London architect David Chipperfield was commissioned for restoring the Neues Museum. His concept: rebuild the lost parts while embedding the antique fragments that were declared UNESCO World Cultural Heritage.

Six years of construction work and a 212 million euro (US$316 million) budget later, the visitors of the opening day were stunned by the symbiosis of the building and its exhibits that Chipperfield and Berlin curators had achieved. The Neues Museum, the total work of art that it was meant to be, was brought back to life and the Museumsinsel again completed.

Yet the most exciting aspect is how the environment is matched to the artworks on show, as the four floors of 8,000 square meters (86,111 square feet) display 9,000 objects that come from the Stone Age to the Middle Ages, from North Africa to Scandinavia—almost the whole cultural past of mankind.

The exhibition consists, as it had before World War II, of the Egyptian Museum and Papyrus Collection, the Museum of Prehistory and Early History, and objects from the Classical Antiquities Collection. A special highlight is Troy excavator Heinrich Schliemann’s own collection of Trojan antiquities that he had bequeathed to the museum “for their eternal preservation.”

The presentation is not chronological, but laid out more like a mind map, each room with its own theme.

Especially in the Egyptian part, with its 2,500 objects, the show touches almost every aspect of life: the gods and kings, the daily life, the offering practice, the journey to the afterworld people believed in. Even the scholarly history of Egyptology has its place.

Most special are the portrait heads of the Amarna period (1351–1334 B.C.), a time when the religious reforms of King Akhenaten produced an art style that outlined the individuality of a human being for the first time in Egyptian history. A highlight of the section is the bust of Queen Nefertiti, Akhenaten’s beautiful wife.

Set as if in a little temple and enshrined in a 13-feet tall vitrine, Nefertiti exudes an almost divine aura in her new home. Her earthy colored face glows mystically in front of the dark green walls of the North Dome room that belongs only to her. From there she has a view down corridors to the other end of the building, where a monumental statue of sun god Helios (second century A.D.) becomes her Roman-Greek antipode.

If you walk over to Helios, you come by writings on papyrus; learn about a Roman boy bronze statue (Xanthen Youth) that was once robbed by the Germans, the history of Rome and the struggles with its provinces, and eventually about the Roman gods. Viewing the exhibit as such requires your flexibility as the displays are not chronological. But this is an interesting way to show how the religious and political ideas of the nations were the driving forces for establishing their values and cultures.

There are also sections that are easier and more practical to understand, such as the prehistoric museum on the third floor, which targets families and school classes.

Here you learn what a hoard is and see things that survived because they were buried in moors and caves—presented in the exhibit as they were found. Armor, pots, adornments, and a big German bronze trumpet with audio sample make up the display.

A highlight here is the "Golden Hat" (1000–800 B.C.) found in south Germany, which was a ceremonial hat for a priest or king and is embellished with circular ornaments that work as an exact calendar.

The oldest item in the museum is a bi-face, about 700,000 years old. Also on show are a Neanderthal from Le Moustier and a modern man of Combe Capelle, along with a huge elk skeleton and a mammoth bone.

American Musicians on Opening Day
Among the visitors of the Neues Museum were two young artists from the United States, Andrew Norman, a classical composer from Los Angeles, and violinist Theresa Au from Chicago.

"It's a fantastic museum," said Norman. "It's beautiful. I really loved the renovation and I loved how they left some of the old and kept it newer. The art seems to be displayed in a really beautiful way."

Au referred to the war damages that architect Chipperfield insisted to keep visible. "We saw the bullet holes on the outside," she said. "I was just wondering how amazing, how tremendous this is to restore the whole thing, [and] how badly ruined it was." She especially liked the combination of the old and the new materials.

"It seems to me like quintessentially Berlin," Norman said. "You see the history of the city in this building. The building itself is not just an empty vessel for the art, but is actually sort of in dialogue, it’s a sort of structure itself and you can see its history and I definitely like the way that’s exposed. That’s a truer, richer experience of whatever art they put here. It’s so much of the art itself, which is in a state of decay or is broken, so the building is sort of broken, too."

Au mentioned the integrating strategy of the architect in putting so much importance on the surviving fragments "you show this like a piece of art among the other art."

The one and a half hours it took them to get in was worth it, Norman said. "I was happy to wait in the line, because it felt like everyone was here to celebrate the art and it felt like an important place to be, to be with the German people here, when they are opening up their museum. … It was really fun."