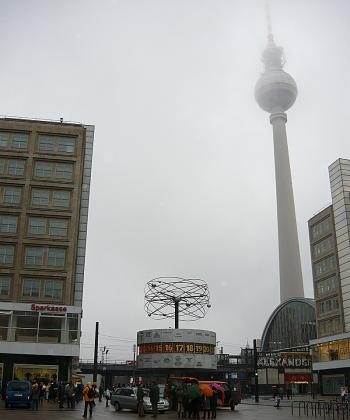 By Ekaterina Popova
Print
November 9, 2008 commemorated 19 years since the demolition of one of the symbols of separation in Europe and the Cold War after WW II—the Berlin Wall. It was part of the border between the Federal Republic of Germany and the Democratic Republic of Germany (DRG) from August 13, 1961 to November 9, 1989. The Wall separated West Berlin from its Eastern territories. This separation, known as the “two halves” of Germany took its due place as the most popular symbol of the Cold War.

The entire wall consisted of 45,000 concrete blocks—measuring 3.6 by 1.5 meters each with rounded corners to impede escape attempts. However, history remembers 191 Germans who found their unfortunate death in attempting to pass to the other side of the wall during the night. In fact, more then 5,000 people managed to escape to West Germany. Some of the most famous incidents were several mass escapes via, a 149 meter-long tunnel, and crossing over the border by going through the windows of adjacent flats.

In fact, the wall has become the symbol of the complete failure of the communist régime.

Many people from East Berlin burst into West Berlin in 1989. At that time, the demolition of the wall began. Now, 19 years later, many Germans keep a piece of the wall in their homes.

One of the Most Preferred Tourist Destinations in Europe

Today, Germany’s capital has a completely different outlook. It is one of the most preferred tourist destinations in Europe. I am still not clear as to why mentioning Berlin made me think about it as a gray, dark, and rainy place.

In fact Germany’s capital appeared to be an incredible, cosmopolitan, and bright place; the light rain that drizzled every morning while I was there stops at noon, and the sun rises above the tower next to Alexanderplatz.

Every day carried its own experiences. The streets buzzing with young people; motorbikes and bicycles are respected. The bicycle roads are everywhere.

The architectural styles are a mixture of past and present times, and they are intertwined to look their best. Tall buildings are separated by more traditional height structures. Stone walls and glass compliment each other with a variety of façade colors and many billboards.

Most likely symbolism has become irrevocable in the lives of Berlin’s people. The most popular symbol in this regard is the Brandenburg gate, which is engraved on the German euro currency.

For someone like me, who related Brandenburg only with the concert pieces of Johann Sebastian Bach, the view that’s revealed in front of the eyes on Pariser Platz square in front of the gate is magnificent. The gate is no more then 200 years old. Until the destruction of the Berlin wall it symbolized the separation of Berlin and Germany.

Today however, is quite the opposite—the gate is a symbol of the unity of the nation. Karl Gotthard Langhans built the gate as a model of the Propylaea, the gateway to the Acropolis in Athens, Greece, and is consistent with Berlin's history of architectural classicism.

Besides the beautiful ornaments on the facade, on top of the gate there is a 4-horse chariot, ridden by the goddess of peace. After the defeat of Napoleon, an iron cross was added to the goddess based on the style of Friedrich Shinkel. During World War II, the gate was seriously damaged, but was completely restored in 1956.

Among the favorite attractions in the new Berlin is Potsdamer Platz, famous also as the largest construction site in Europe. After the fall of the Wall, here arose restaurants, shops, theaters, and cinemas. The most famous commercial streets are Kurfürstendamm and Friedrichstraße, but every neighborhood has its own center with shops, bars, and restaurants. And all are full of people.

The shopping mania has its full force here. In Berlin sales and low prices are everywhere. The big shopping spree begins after 6 pm, when the work day has ended.

On Friday and Saturday everything is half price. Then, as in the United States, those who receive their weekly salary at the end of the week rush to the shops for great shopping. Women and men with 10-15 bags come and go in stores located in the city center. A pair of women's leather boots is 30-40 euros. So are the ladies' and men's coats. Shirts are 20 euros, and extravagant jewelry cost 5 to more then 100 euros. Jeans are from 20 to 60 euros on sale, jackets and dresses are between 30 to 50 euros. Actually, for Germans who receives an average of about 3000-4000 euros in salary, to spend 400-500 euros shopping on Friday night is not just a shopping therapy, but a commitment.

And if you do not spend a few lines about the clubs in Berlin, it will not be fair. Unfortunately, as in many other places in the world, burgers have monopolized the market. From every corner, Max Burger, McDonald's and Subway are watching you. Arab and Turkish diners, meat skewers and pizzas are respected food. The Schwarz coffee and the croissants are only for breakfast in the morning and the afternoon, and for dessert there is always German chocolate.

Actually, whatever I say about Berlin, you should go and see for yourself if it is true. It is a fact however, that the streets of the city have some special magic which obsesses the visitor.