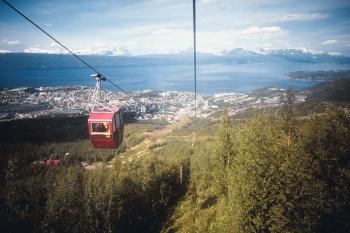 ECO-SMART TRANSPORTATION: An electric-powered funicular like this one provides transportation up and down the scenic slopes of Norway. (Wes LaFortune)
Travel

The 1,000-year-old city of Bergen, Norway, might seem like an unusual place to find inspiration for how to live well in the future, but this picturesque spot is full of such surprises.

Located on the west coast of the country, Norway’s second largest city was founded in 1070 when King Olav Kyrre sailed into its harbor and liked what he saw. And why not? Having served as the capital of Norway during the 12th and 13th centuries, Bergen today is home to 240,000 inhabitants and is a community that immediately makes sense because of its modest scale and the respect its citizens pay to the environment.

Bryggen, located along the eastern shore of Vagen Harbor, is the city’s most visited neighborhood. It beckons travelers to get out of their cars and tour buses and move around by foot to enjoy the plentiful restaurants and shops.

Bryggen’s collection of 60 wood plank buildings, some built during the 1700s, dazzles visitors with eye-catching primary colors. These buildings and the history they represent are the main reason why in 1979 Bergen was named a UNESCO World Heritage Site.

“Nowhere in the world will you be able to see wooden houses such as these still being lived in,” says my guide, Beate Salen.

Take a closer look at this rainbow of homes and you’ll view gargoyle-like wood carvings that are traditionally placed just outside indicating in what trade the owner toils. A bearded male figure wielding an axe is a sure sign that long ago a brawny lumberjack made one of these brightly painted treasures his abode.

Some of the other Bergen wood buildings were used to store dried cod. They also remind visitors of the city—once part of the Hanseatic League’s trading empire from the 14th to the mid-16th century—and how it has basked in the glow of wealth and power. Yet this sentinel of Scandinavia has also endured long-suffering misery during the days of the so-called Black Death that devastated its population in the 1340s and led to the collapse of the local economy.

These days, Bergen seems to encapsulate the promise of Norway—a nation that has gone from a “have not” country to one of the world’s richest in the matter of 20 years thanks to billions of dollars in offshore oil revenues.

But don’t expect to find the citizens of Bergen, or Norwegians generally, to be squandering precious natural resources. The country and this city are a model of environmentally responsible living.

“We are thinking environment all the time,” adds Salen.

In fact, the University of Bergen, which is affiliated with the Nansen Environment and Remote Sensing Center, operates a nonprofit research institute here. The institute has a global reputation for conducting environmental research in order to better understand impacts on the world's topsy-turvy climate.

The scientists would be well served to look no farther than their immediate setting for answers on how to be “environmentally friendly.” The people of Bergen practice a way of life that includes modern conveniences yet demands respect for the air, land, and water.

While taking the six-minute ride on the electric-powered funicular (incline railway) from the lower station to the top of Bergen’s Mount Floyen, my guide once again underscores to me this city’s environmental attributes.

At the top of the mountain, the panoramic vista yields dramatic views of seven mountains and seven fjords in what is arguably one of Europe’s best vantage points. It’s a perfect location to stop and appreciate what this city, often referred to as the gateway to the fjords, has accomplished in the past millennia.

Get to Bergen from Oslo by scenic railway or, if you must, drive. Then try to remember to do as the people of Bergen do. Treat the earth like you’ll still be around more than a thousand years from now.