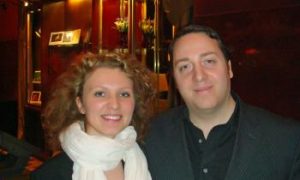 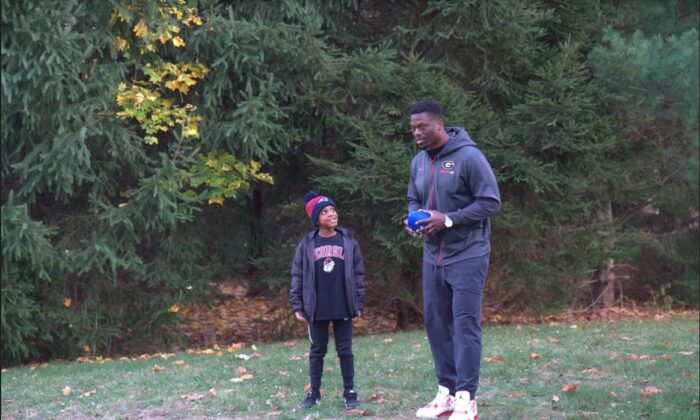 As a child, Benjamin Watson followed his father to games and training camps and developed his love of football early. His son Isaiah loves football just as much as Watson did when he was his age. (Shenghua Sung/NTD)
Life & Tradition

Benjamin Watson on Impacting Culture for the Better

As the oldest of six siblings and an athlete from a young age, following in his father’s footsteps, Benjamin Watson has always known that he was a role model.

Even as a high school athlete, he knew younger kids looked up to him. Then, when he became a football player in college, the high schoolers looked up to him, too. And as an NFL star, just by virtue of being in the public eye, you’re a role model even if you aren’t seeking it out.

And, of course, as a husband and father of seven, he takes seriously the importance of being a role model for his children.

“But what I’ve found is that in my sphere, in football, which is my workplace, these are all the things that people think about,” Watson said. “Everybody has their work to do … but we all live in the world and more specifically, the United States, so we’re all affected by certain issues of our day that come up: immigration, race, religion, taxes, freedom of speech—whatever comes up.”

These issues that many feel need to be hushed up are precisely the ones that affect us the most. Watson feels naturally inclined to engage with people who hold contrasting opinions.

“I like to engage with people and see what they’re thinking, and I think there’s a way to do that,” Watson said. “This civil discourse is something that is lacking on a broad spectrum, but personally I think it’s something very important, in order to communicate and in order to show respect to people that you don’t agree with and don’t agree with you.”

One of his current projects is precisely one of those topics that come with hugely emotional and divisive reactions.

“I’m working on a documentary called Divided Hearts of America and it’s about the topic of abortion—something that is I guess almost a lightning-rod topic right now,” Watson said. “But it’s something that is near and dear to many Americans’ hearts.”

It’s the first time that Watson’s done something like this, and filmmaking is completely new territory for him, but in light of several new and very different abortion-related laws being passed in various states this year, he wanted to dig deeper and “navigate the truth behind it.”

“Both on the liberal and on the conservative side,” Watson adds. He is personally pro-life, but he didn’t want to only speak with people who had similar opinions. He’s interviewed legislators sponsoring both pro- and anti-abortion laws and listened to their stories, and sought out advocates and people who have had abortions to tell their own stories. He speaks to people not just in politics, but also in academia, medicine, and culture.

“I think when we hear the statistics about where people stand and why, they can be very polarizing. I want people to see that there’s a lot of gray,” he said. “These are real women, these are real children, these are real men that are going through these decisions.”

Watson knew early on that the mainstream culture wouldn’t always align with his values. A lot of it—film and television—is entertainment, so he doesn’t begrudge it for that, but he is cognizant that what you watch and listen to does become a part of you.

“Whatever you allow to come in is going to affect you in some way,” he said. “If you’re not affirming truth and reaffirming those values on the side, don’t be surprised if your consciousness and your thought process start to slip in the other direction.

“Everything’s not going to align all the time, that’s to be expected. But in the same token, if culture is speaking with one voice, it’s important that we speak with another voice, to counteract it,” he said.

Watson’s first role model was his father, and his parents are the kind of models who passed on their values, both by living them and through instruction.

“My dad always said give 100 percent in anything you do,” Watson said. It was not only about success but effort. “Did you prepare yourself? Did you work as hard as you could unto the Lord and not for me? That was really big in our house.”

Knowing right from wrong, having integrity, good character, service, leadership, charity, and loving people who may not be like you were all values he grew up with as a child, and now instills in his children. But Watson reminds us that even if we didn’t grow up with parents who modeled certain things, “it doesn’t mean that can’t be your story.”

Family is a big topic for Watson.

“The importance of family is not just internally, within the walls of a house, but how our family affects culture, how family affects politics, and how it affects this country,” he said.

Manhood and fatherhood are things that come up when you’ve been in a locker room as Watson has for the past 16 years in the NFL.

“Around 50-something guys, and we’re having a conversation about guys having their first children and everything. And they’re scared like I was having my first kid,” Watson said. “And I’m able to encourage them that you have what it takes to be a great dad. And not only do you have what it takes to be a great father and to love the mother, but we need you to do that. The mother needs you. The child needs you. Society needs you to step into that role. And if I can encourage them and equip them, that’s something that I always want to do.”

Family isn’t something that just happens. You have to work for it, and that’s why it’s rewarding.

Watson is asked for advice on everything, from how many diapers to buy to dating. After he and his wife had their second child, she encouraged him to compile all of that into a book. Eventually, it happened, and now he’s able to hand his teammates a copy of “The New Dad’s Playbook,” which covers the first OB-GYN meeting to medical terms to preparing a loving environment for the baby to come into and everything in between.

“It’s also kind of encouragement to men, because I feel like culturally, we live in a time where manhood is sometimes degraded or underestimated, or men feel like it’s not important, or they feel like they simply can’t be the man that they’re needed to be. So that’s part of the book as well,” he said.

Watson is always ready to give realistic and honest advice—perhaps guiding his children through every current event as a teachable moment has given him plenty of practice on that front as well. The Ferguson, Missouri, shooting, for instance, meant they talked about policing, killing, respect, race, and how you engage with people who don’t look like you.

“We don’t shy away from those things,” he said. “We want them to have genuine respect for all types of humanity.”

That includes having integrity, sticking to your word, understanding people’s need for grace because, at the end of the day, they’re human, and standing up for those who are mistreated.

“If you see someone being mistreated, being bullied or something, I expect you to stand up for them. I expect you to use your voice. We want them to grow up to be men and women who care about other people,” he said. And above all, the Watsons want their children to grow their faith and make the decision themselves to follow God.

The Watsons have seven children—the two youngest are twins who arrived in April.

“We have fun together. Right now, they’re at the point where they’re involved in different things, my daughter does ballet, my son does flag football, my other daughter likes to run and do track. We’re starting to get to that age where we’re a bus service sometimes, taking kids from practice to practice,” he said with a laugh, adding none of this would be possible without his very orderly wife, who keeps everyone on schedule.

Faith Is Not a Suitcase

As an NFL athlete, life is full of ups and downs, tremendous highs and lows.

“You win, everybody loves you. You lose, everybody says you’re terrible,” Watson said. “I can’t ride the wave of everyone’s opinions.”

Watson is a self-proclaimed recovering perfectionist, and readily admits he’s tied his football performance to his self-worth.

“Which is a very, very dangerous place to be in, in whatever field,” Watson said.

Luckily, he said, early in his career, he had a teammate tell him to leave work at work.

“You can’t take the struggles, the disappointments, the trials, the victories or defeats from work, and bring it into your house, which is a safe place with people that love you for you, and take it out on them, whether it’s good or bad,” Watson said.

He gives the same advice in his book: Maybe it means taking an extra 10 minutes sitting in the driveway and letting go of the day, but you have to learn how to do it. It won’t be immediate; Watson said it probably took two or three years to really learn how to do that, and his faith provided him an anchor with which to battle the highs and lows.

“Faith is not something we carry beside us,” Watson said. “There’s a misconception that your faith is here, in this suitcase, and I’m carrying this with me into this situation, that situation.”

Faith is something inside you, inseparable, and for Watson, that provides perspective. Football requires a narrow perspective, with a focus on improving day by day, but God has an eternal, wide perspective, he said.

Watson takes comfort in the fact that nothing catches God by surprise.

Football has always been tied to faith for Watson; it’s his way of using his talents to honor God and have conversations about him. He and his teammates pray before every game, and a group of them will come together after every game, win or lose, to thank God for their health, the opportunity to play, and pray for those who were hurt as well.