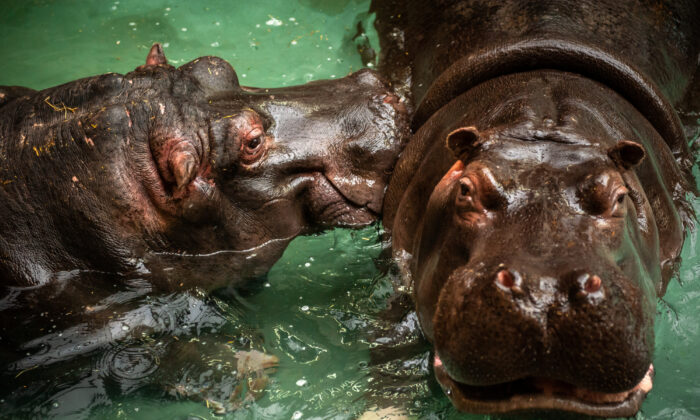 Two hippos at Antwerp Zoo were confirmed to be infected with the COVID-19 virus. (Photo by Antwerp Zoo)
Animals

Two hippopotamuses at Antwerp zoo in Belgium have reportedly contracted the CCP (Chinese Communist Party) virus despite showing no symptoms other than a “runny nose,” the zoo said in a statement on Dec. 4.

The Sciensano National Veterinary Laboratory confirmed the hippos, 14-year-old Imani and 41-year-old Hermien, tested positive for the virus. But the origin of the contagion remains unclear as none of the zookeepers have recently contracted the virus or shown any symptoms.

According to the zoo, all the mammals passed COVID-19 testing last year, and no cases were reported until veterinarian, Francis Vercammen, noticed the two hippos always had runny noses.

“This time, they expelled glanders that I had tested as a precaution to verify the absence of bacteria. The result was negative. But given the news, I took the additional decision to test the samples for COVID-19, which gave this surprising result. To my knowledge, this is the first known contamination in this species,” Vercammen said.

The two hippos had been kept in isolation and under the close supervision of the keepers. Antwerp said it reinforced tightened security around the zoo, and the hippo building is closed to visitors until the “test values are negative again.”

“The samples have been sent to the Sciensano National Veterinary Laboratory for final confirmation. The hippo building was immediately closed to visitors and the handlers were tested. They are negative,” Vercammen said.

According to the Centers for Disease Control and Prevention, animals can become infected with the CCP virus after coming in contact with infected people, but deemed it “rare” for animals infected with a coronavirus to pass it on to people.

Last month, two-spotted hyenas in a Colorado zoo were infected with the virus, along with seven lions and two tigers. The United States Department of Agriculture (USDA) reported that the hyenas were tested after lions at the zoo showed signs of illness.

Meanwhile, animal health company Zoetis Inc announced, in July, that it had donated more than 11,000 doses of its experimental COVID-19 vaccine, which the USDA had authorized, to nearly 70 zoos across the United States.

Zoetis also donated the vaccine to more than a dozen conservatories, sanctuaries, academic institutions, and government organizations located in 27 states. It stated that Oakland Zoo in Northern California received its first shipment of vaccines in June, with tigers, black bears, grizzly bears, mountain lions, and ferrets becoming the first to receive the first of two doses.