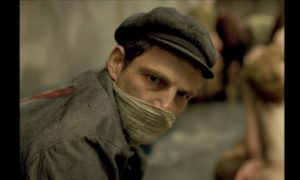 “This whole project was a blessing for me,” said Kacey Cox, the Toronto-based director and producer of “Finding Manny.” “I grew so much, personally and in my understanding of what the Jewish people experienced in the Holocaust: meeting a guy like Manny and spending time with him, learning about his personal outlook, his philosophies, and his sense of optimism.”

“Finding Manny” is the story of a family journeying back though space and time not only to revisit one of the worst genocides in history but also to retrace the steps of Manny Drukier’s journey from Poland to Germany as a child. His family experienced the trek through the very personal lens of their husband, father, and grandfather.

As the title suggests, the documentary is about finding this man literally, as a historian had been searching for him—and also figuratively. This experience offered an opportunity for the family to contextualize, reconcile, and empathize with his life. He, like many survivors, had remained silent about his past for decades. In a very real sense, his family found the man they didn’t quite understand or fully know.

The project began with a set of serendipitous events. While on a trip, Kacey explained, he got a call from his acquaintance Cindy Drukier, telling him that she would be going to Toronto the following week to visit her parents. Her elderly father, a Holocaust survivor, was going to be opening an old cigar box full of World War II-era photos, which he’d never shown the family before. She wanted Kacey to film the event.

No one, at this point, had any idea that this event would lead to a three-year project and feature-length documentary.

With the family present, Manny brought out the cigar box. “And that’s when it got interesting,” Kacey said. Just after the end of the war, Manny ended up hooking up with one of General Patton’s brigades, supporting them as a translator. Manny became almost an honorary member of the U.S. military for a short stint.

“Then he starts pulling out photos from the concentration camps. You’re seeing dead bodies and, you know, stacked up, stacked on top of each other, emaciated. My jaw just dropped. Everyone there was jaw-dropped—with the exception of Manny. Maybe Freda, his wife, was not hit so hard, but his daughters were gasping.”

Now, strangely, around that same time, Manny’s son, Gordon, an astrophysicist living in Connecticut, had stumbled upon a Smithsonian Magazine article about a place called Kloster Indersdorf, a home for displaced children in Germany. This is the place where his father had found refuge after the Holocaust. Gordon forwarded the article to his parents.

To her amazement, Freda instantly recognized her then-teenage husband in one of the photographs! Manny, too, was shocked. He read the article and discovered an interview with his best friend from the orphanage, Erwin Farkas. Manny set about finding Erwin, who then led him to Anna Andlauer, a German historian whose mission is to find the orphans from Indersdorf.

Kacey filmed the serendipitous Skype meeting a few days later between Anna and Manny. Anna explained that she had been looking for survivors from Indersdorf, and Manny, specifically, for nine years.

Anna “gets a certain amount of funding for the survivors to cover their fare and their stay if they can come back and visit the orphanage and do an educational presentation for the townspeople and young visiting students,” Kacey explained.

“For some of the survivors, it’s like a healing process, or part of their own internal journey. And so, on that same call, Anna invited Manny back to Kloster Indersdorf.”

Initially, Manny rejected the invitation. “Why would I go back to the place of the worst horrors?” he asked his daughters.

Anna’s suggestion also sparked the idea of filming more. “This could be a potential documentary if Manny would go on the trip, and the documentary aside, this would be a great opportunity for the family to get to learn more about their father,” Kacey said.

A Journey Back in Time

Amazingly enough, everyone in the family was able to take time off, so they turned it into a family trip: retracing Manny’s roots, first in Poland and then on to East and West Germany.

And so began the epic journey, with Manny’s three grown daughters, son, son-in-law, and two grandchildren traveling to Manny’s childhood home, and to the places where he hid as a boy in Nazi-occupied Poland before he was caught by the Germans.

One of the most significant moments of the trip for Kacey was visiting the Auschwitz concentration camp. “The place is massive,” he recalled. “We got there in the morning. The place was shrouded by a forlorn, gray mist. It felt haunted. You could actually feel the presence of a tragedy there.”

“It was pretty life-changing to visit that place,” Kacey recounted. “Intellectually, my knowledge grew by going there, but internally and emotionally, that side of me really felt it.”

Manny chose not to go to Auschwitz that day. For the members of the family who did go, Kacey acknowledged, “It was quite emotional. You just saw the looks on their faces. Especially as the guide was explaining the specifics of how things were conducted there,” he explained.

Getting to Know Manny

“Each of Manny’s children had had their own way of interpreting the different aspects of their father and how that had played out in terms of their relationship with him growing up,” Kacey said.

Of the four children, Manny only shared his stories with Gordon, the oldest and his only son, while everyone else only got little bits and pieces of it.

“Gordon’s bedtime stories would be stories about Manny in the Holocaust, stories about what he did to survive or, you know, here’s what sort of ingenuity I used to whip up something that might be useful during those periods we were in hiding, or while we were in the camps.”

Occasionally, as they were growing up, Manny would use dark humor about his past. When the children returned from summer camp and said, “We had fun at camp,” Manny might joke, “Well, at my camp, there were eight of us to one bunk,” Kacey said.

There was certainly much that the family needed to integrate and process about their history as a family, personally, and collectively as a people.

Perhaps the trip and film’s culmination was Manny’s presentation at the Indersdorf school, the pitch-perfect experience for all involved.

“At least six busloads of students were there [at one of the two presentations]. The place was packed,” Kacey said. “That day was pretty special. You could feel this energy in the room. The kids, without any prompting from their teachers, had been bringing gifts up on stage for Manny.

“They were doing it from their hearts. It was so emotionally touching. I just knew this was magical,” Kacey said.

This event gave the director a pivotal experience, transforming him from an objective filmmaker to a fully engaged human being, committed and impassioned to tell this story, recognizing that it could really connect with people.

One female student in the audience asked Manny what he thought about the German people. He answered that he took each person on his or her own merit. “I don’t look at Germans as all the same. It’s really down to the individual,” Manny replied.

“After that, it felt like everyone in that room, they all had permission to release themselves from this burden, because they were there, they wanted to learn,” Kacey said. “They wanted to embrace what had happened, take ownership of that, and whatever they could do to right those wrongs. It was amazing.”

Manny’s positivity and strength to endure not only saved his life during the war, and allowed him to start a new life in Canada, but also continues to inspire others to this day.

“There are times while working on the film, or just in my own life, when I recall Manny’s attitude and say, ‘OK, you know, what would an optimistic person like Manny do; how would he approach this situation? Would he be defeated by it, or would he look at the bright side and say, I’m going to overcome this?’” Kacey said.

“Manny is just a blessed person. He sees it as luck and part of his personality, but I see it as part of the larger design,” Kacey said. “I feel like my life has been enriched with this project.”

“Finding Manny” won Best Documentary at the Moving Parts Film Festival and the Audience Choice award at the Albuquerque Film and Music Experience. It was produced by Kacey Cox, Long Trek Home Productions, NTD, and by Jan Jekielek and Cindy Drukier, both of whom work for The Epoch Times. Directed by Kacey Cox and narrated by Stephen Baldwin, the film received funding from the Canada Media Fund, the Claims Conference, Doc Institute, and from generous private donors.