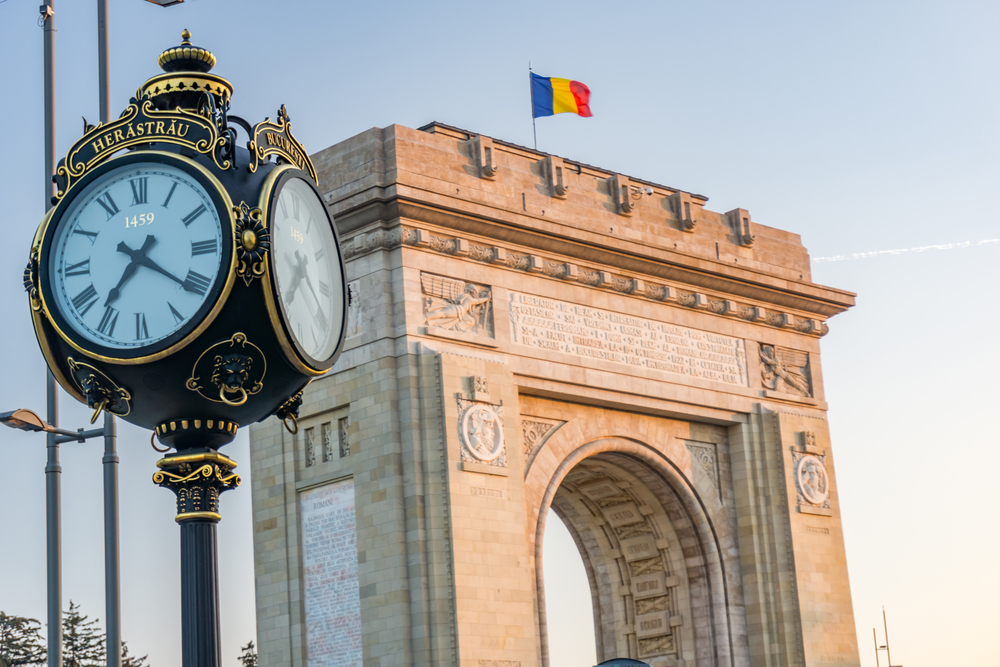 The upheavals of 1989 are now a long time ago, but walking down that street in the heart of the capital, Theresa relived it all, like yesterday. Unlike some revolutions across Eastern Europe, the uprising in Romania wasn’t peaceful. Over there, she says, pointing to a balcony, that’s where Nicolae Ceausescu made his last speech.

The notorious dictator thought he was whipping up a rally of 100,000 who would cheer his continued rule, but soon, the massive assembly turned into a riot that would change the history of this country. People shouted slogans, and waved the national flag—with the communist insignia cut from the center.

Here, she said, we all flooded the street, everyone watching each other’s backs. Down that lane—the troops rushed us. And that office building? That’s where they started shooting. It was a seminal event, tanks rolling in, snipers firing from all sides. Soon, both Nicolae and Elena Ceausescu would be executed, and a new chapter—one of many for this city, and this country—began.

Bucharest may not be high on many travelers’ lists of European capitals. But while it doesn’t quite capture the romance of London or Rome, this city of about 2 million was once known as Little Paris, with its architecture bringing together Art Nouveau, Romanian Renaissance, and Art Deco. And while some of that has been destroyed—by war, neglect, and difficult decades in the 20th century that included the misguided fiat of a dictator—this is still a fascinating city to explore.

Settlement here dates back to 1459, and like many cities in the region, Bucharest has been occupied, and shaped, by a succession of empires, including the Ottomans, Russians, and Habsburgs. In 1862, it became the capital of the brand new Principality of Romania, and in 1881, the Kingdom of Romania.

And with its new prominence, modernization came in a flash, with electricity starting to flow, gas lamps illuminating the streets, and major fortifications and other public works (including a canal) constructed. These were heady days, when connections with Paris were close. Locals even wore French fashions and greeted each other en français.

Occupied by the Germans in the first World War, the interwar years saw continued growth for the capital. The city welcomed a steady influx of population and the construction of landmarks continued, including their own version of the Arc de Triomphe, finished in 1936. Standing 90 feet and built from Romanian marble, it’s still the site of military parades on the country’s national holiday, Dec. 1.

World War II was hard on Bucharest. A major transit route for the Axis powers, Allied bombs fell heavily on the city. When Romania joined the Allies in 1944, German bombs followed suit. In the aftermath, the country became a communist satellite state, and Ceausescu proceeded to raze whole blocks of the city, literally paving the way for its replacement by new buildings constructed in the socialist realist style.

Sometimes, those demolitions weren’t actually replaced with new structures, which left a certain uneven feel in the city that remains to this day, with large, open, sometimes unclaimed spaces in the middle of dense urban areas.

Ceausescu did hire 700 architects to construct the second-largest office building on earth. Begun in 1984, it’s still unfinished. I took a tour of the Palace of the Parliament, seeing just a tiny fraction of this four-million-square-foot structure, which rises, gray, and maybe a little gloomy, from a bright, green park and a long boulevard, with fountains flowing in the middle and a canopy of trees blooming along the sides.

Second in size only to the Pentagon, the building, sometimes known as the Palace of the People, includes 3,000 rooms and houses two chambers of parliament and three museums. But more than two-thirds of the massive building remains empty, perhaps not surprising, given the enormous resources required to power and heat such a big place.

The guided tour takes less than an hour and includes ballrooms, grand staircases, and portraits of the Ceausescus. Everything feels outsized, too big, from chambers to hallways, as if built to accommodate a giant. The guide reels off an array of facts—the building has eight underground levels, connects to miles of tunnels, is the heaviest building in the world, in part because it contains 35 million cubic feet of marble. The tour finishes on the Dictator’s Balcony, and overlooks a surprising amount of green space, right in the beating heart of the city.

Looking out from there, it’s an invitation to take a walk. Every city has a rhythm, and the best way to feel that beat is to take a random ramble. Close your phone, put Google Maps in your pocket, and just roam. Starting in the Old Town, its cobblestones were still a little sleepy, just a few patrons dining on patios at the restaurants, the bars waiting to heat up at night, when the area gets busy.

I popped into the Carturesti Carusel, opened as the headquarters of a bank at the beginning of the 20th century, recently renovated into a bookstore. Its swirling staircases and open floors are bathed in light from a ceiling that’s mostly glass. The place has become a favorite on Instagram, where some claim it’s the most beautiful bookstore in the world. (It has to be close.)

Descending toward the Dambovita River, things got a little grittier, with Renaissance apartment blocks in various states of (dis)repair, side-by-side with boxy buildings left over from the Soviet era. But even these buzz with life, residents sitting on benches outside, sometimes in a little tiny park in front, foot traffic heavy on the street. There’s graffiti art, and gilded churches with onion domes. I made my way along the river, crossing over footbridges, and then back.

Yes, there was probably still damage from all those upheavals, including the revolution in 1989. No, there won’t be any Notre Dame, or Pont Neuf; this isn’t the Seine. But I was happy nonetheless, seeing the deep blue of the river blend with the green spaces along the side, all of it in the heart of a European capital, plenty more of it for me to explore.

Fly: Bucharest’s Henri Coanda International Airport is the national hub, although from the U.S., you’ll probably need a connection to get there, perhaps via Paris, London, or Amsterdam. Happily, if you’re already in Europe, the airport is a major center for low-cost carriers, with dozens of cheap flights here on Ryanair and Wizz Air.

Stay: The Athenee Palace Hilton Bucharest was built in 1914 and maintains its historic feel, with a recent (and ongoing) renovation adding modern touches and comforts, especially in overhauled guest rooms. The hotel overlooks a lovely urban park, there’s a restaurant serving Romanian favorites, and it’s just steps from Revolution Square and the Romanian Athenaeum, the country’s most famous concert hall.

Getting Around: The city is well-serviced by public transit, including buses, trams, and a metro system that offers five lines and 62 stations. However, you may be tempted to just take a ride-share service, which is priced for locals and thus, very reasonable.

Take Note: If you speak a Slavic language and assume it will be easy to communicate locally, you’ll be surprised—Romanian is a Romance language, whose closest cousin is Italian. However, most people working in the service industry, including hotels and restaurants, speak English.