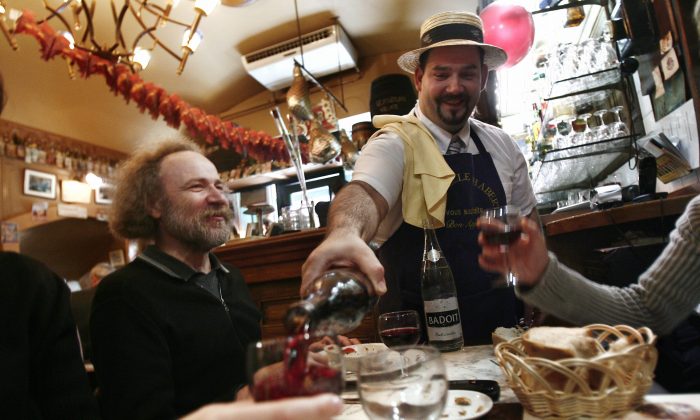 Beaujolais Nouveau: Much Ado About Nothing

With their current interest in craft beer, cider, and even hard seltzer, younger buyers of alcoholic beverages should be perfectly set up to get excited about a wine that isn’t legal to sell before the third Thursday in November, by French law.

Called Beaujolais Nouveau, it’s the first wine of the year. Just a few weeks ago, it was still grapes on vines. It was made quickly and calls for almost no aging in the cellar. As soon as bubbles stop coming up from the bottom of the fermentation tank, it’s bottled and readied for market.

Almost an artifact of marketing people, it’s a simple, quaffable beverage that usually doesn’t even make it into wine glasses. Water glasses are perfectly fine, and nobody speaks about the quality. As long as it’s wet, it’ll do the job.

This is not serious wine. That’s why it’s often taken by real wine lovers as a joke. Say the phrase Beaujolais Nouveau in a crowded theater, and you’ll produce a stampede: some people rushing to get some, others running to get away from it.

This year, the first legal date to release the first wine of the year is Nov. 18. Wine lovers say Beaujolais Nouveau isn’t even wine at all! Purists say it’s merely grape juice with alcohol, a frivolity with no redeeming social value.

But in tourist-plagued Paris, we’ll see placards saying, “Le Beaujolais Nouveau est arrive!” And many will delight in the Bacchanalian rites that go with this day.

The release of Nouveau (as it’s called for short) is one of the silliest promotions in the world of wine. At midnight on the third Thursday of November, the French government has decreed, the wine may be shipped to market. So there’s a rush of epic proportions to see it arrive before it deteriorates.

That’s the only explanation I can give for this folly.

Getting the stuff to market, an affectation in and of itself, may be outdone only by the pretension of ascertaining its quality.

“Wine experts” of all stripes hold wine glasses aloft to examine its color while the blood drains from their arms. We hear proclamations that the wine is good.

It has all the meaning of Groundhog Day.

Understanding this wine is easy. You chill it down (yes, a red you may chill!), you splash some into a glass, and you slug it down.

Do not take a tiny sip and pontificate on its hedonistic impenetrability. And for heaven’s sake, don’t score it.

Beaujolais Nouveau is for gulping.

The French drink this wine not as an experience as much as a quaff, and they do so at lunchtime, before dinner, throughout dinner, and late at night. Some do it before breakfast.

And they do it on picnics, patios, in hot tubs, and any other place where the thought strikes them. It’s a bistro wine, not a wine for the gourmet table. As such, its price should be no more than about $5 a bottle—but you may be asked to pay $8 or $9.

When young, Nouveau has a fresh, fruity aroma of berries and is evanescent; drink it young or it’ll lose its fruit, and then all that will be left is wet, red, and lackluster.

The leading Nouveau producer, George Duboeuf, will again lead the winner’s parade with Nouveau. At least a dozen other good-sized houses from Beaujolais will be here as well, although Duboeuf always gets the lion’s share of ink.

But don’t buy into the hype. Quality is not the issue. With Nouveau, the fact that the grapes survived another year is enough to celebrate.