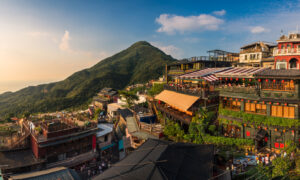 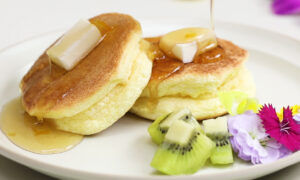 3 Ways to Brighten up Your Cooking With Sweet, Citrusy Yuja Marmalade
0 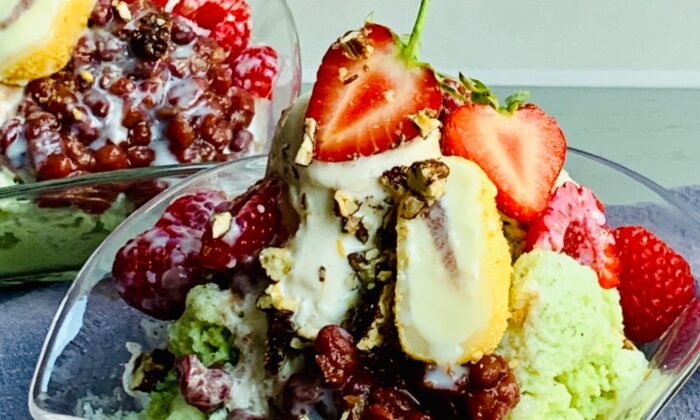 A tower of fluffy, snow-like shaved ice is the base for every bingsu. From there, the flavor and topping possibilities are endless. (Judy Joo)
Food & Dining

A tower of fluffy, snow-like shaved ice is the base for every bingsu. From there, the topping possibilities are endless
By Judy Joo
Print

Every summer, my mom would break out our little Snoopy Sno-Cone machine to make patbingsu. Literally translated as “red bean shaved ice,” this refreshing Korean dessert was, and still is, my most favorite taste of summer.

Our plastic Snoopy ice shaver was rather cumbersome, and didn’t work very well, but nonetheless, snow-like flakes eventually emerged and piled high in our bowls. My mom would top the pillowy mounds with a generous scoop of sweet red beans, then add some vibrant color with a few spoonfuls of Del Monte canned fruit cocktail or mandarin oranges (my personal favorite), syrup and all.

Next came a drizzle of condensed milk, which added some welcome creaminess, and a scoop of vanilla ice cream. A swirl of Reddi-Wip finished it all off in style, and my sister and I would devour our Korean “sundaes” with grand enthusiasm.

But long before Del Monte and Reddi-Wip, shaved ice desserts such as patbingsu—or bingsu, sans the red bean—were delighting palates for years.

In China, there are records of simple ice and fruit dishes being served as early as the seventh century. These icy treats eventually evolved into what is now called “bao bing,” meaning “shaved ice,” a dessert of thin, ribboned ice often topped with fruit, jellies, taro, peanuts, and mochi.

The idea of shaved ice quickly spread around Asia, particularly among the noble classes. It was introduced to Japan during the Heian period (794–1185) and became known there as kakigori.

Korea’s history of bingsu begins during the Joseon dynasty (1392–1897) when it was originally a simple treat of shaved ice with red bean porridge, an addition most likely inspired by patjuk, a traditional red bean soup. Red beans (and red-colored foods in general) were believed to ward off evil spirits and bad omens, and, as a result, were a popular addition to many dishes. Later, when sugar became more available, a sweetened red bean paste became the standard.

Bingsu’s key distinguishing factor is the texture of the ice. The ice is shaved to yield a light and fluffy snow, which melts in your mouth immediately—a texture decidedly different from that of American snow cones, which are made from crushed ice. It may sound like a small nuance, but it is akin to eating fresh, airy snow versus hard, crunchy ice pellets.

Traditionally, large ice blocks were shaved using a hand-cranked device fitted with a blade that spun around the ice, creating those fluffy, snow-like pieces. Nowadays, electric shavers are more common, but many street vendors, particularly in Japan, still use these manual machines.

Bingsu, unlike some other shaved ice desserts, evolved with a focus on the toppings. Over the years, different adornments were added, including fresh fruit, misugaru (a powder of ground nuts, beans, and grains), and chapssaltteok (chewy rice cakes). These toppings, along with sweetened red beans, are still considered the most classic today.

Now, bingsu’s flavor combinations are limitless. The ice itself is often flavored, too, adding even more fun to the mix. You’ll find everything from green tea, mango, and strawberry to more creative concoctions such as cheesecake, salted caramel, and black sesame.

In Korea, the summer months bring forth a very competitive market for bingsu.

“Every five-star hotel lounge launches a special new version of bingsu,” said chef Justin Lee, owner of JL Dessert Bar in Seoul. “One of the most popular kinds right now is the Jeju apple mango bingsu at the Hotel Shila—they sell about 300 per day. There’s even a Moet Chandon Champagne bingsu—it’s the most expensive one in the city.”

Lee has also been trying to get into the bingsu game himself. He stresses that the sweet red bean paste is vital: it “must be cooked well, and of good quality,” he said. His secret is to add some Valrhona cocoa powder into the paste, as the deep, chocolatey bitterness helps balance out the sweetness.

In London, pastry chef Mi Kyung Jeong makes a Pimm’s Cup and yuja (yuzu) bingsu to appeal to local tastes. It is a sophisticated version topped with a cucumber and perilla leaf sorbet, and all of Pimm’s traditional fruit for garnish—strawberries, blueberries, cucumber, and orange slices. She believes that bingsu’s great appeal lies in the variety of toppings: “I love creating different bites. All of the additions give a different flavor and texture with every spoonful.”

Eunji Lee, the Michelin-starred pastry chef of Junsik in New York City, has also often incorporated artisanal versions of bingsu on her tasting menus. She finds it to be a great palate cleanser, “sweet and refreshing.”

Bingsu ice machines have also progressed with modern times, making it possible to make really soft ice, like “snow powder,” Eunji said. The ice itself is now usually flavored ahead of time and frozen into bricks, which are then shaved down with high-tech machines.

But for many Koreans, it’s not the fancy flavorings or toppings that make bingsu so popular. It’s the sharing element ingrained in the dessert: it’s usually always made for at least two people.

“It’s a dessert to share with your friends or family,” Eunji explained.

It’s a good thing, too, that bingsu is usually served in large and generous portions. I trained myself to eat it ridiculously fast, as I was always competing with my sister. I have vivid memories of trying to power through some serious brain freeze in order to ensure that I’d snag the best bites: the elusive cherries in the canned fruit cocktail, and the chewy-sweet rice cakes.

And even though there are so many elevated versions of bingsu these days, my mother’s humble, homemade version is still my favorite—even though everything came out of a can!

Similarly, Jeong still fondly remembers the classic bingsu she ate in Seoul as a child, a far cry from her own sophisticated Pimm’s-inspired recipe. Her mom would make it with simply red beans, rice cakes, and condensed milk.

“It was very traditional,” she said, and having it on a hot summer’s day made her feel like she was “transported to the North Pole. My brother and I would just dig into this snow like sweet heaven in a bowl,” she happily recalled.

You don’t need anything fancy to make it special—just Snoopy and some elbow grease.

So find a friend and seek out a bowl of bingsu, whether simple or sophisticated, to cool down and escape the summer, one bite at a time.