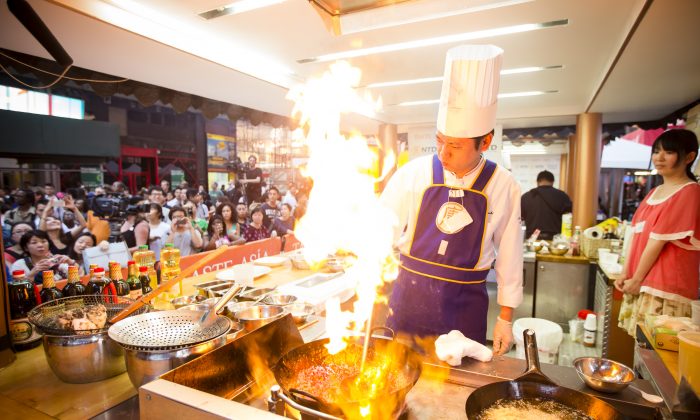 NEW YORK—The sun felt about as hot as the woks that turned Times Square into the heart of a Chinese culinary competition Thursday.

For the sixth year now, New Tang Dynasty Television has brought together chefs from around the world in a competition to make the tastiest, most authentic dishes from five regions of China—Canton, Shandong, Huaiyang, Sichuan, and the Northeast.

“The mission is to introduce the traditional, authentic Chinese food and culture to the Western society and also to the Asian people because this has been almost lost in China,” said John Tang, the president of NTD. “We are trying to rediscover this authentic food culture.”

Hosts explained the difference in flavor, texture, and history of each the regions as well as the cultural wisdom that is ingrained in Chinese cuisine.

“Nutrition is one of the two pillars of traditional Chinese cuisine,” read one host.

“The ancient Chinese did not draw distinction between food and medicine … The sour benefits the liver, spiciness benefits the lung, bitterness the heart, savoriness the kidney, and sweetness the spleen,” another read.

Fourteen chefs from the United States, Germany, Canada, Taiwan, and Japan competed, with five of them taking home gold and a $5,000 prize.

“The levels of the competitors are very good, we found that they are all at a pretty high level,” said Tikal Yang, one of the judges. She added that the cooking conditions were not ideal but the chefs did well with the time constraints and working in a makeshift kitchen.

Restaurants participating in the Taste Asia Restaurant Month, which started in May—Asian-Pacific American Heritage Month—lined the square, tempting passersby with food samples and other freebies. This is the fist time NTD has branched out to include all Asian cuisine in its culinary festivities. Tang said the festival has been such a success, it is here to stay.

NTD is the largest Chinese-language TV network in North America. According to the company’s website, its mission is to broadcast news that is uncensored by the Chinese government into mainland China, to revive traditional Chinese culture, and to bridge the gap between East and West.

Taste Asia is presented by NTD Television and Epoch Times.