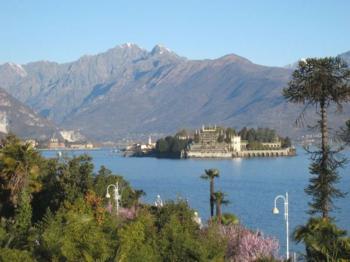 Fields of lush green rice growing accompany the traveler from Alessandria in the south of Piedmont to Lake Maggiore. The Germans call this lake, which is the second largest in this Italian region after Lake Garda, the Langensee (Long Lea). Thirteen kilometers of its northern end reaches into Switzerland, to the Tessin region, Locarno, and Ascona. Its eastern shores belong to Italy's Lombardi. It constitutes the lowest point above sea level in the entire country.

Parts of the Piedmont region are fascinating. The mansion-rich city of Stresa is the starting point for a short boat ride to the Borromäic Islands. The noble Borromeo family owns three idyllic islands. Their Borromeo Island palace hails from the 17th century and has been a revenue producer for the Borromeos since 1870, because a major portion is open to the public for viewing. Adults pay 11 Euro (approximately US$13.70) entrance fee, and groups pay 8 Euro (approximately US$10) per person.

Visitors will behold bombastic architectural features that find their highlight in a grotto. The structure, erected just above the cooling waters, was meant as a summer residence, but never used! Construction took 100 years, and the planned decorative water cascades and fountains never worked.

One of a kind gifts from far and near are on display, such as an ivory horse saddle from the 15th century and an extravagant table for flowers, a gift to the Booromeo family from Pope Leo XII in 1825. Other items on display are collections of prehistoric treasures, a wooden boat from the 5th century BCE, and Belgian tapestries. Each one of the tapestries required the weaving skills of 50 persons for ten years!

The Borromeo family crest motto, "humilitas," (meaning humility) can be found throughout the property. Next, one encounters the terraced, baroque garden with its multitudes of statuary, one of them a unicorn, the Borromeo family's symbol, signifying strength and beauty.

The mild climate supports the growth of 200 types of camellias, the Lake Maggiore symbol; rare peacocks frolic amid bright-yellow drifts of mimosas. Espaliered tropical fruit peek out from along the walls, and terracotta pots hold small tress along the stone walls.

The palace houses a private puppetry theater. The characters make one believe that even during the 18th and 19th century, people found entertainment in the horror genre, with vampires, skeletons, and dragons.

Ortasee (in German), Lago d‘Orta (Lake Orta) in Italian is close by. It has been a favorite location for a series of films that like the fishing village's medieval ambience. One statue of German actor/director Carl Heinz Schroth (1902-89), looks toward the Island of San Giulio, to “Hortus Conclusus,” a closed garden, the site of a secluded Benedictine Nunnery. Their singing can be heard during Sunday mass.

The numerous restaurants in Orta that tourists can access overrun this small, car-free village with its narrow alleys and flower-laden balconies. But only a few hardy souls attempt the steep climb to the yellow baroque church, and further on to the panorama lookout point at Sacro Monte, the "Holy Mountain."

In this area, mirroring a crossroad, there are 20 chapels that picture Franz of Assisi's life. He lived a life similar to that of Jesus. The place exists since 1590. UNESCO designated Sacro Monte in 2003 as a World Heritage Site. This is a place where one can find peace.

The evening is free to dream—on a bench next to actor Carl Heinz Schroth's statue, listening to the birds and beholding the mirror-like lake, and looking toward San Giulio Island…

The Article provide by Elke Backertas as courtesy