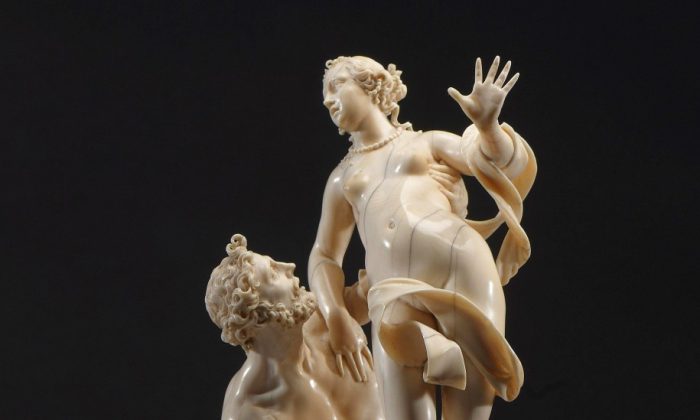 NEW YORK—To the delight of art scholars and collectors, a masterpiece of baroque ivory carving has re-emerged. It was previously known to the public only through an old photograph. “Pluto and Proserpina” is one of six or seven works by Matthias Steinl, considered one of the world’s greatest ivory sculptors, to survive.

New York’s Blumka Gallery, and Germany-based Kunsthandlung Julius Böhler, are presenting Collecting Treasures of the Past VII, an exhibition of exceptional medieval, Renaissance, and baroque objects until Feb. 10 at Blumka Gallery, in Manhattan.

Of the 80 historically significant sculptures and artifacts on view, the two entwined lovers depicted in “Pluto and Proserpina,” valued at $3.8 million, are clearly the stars. The artist, Matthias Steinl (1643/44–1727), was an imperial court sculptor in Vienna.

The show, which opened on Jan. 26, has so far been a great success, according to Anthony Blumka, the owner and curator, with 18 works sold thus far. Many of the other works also stand alone as examples of the best in the market.

“I am expecting a museum to buy [‘Pluto and Proserpina’], but you never know, we have half a dozen individuals, private collectors who are interested too,” explained gallery owner and curator Anthony Blumka.

“We’re in no hurry to sell it. It could easily be the most important item we’ve ever had, or may ever have.”

Blumka’s high regard for the 10 1/4-inch ivory is significant. Both Blumka Gallery and Kunsthandlung Julius Böhler, established in the 19th century, are leading firms in European works of art. They have helped place many artifacts in some of the world’s most important museums, including the Metropolitan Museum of Art and the Treasury at the Cloisters in New York, as well as the Bavarian National Museum, in Germany, and the Louvre, in France.

“This unique carved ivory depicts the ancient Roman gods Pluto and Proserpina. According to the myth, Pluto, god of the underworld, is enraptured by Proserpina (the daughter of Ceres and the goddess of agriculture and crops),” according to the press release. “Their passionate love story forms the basis for the creation myth of winter.”

“‘Pluto and Proserpina’ … is an amazing rediscovery,” said Eike Schmidt, the head of the Department of Decorative Arts, Textiles, and Sculpture at the Minneapolis Institute of Art and the author of several books on ivory sculpture, in the release.

“The wafer-thin whirled draperies are carved in the same masterful way as Steinl’s ivories made for the Emperors Leopold I and Joseph I, which are all in the Kunsthistorisches Museum in Vienna now,” Schmidt said.

“Given the fact that the subject of ‘Pluto and Proserpina’ in its Baroque interpretation celebrates love, and as such, it was featured in operas composed for important weddings, I dare to speculate that the emperor might have commissioned this ivory as a wedding gift for an important prince close to his court, which would explain why it did not end up in the Kunsthistorisches Museum,” Schmidt said.

After the exhibit concludes, the collection will proceed to the highly distinguished European art and antiques fair, TEFAF, in Maastricht, the Netherlands, which runs March 16–25.